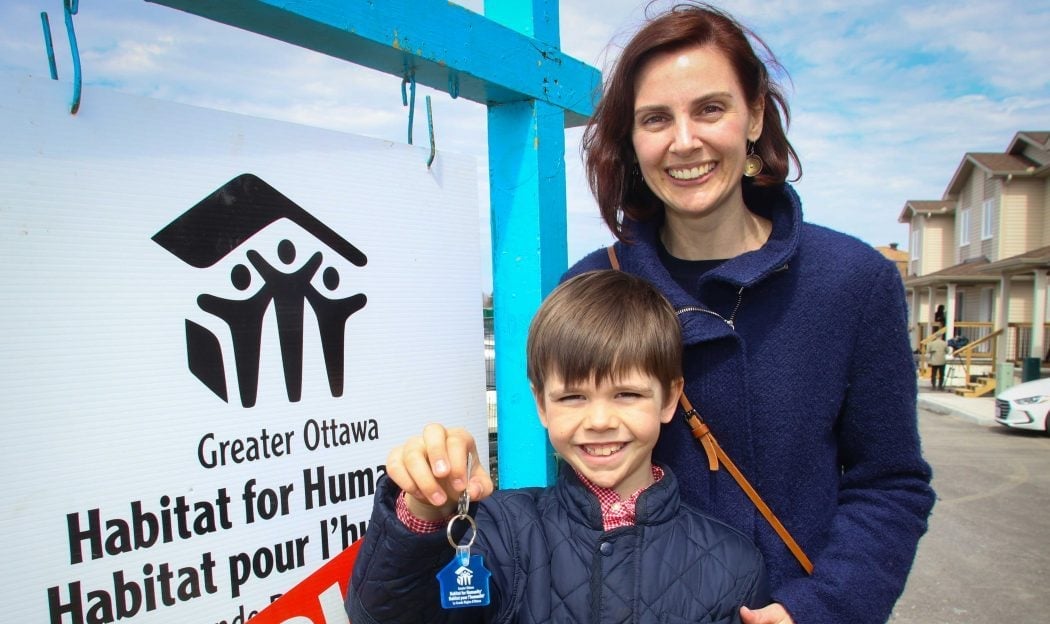 Rebecca and Jack get the key to their new home.
PHOTO CREDIT Barry Gray

A small family that has been spending 60 per cent of its income on rent is among those getting a fresh start in Orléans thanks to Habitat for Humanity.

Rebecca and her eight-year-old son, Jack, were one of three families at a recent key ceremony in Convent Glen attended by dignitaries, family, volunteers and Habitat staff. The families received the keys to their new townhomes built by Greater Ottawa Habitat for Humanity (HabitatGO) and its small army of volunteers. The homes are phase two in the ambitious, 16-unit Leacross Landing project that will be completed in the next year or so at the corner of Jeanne d’Arc Boulevard and Fortune Drive.

“My landlord is raising my rent by five per cent, and I’m already at the maximum of what I can afford,” said Rebecca, a single parent who works full time and volunteers with her son’s Beaver pack. “It’s been like this ever since (Jack and I) have been a pair.

“We don’t have a community in the area where we live now, and I’m looking forward to the community feel here, to Jack being able to spill out and have fun.”

“It think it will feel real when this is all over, and I can go inside and all my things are there,” she added.

Like other proud Habitat homeowners who would otherwise be unable to afford their own home, Rebecca will be responsible for paying off an interest-free mortgage. As well, she put in the “sweat equity” required by Habitat, logging 350 hours stocking shelves in the organization’s ReStore and helping insulate her new home. Her parents and stepmother drove from Peterborough to lend a hand with the work and to take care of Jack.

The family’s new home, like the others at Leacross Landing, is bright and cosy. Already, the enclave has the feeling of a little community within the broader one of Orléans.

More: Habitat for Humanity team gets the job done

Before the ceremony, HabitatGO’s interim executive director Marc Caron said, “This is what it’s all about — giving the keys to the families. We’ve helped them build their home, and this provides closure to the hard work we’ve all done.”

HabitatGO is celebrating its 25th anniversary in the capital. Asked about the need for Habitat in a relatively well-off area like ours, Caron said, “Who would have thought in a city like Ottawa we’d have this problem? But the need is still there, if it’s not even greater now with affordability getting harder and harder. It’s a problem in every city around the world and it seems to be getting worse.”

Pablo, Claire and their seven-year-old son, Santiago, were also at Leacross Landing to receive their key. 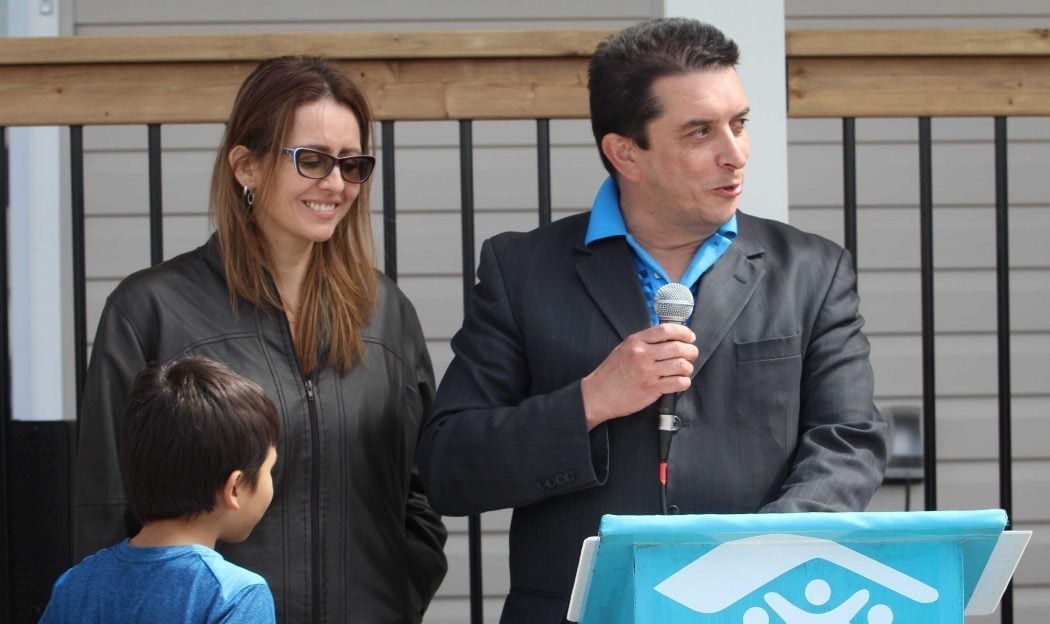 The family, including their 16-year-old son, Esteban, have struggled since moving from Colombia to Canada several years ago. Despite having three degrees, it took Pablo four years to finally find suitable work. He’s now employed in administration with the CISSO Gatineau Hospital, and Claire does maintenance for a janitorial service.

The family has had to move multiple times since arriving in Canada and has most recently been living in a neighbourhood with a high crime rate.

“Finally we have our space, a family space,” he said. “My sons are going to grow up in a nice neighbourhood.”

“(Santiago) can go to school across the street,” he added with a smile, pointing to Convent Glen Catholic School.

More: Habitat for Humanity homeowners get their keys in 2018

Angela and her two daughters were also on hand at the ceremony to get their key.

“I painted my mom’s room” as part of the family’s sweat equity, exclaimed one of the daughters.

“I got to use a Skilsaw and a reciprocating saw,” said her mother. “That was cool.”

Sponsors for the Orléans build include the Leacross Foundation, a locally based organization that supports the education of women and children. President Roslyn Bern was on hand at the ceremony to present a key to Rebecca and Jack.

She said the foundation was behind the build because it will offer a safe and comfortable place for the new homeowners. “If you don’t have a place to put your head at night, you can’t concentrate on keeping your family together, you can’t make money, you can’t live properly, and you’re under a lot of stress … This looks like a pretty safe place. I’d be pretty happy living here.”

As for young Jack, he knows exactly what he’s looking forward to: his new bedroom. “I think I get a bigger closet for my toys,” he said.

Rebecca explains what she’s looking forward to in her new home and community.

Volunteers and donations are the backbone of Habitat’s home building. Learn more here.

On the job: Habitat for Humanity builds in Orléans