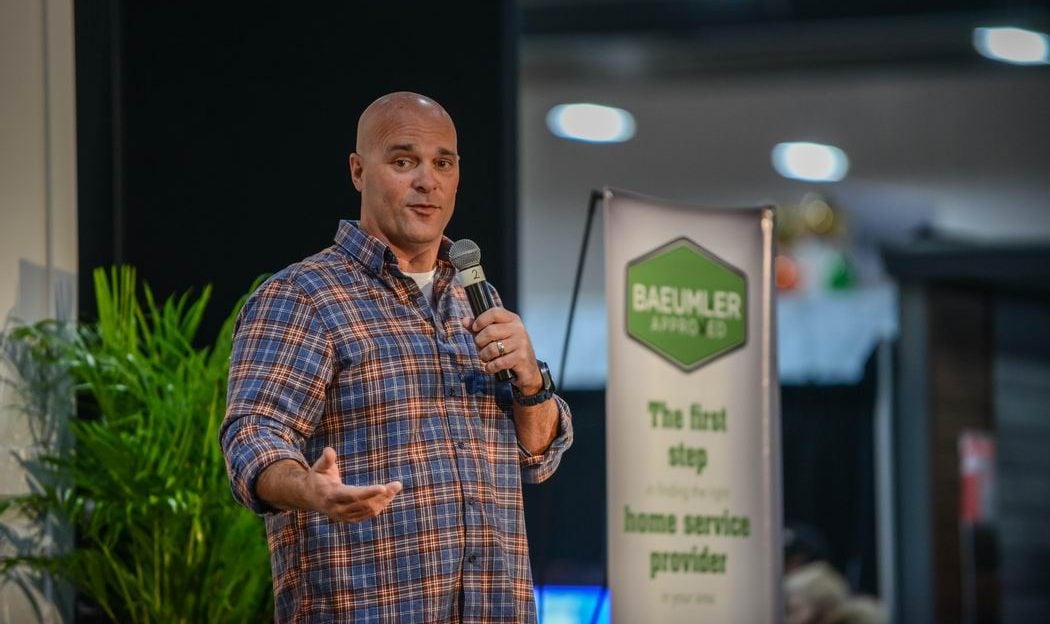 Celebrity contractor Bryan Baeumler was the headliner at the Ottawa Home Remodelling Show.

The single most important thing to watch for when hiring a contractor is the relationship, says celebrity contractor Bryan Baeumler.

Speaking at the Ottawa Home & Remodelling Show recently, the star of hit HGTV shows such as Bryan Inc., House of Bryan and Disaster DIY says he started his Baeumler Approved program as a way to help homeowners navigate the home improvement and building industry.

“What we help you do with Baeumler Approved is narrow down the search… (but) when things go sideways, whether it’s the marriage or in a contractor/builder/homeowner relationship, they go sideways very quickly, and they get very expensive and they get very ugly, they’re both the same.

“So, you have to choose a contractor the same way you choose a partner. You have to make sure that you trust them. A lot of people ask, ‘What’s the most important list of questions to ask your contractor when you walk through the house with them?’ and, I’ll be totally honest, if you still have a bunch of questions to ask after you’ve walked through the house with your contractor, you should call another contractor.” You should be so informed by the end of that walkthrough, he adds, that you’re ready to go.

Baeumler drew a standing-only crowd to his talk, where he offered an unscripted update on what’s happening with him these days and how he got started in both construction and show business, before devoting more than half of his allotted time to answering audience questions, all done in the candid and down-to-earth style seen on his shows. 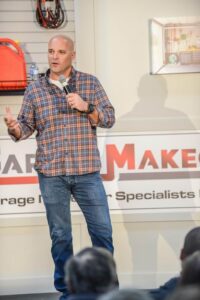 Season two of Bryan Inc. is now airing, in which the business side of his construction business is documented. Last year we saw how his wife, Sarah, had joined the company and worked with Bryan on custom home projects. This time, Sarah joins the renovation side and works with clients to help them realize their renovation dreams.

“Sarah gets raked over the coals a bit by the homeowners, which is great for me,” Baeumler jokes.

They’re also about to start production on a new project and show, having bought an abandoned resort in the Bahamas that they will fix up before turning it over to a longtime friend with experience in resorts to run it for them.

“It’s like it had a sign out front that said, ‘We’re looking for somebody a little crazy that owns a construction company and has a wife involved with design and has some ability to do this and likes manatees and dolphins,’ ” he says, noting that this is the first show he’s done where viewers will have access to it and be able to come down and hang out around the pool. (There will be contests as well.)

“In Canada, 80% of renos go 50% or more over budget,” he notes. Why? Because we change our minds or we find something we don’t expect. But it is possible to stay on budget, if we budget properly to begin with, he says. Surprises are going to come up, so plan for them. Then when something unexpected comes up, you compromise.

He recommends a 25-30% contingency fund, even if you think that’s too high. “I’ve been doing this long enough that I know you’re going to spend it,” he says. And take that contingency fund and put it somewhere where you can’t access it easily, like a six-month GIC. “Park it somewhere, make some interest on it. And when you get to the end of the job and you’re in the finishing stage and you’re making cuts and deciding what you want to do, that’s when you have access to that because (otherwise) it’s so easy just to spend it.”

Their cottage: Remember the cottage from House of Bryan, On The Rocks? They’ve since sold it because they just didn’t use it enough – and it was a lot of maintenance work for Bryan when they went up, taking away from his time to relax and enjoy it. They did buy the family cottage and 100 acres next door.

HGTV effect: “HGTV is a great source to inspire people that are watching to come to home shows like this,” Baeumler says, but you have to remember that it’s not reality. “It’s not the voice of the construction industry in Canada. It’s not the news, it’s not the documentary, it’s entertainment because it’s all cut up and edited.”

The other Bryan Inc.: Baeumler has now done almost 400 shows and owns not only his shows, but the production company and international distribution rights (his shows are in 32 countries).

The “right way”: “Twenty-five per cent of your house is building science, but 75% is an artist with their two hands putting things into place so there’s a lot of ways to do things properly,” he says. “With that being said, there’s thousands of ways to screw it up.”

24 Sussex: There’s been much debate about whether to renovate the prime minister’s residence or demolish it and build new. Baeumler’s take: “It’s an old house. It’s not irreparable, it’s not above being repaired. The prices that are being thrown around are – I would like to come to Ottawa to get some of those jobs – but it’s a house, there’s tons of qualified great contractors. Would I like to do it? Yeah, it’d be fun, but there’s lots of great guys.”

On spray foam: Baeumler says he wouldn’t use batt insulation, which is cheaper, he’d cut back somewhere else in the budget to be able to fit it in. “It’s probably the No. 1 thing that I recommend to do, to save money somewhere else because it will pay you back forever.”