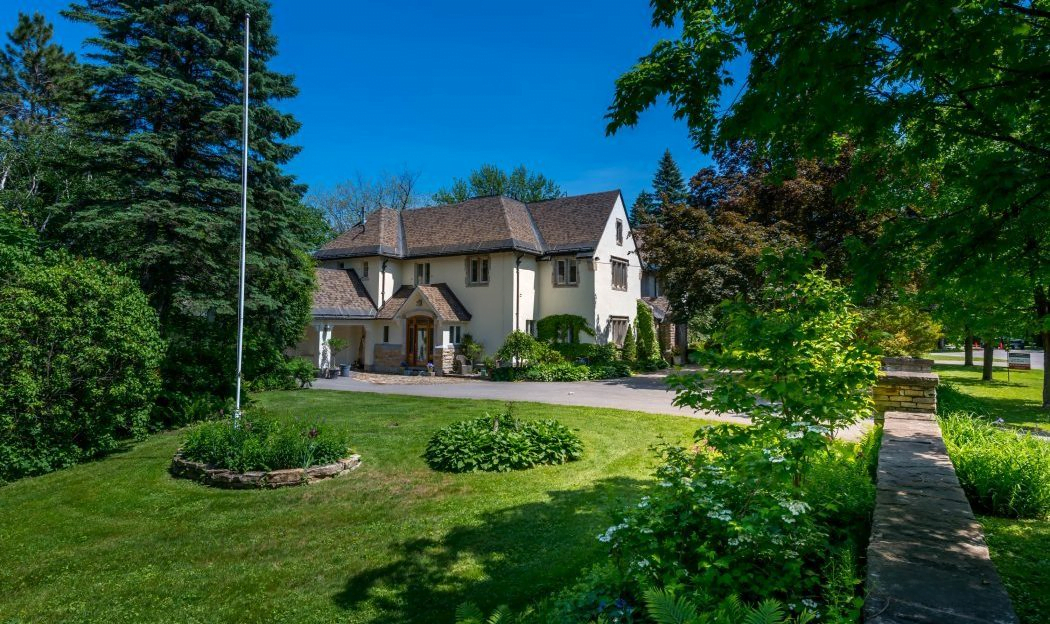 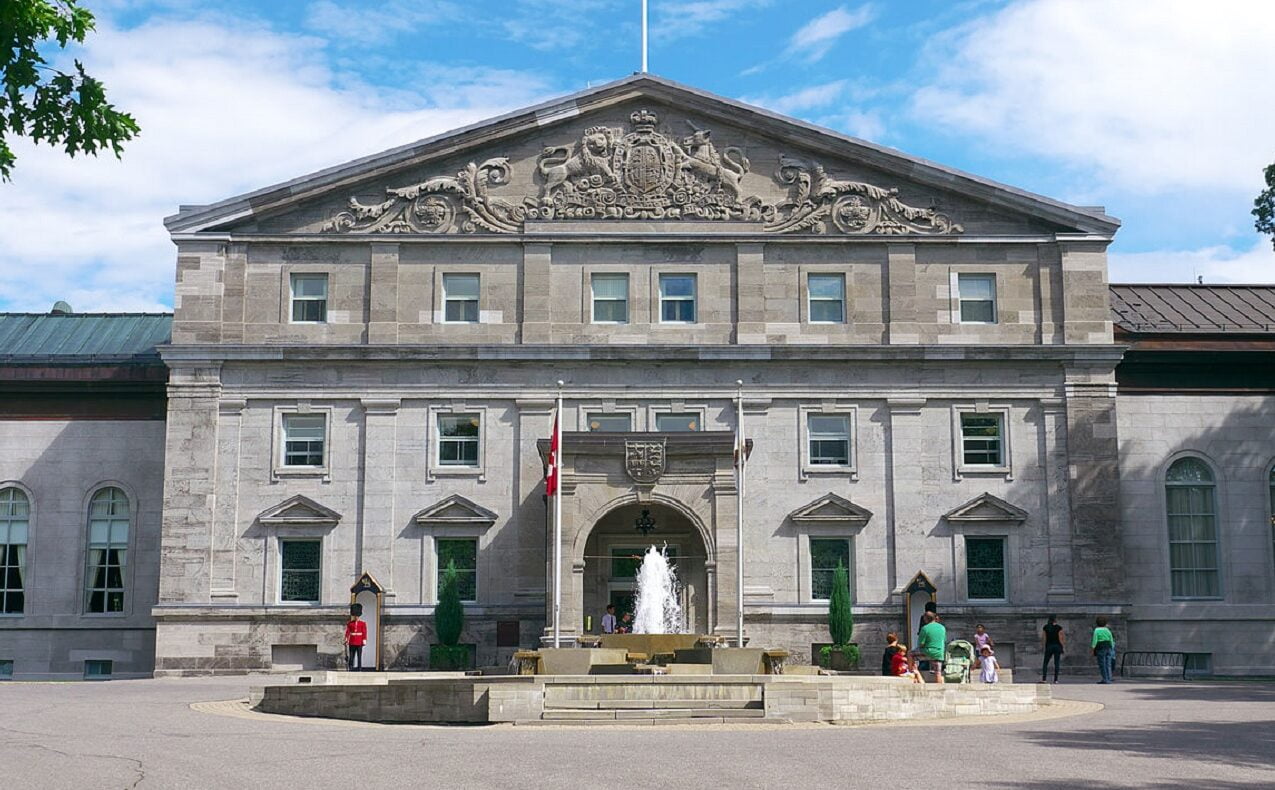 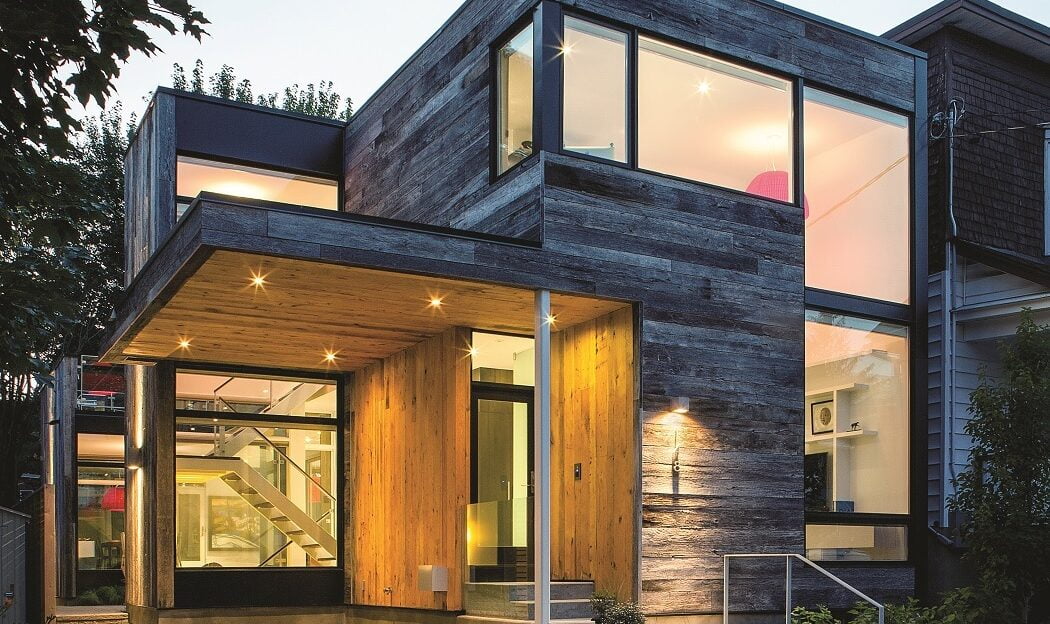 Photo credit: Dream Properties
Large homes on spacious lots are the norm in Rockcliffe Park.
Photo credit: Paul Tavares
Rideau Hall in New Edinburgh is the official residence of the Governor General of Canada.
Zen Barn is an award-winning home in New Edinburgh by Christopher Simmonds Architect and RND Construction.

The Ottawa River on the north, Stanley Avenue, Beechwood Avenue Hemlock Road on the south, the Rideau River on the west, and the Aviation Parkway and Sir George-Étienne Cartier Parkway on the east. 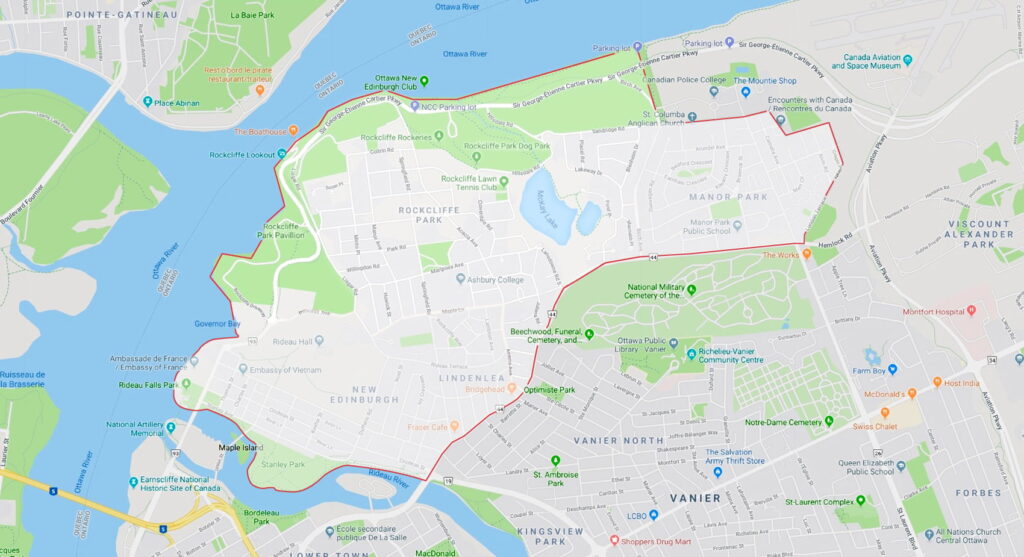 Scottish stonemason and businessman Thomas McKay, who helped build the Rideau Canal, bought land next to Rideau Falls in 1829 to build a sawmill and gristmill. The village of New Edinburgh grew up nearby to house both mill workers and the entrepreneurs who owned nearby industrial facilities. McKay’s son-in-law, Thomas Keefer, started laying out the winding streets of adjacent Rockcliffe Park in 1864. It evolved into an affluent area known for its heritage mansions and was designated a Heritage Conservation District in 1977. Nearby Lindenlea began as a planned community for veterans returning from the First World War, while Manor Park was built for a similar clientele after the Second World War.

Political and diplomatic residences give Rockcliffe Park–New Edinburgh–Manor Park–Lindenlea its unique cachet. Rideau Hall is home to the governor general, while 24 Sussex (currently under renovation) is normally home to the prime minister, and the leader of the opposition lives at Stornoway. Numerous embassies, high commissions and associated residences dot the neighbourhood, particularly along the leafy streets of Rockcliffe Park. The British High Commission and the French Embassy are landmarks on Sussex Drive.

One of Ottawa’s wealthiest neighbourhoods, Rockcliffe Park is a quiet, mature enclave of 2,400 residents. Adjoining it to the east is the small residential community of Manor Park, with a population of about 2,900 people. South of Rockcliffe Park is New Edinburgh, which has seen some infill housing projects in recent years. Immediately east of New Edinburgh is Lindenlea, with about 1,800 residents.

Just beyond the neighbourhood, sites of note include the ByWard Market, the Vanier Museopark, the RCMP Musical Ride Centre, the Canada Aviation and Space Museum, Beechwood Cemetery, the headquarters of Global Affairs Canada, a National Research Council of Canada site, and Hôpital Montfort.

All four major school boards are represented, with both elementary and secondary schools found in or near the community:

There are also private schools in the neighbourhood, including Elmwood School, Ashbury College, Macdonald-Cartier Academy and Fern Hill School.

Schools, embassies, the Royal Canadian Geographical Society and Rideau Hall are among the major employers in the neighbourhood. Many of the shops and restaurants in this area are clustered along or near Beechwood Avenue, between Crichton Street and Putman Avenue (sometimes referred to as Beechwood Village). Storefront businesses are not permitted in Rockcliffe Park. Businesses in Rockcliffe Park–New Edinburgh–Manor Park–Lindenlea include:

One of the major attractions of this area is its abundance of green space and recreational facilities, including multi-use pathways along the Rideau and Ottawa rivers,  and parkland and a rink at Rideau Hall. Amenities include:

As with businesses, many services — including a dental office, a veterinary hospital and a gas station — are concentrated along Beechwood Avenue. Churches of various denominations are scattered across the neighbourhood. There are also several community associations, including:

OC Transpo operates multiple routes through the neighbourhood. The Vanier Parkway and St. Laurent Boulevard connect the neighbourhood to the Queensway (Highway 417). The Sir George-Etienne Cartier Parkway along the Ottawa River provides a scenic connection to downtown and Ottawa’s east end. Multi-use pathways along the Rideau and Ottawa rivers are traffic-free commuting options for cyclists and pedestrians.