On the job: Habitat for Humanity builds in Orléans 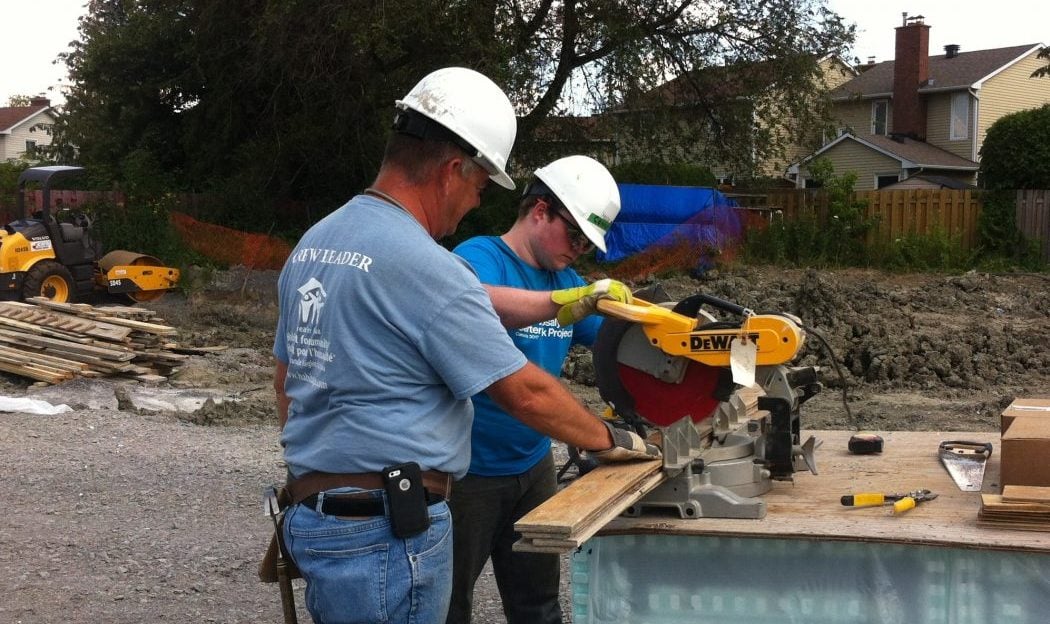 The popsicles arrived at just the right moment: It was mid-July, we were hot, sticky and tired, and those sweet concoctions were exactly what we needed after six hours on a Habitat for Humanity building site in Orléans on a day when a fellow would happily sell his soul for a breeze and some cloud cover.

Not that any of the dozen-plus volunteers was really grumbling. In fact, humour, determination and camaraderie marked this group, many of whom were strangers to each other and ranged from eager beavers in their 20s to folks who will never again see 65.

We were at the corner of Jeanne d’Arc Boulevard and Fortune Drive to help on the most ambitious project yet undertaken by Greater Ottawa Habitat for Humanity: 16 townhomes being built in blocks of four over the next three to four years.

In keeping with Habitat’s mandate, the homes are for low-income, working families living in inadequate housing. But this is no give-away. Each family puts in 500 hours of “sweat equity” at the site or elsewhere, and they pay for the homes through interest-free mortgages.

Habitat’s premise is that homeownership helps break the cycle of poverty facing many low-income working families.

Habitat’s commitment to others is one reason volunteers return year after year to lug lumber, clamber up and down ladders, or – as we did – help prepare for the imminent pouring of the foundation for the first block of homes.

Jorgen Rasmussen, who also volunteers at Habitat’s ReStore and who made his living as a plumber for over four decades, had driven in from Metcalfe. During morning break in the bare-bones site trailer, he explained his daughter had been a Habitat homeowner.

“So I thought I’d give back. I imagine I’ll end up doing some plumbing (on this build). In the meantime, I’m happy to do whatever they need. There’s not much on a construction site I don’t know.”

Glancing at the volunteers joking with each other as they headed back to work after lunch a couple of hours later, site liaison and den mother Linda LeBlanc said, “If we could bring this type of attitude to a regular workplace, everything would be fantastic.”

You don’t have to be a tradesperson to help with a Habitat build, but you do need to be ready to learn.

Crew leaders – there were four the day we were in Orléans – teach you what you need to know. Never run a table saw? Someone will show you how and make darn sure you do it safely. They’ll also teach you how to grip a hammer properly, show you how to bend lengths of rebar, and remind you to don your hard hat (hats and safety boots are provided if you don’t own any).

Those same leaders, at least the ones that day in Orléans, are also a collective font of funny stories about past builds, good-natured digs at their fellow bosses, and an apparently inexhaustible store of energy and optimism.

With bosses like that, it’s little wonder volunteers come back time and again to Habitat builds.

Homeowners won’t be moving into their new digs for months yet, but the day new owners accept the key to their home is always a celebratory one.

The families – some of whom have gotten to know each other during the Habitat process – gather for the ceremony. Children chatter excitedly or hang back shyly. Mothers and fathers listen attentively to the introductory remarks by local politicians and Habitat representatives. Folks who volunteered on the build watch proceedings with pride. The handing over of the keys is an emotional event, and even those who have witnessed it a dozen times shed a couple of tears.

“It’s a really moving moment for everyone,” said Jenny Grenville, Habitat’s volunteer coordinator, in Orléans when that moment was still well in the future and those homes still mostly a large hole in the ground.

Clément Pelette, one of the volunteers that same day, won’t be around when the keys are handed over. A civil engineering student in Nantes, France, he was offered a chance to spend a few months in Ottawa learning English and completing one of his apprenticeship requirements. Ceremony or not, he was sold on the Habitat experience.

Asked if he was enjoying himself, he smiled and said, “Yeah, very good.”