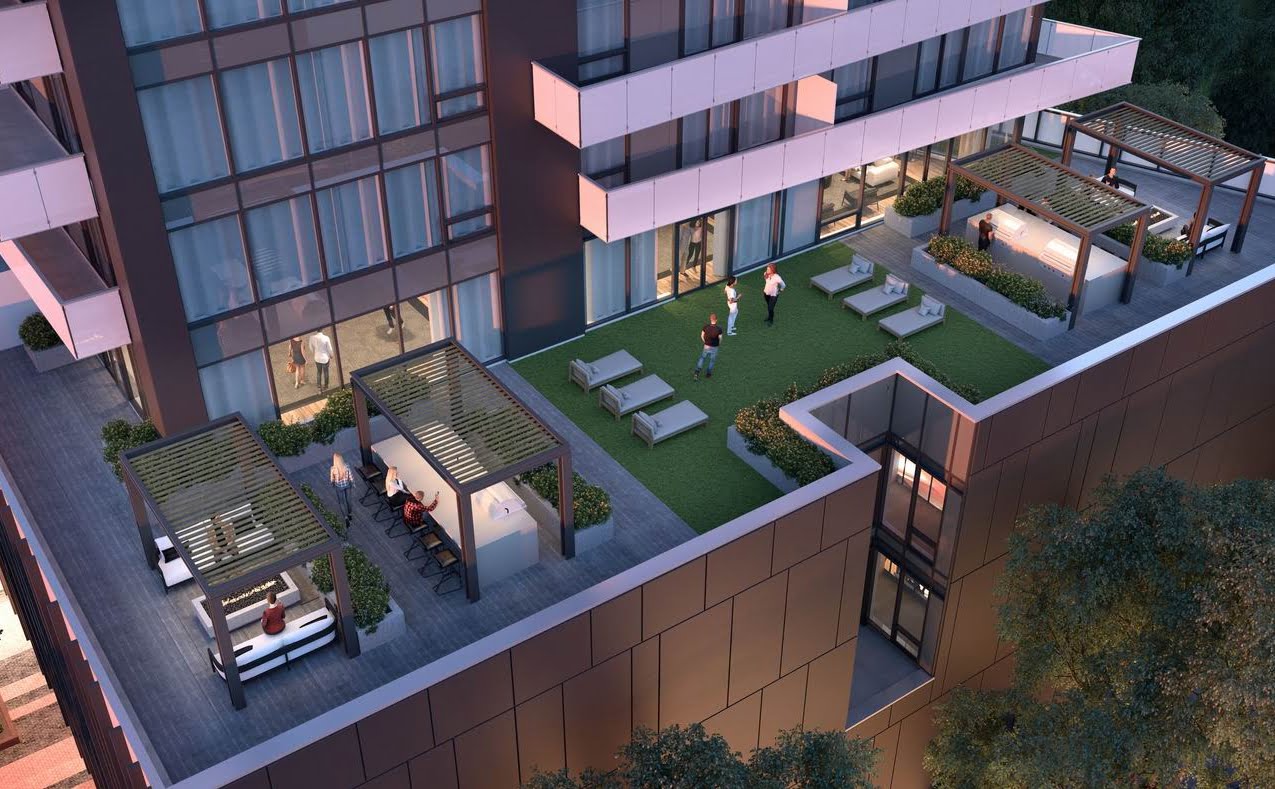 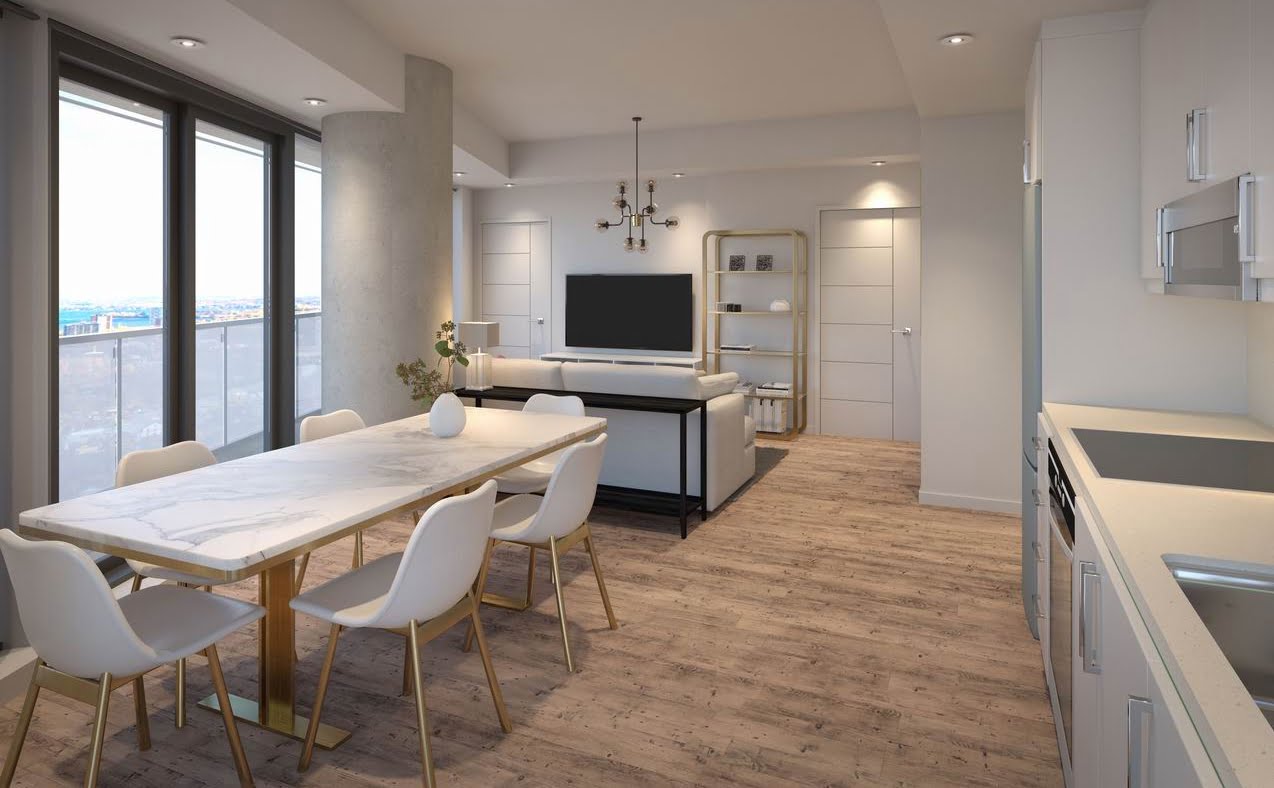 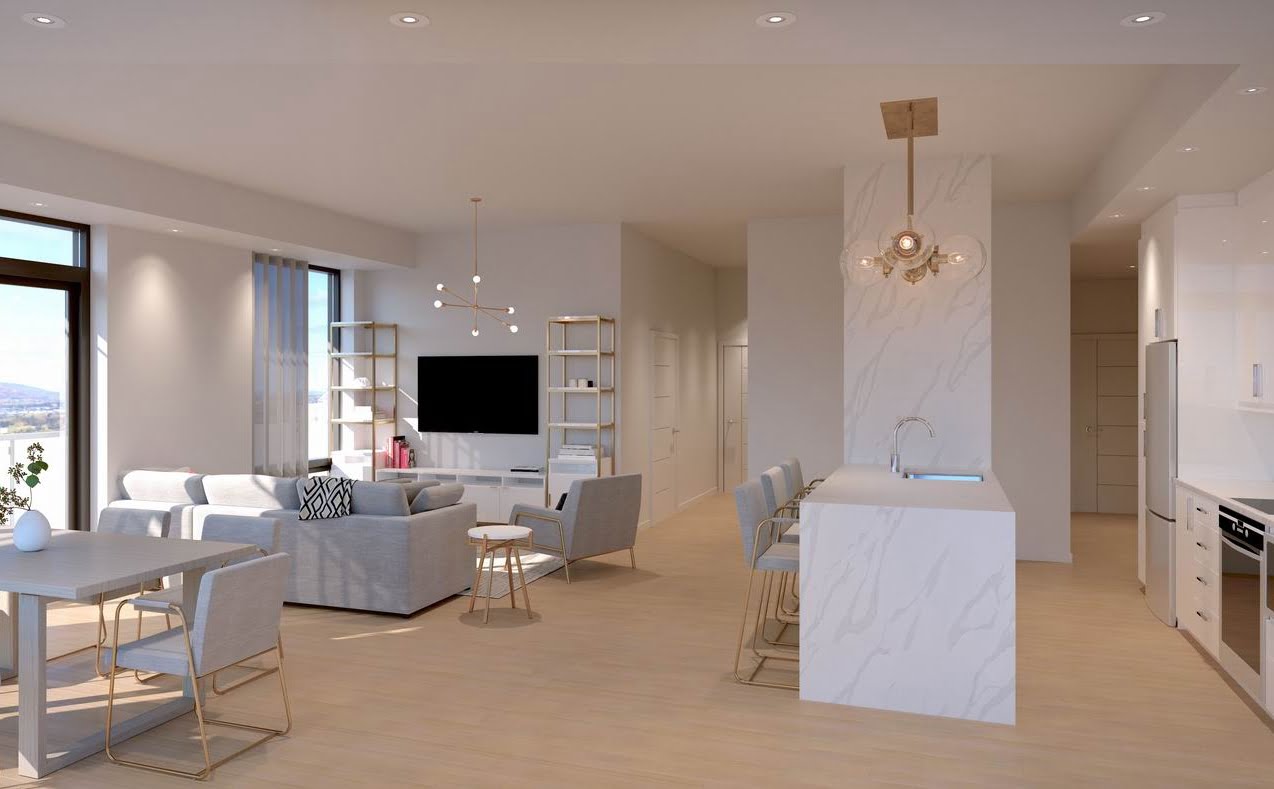 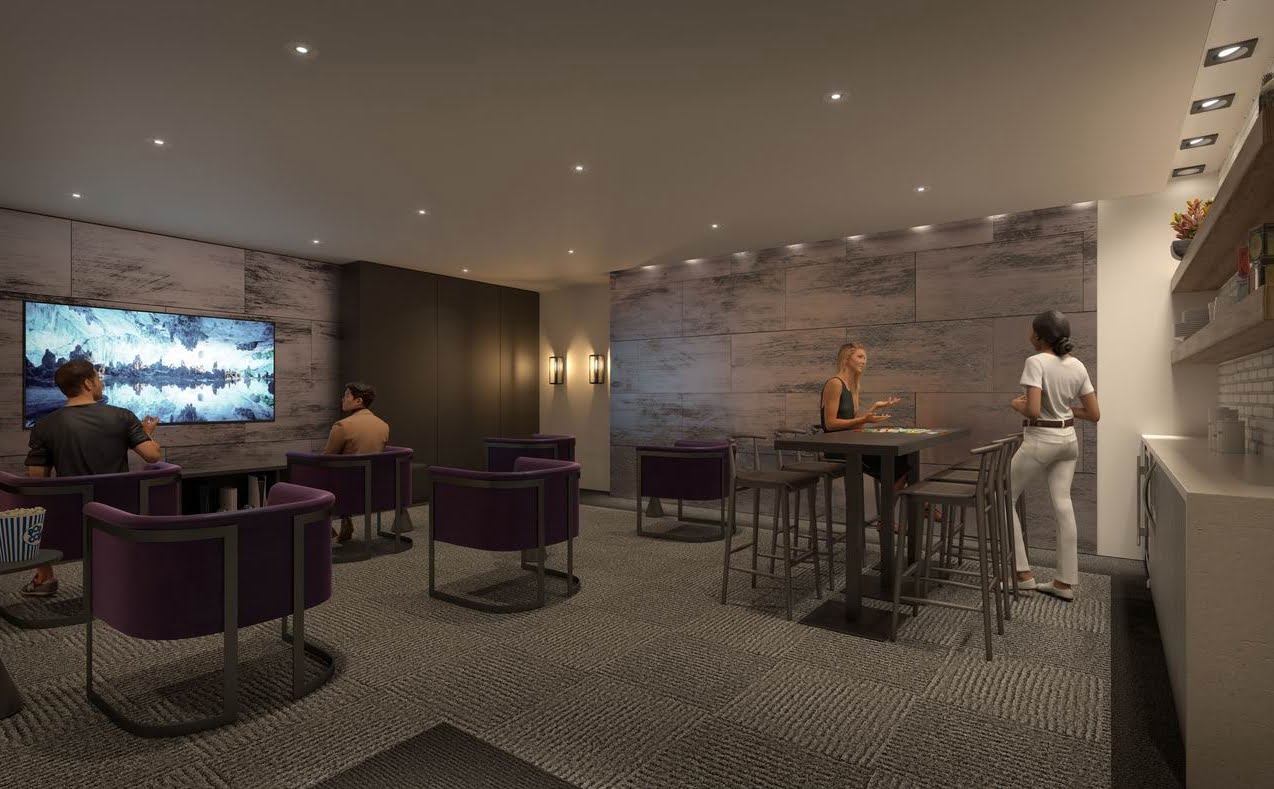 Claridge Hintonburg is a 30-storey condo tower on Somerset Street West near Preston Street.
Units come with engineered hardwood, contemporary kitchens and quartz or granite counters.
There are 12 penthouse units on the top two floors, ranging from 860 to 1,260 sq. ft.
Amenities include a theatre room.

The skyline at the north end of Hintonburg is about to get a whole lot higher as Claridge launches its latest condo tower.

Boasting unobstructed views in every direction, including overlooking the Ottawa River, Claridge Hintonburg is set to rise along Somerset Street West next to the O-Train line near Preston Street. It launched June 26 offering 30 floor plans and 262 units spanning 30 floors.

“It was our first (launch) doing a virtual release,” says sales and marketing manager Amanda Dicerni, who was pleased with how things went. As of late afternoon June 29, more than 10 per cent of the building — or 30 units — had been reserved with staff following up to firm up sales.

“It’s a great time to be building and selling there,” says chief operating officer Shawn Malhotra. Noting that Claridge bought the property in 2014, he said the company was “waiting and watching to see what the right time was… Surprisingly through COVID, the market has been extremely hot and condo sales, housing sales are all booming right now so we felt it was a good time to get the project into the market.”

Fourth on the go

It’s the fourth condo tower Claridge has on the go right now, joining Icon in nearby Little Italy and Claridge Moon and Claridge Royale downtown.

Unlike its other condo projects, which Claridge design co-ordinator Kayla Pollock describes as modern urban, Claridge Hintonburg takes its cue from the neighbourhood, fusing that modern design with doses of industrial style.

“This is leaning a little bit more towards the Mechanicsville location, because it is in Hintonburg, and I love it. It’s an industrial sort of feel with a little bit of modern glam to it.” 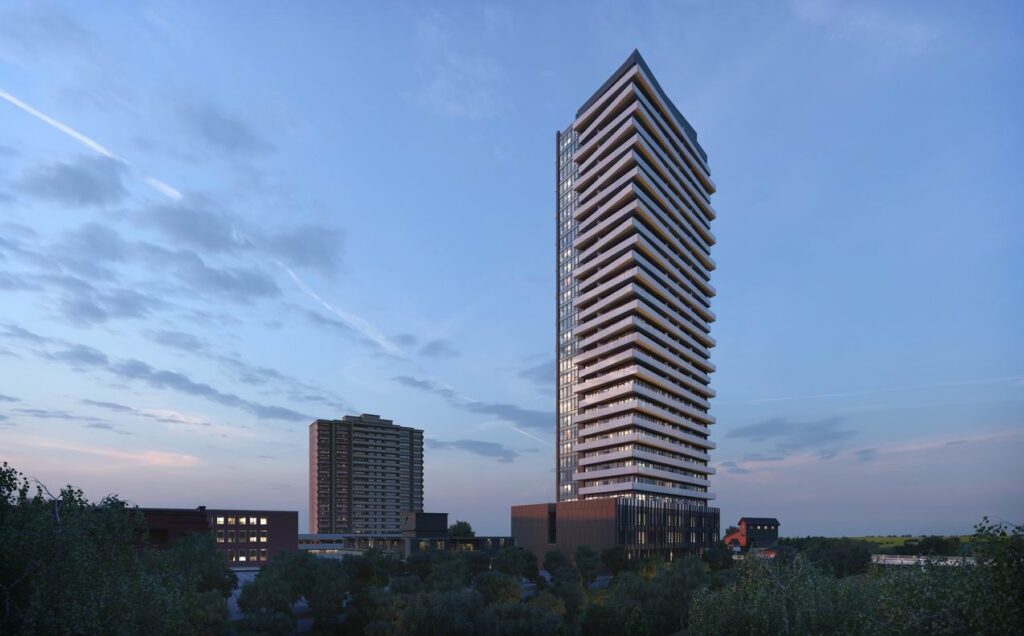 The building takes its cue from the neighbourhood.

The building is designed by Toronto architecture firm architectsAlliance, best known here as the designer of the controversial Château Laurier addition.

“This is not controversial though,” laughs Malhotra, who praised the team as a “very cool architectural firm that has done some really trendy buildings in Toronto.” It’s the first time Claridge has worked with the firm and Malhotra was thrilled with how the design turned out.

“We think it’s a very, very cool look and it’s very Hintonburg-esque. It’s kind of aggressive, but tastefully aggressive, is how I like to describe it.”

The building combines plenty of glazing with “these massive balconies that kind of shift floor to floor,” he says. While the shifting balconies give the building shape, it was important to include expansive windows to take advantage of “these unbelievable views.”

Malhotra says it’s the views, along with the building’s location, that will be the big appeal of Claridge Hintonburg.

“It’s a really cool, trendy, up-and-coming neighbourhood. I think this is a landmark building for that neighbourhood; there’s not a lot of 30-storey high-rises in that area,” he says. “You’ve got the LRT right there, you have access to Hintonburg, Westboro, Little Italy, restaurants, shops, Parkdale Market — it’s an incredible location.” 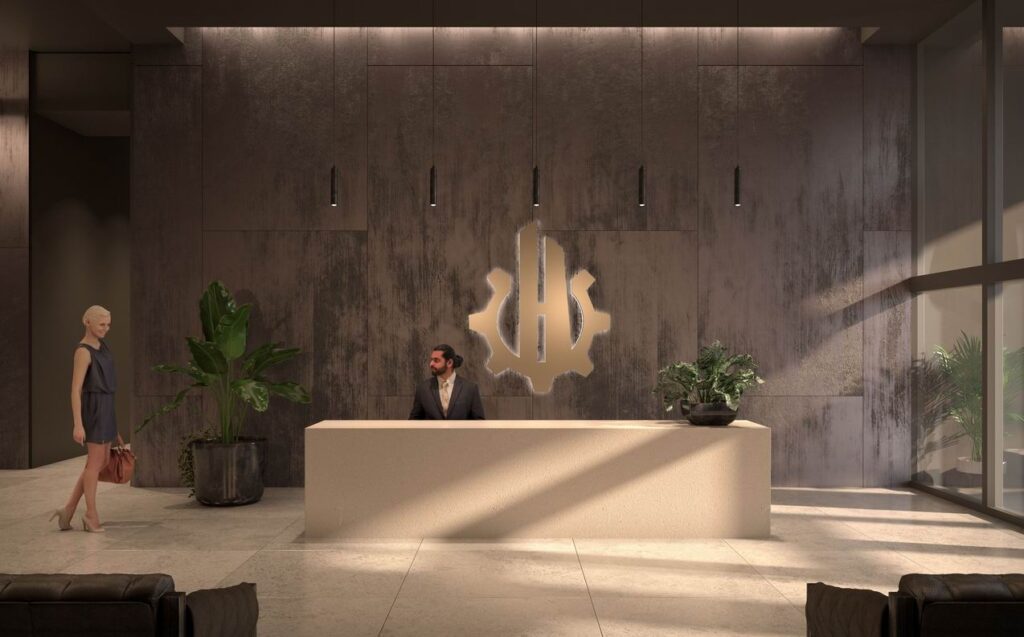 Inside is where the industrial vibe takes over. Malhotra worked closely with Pollock to get the look they wanted.

“It’s a lot of exposed metals, concrete looks, it’s a very industrial interior finish in general, purposely, because we wanted to take on the characteristics or personality of the neighbourhood itself,” he says. 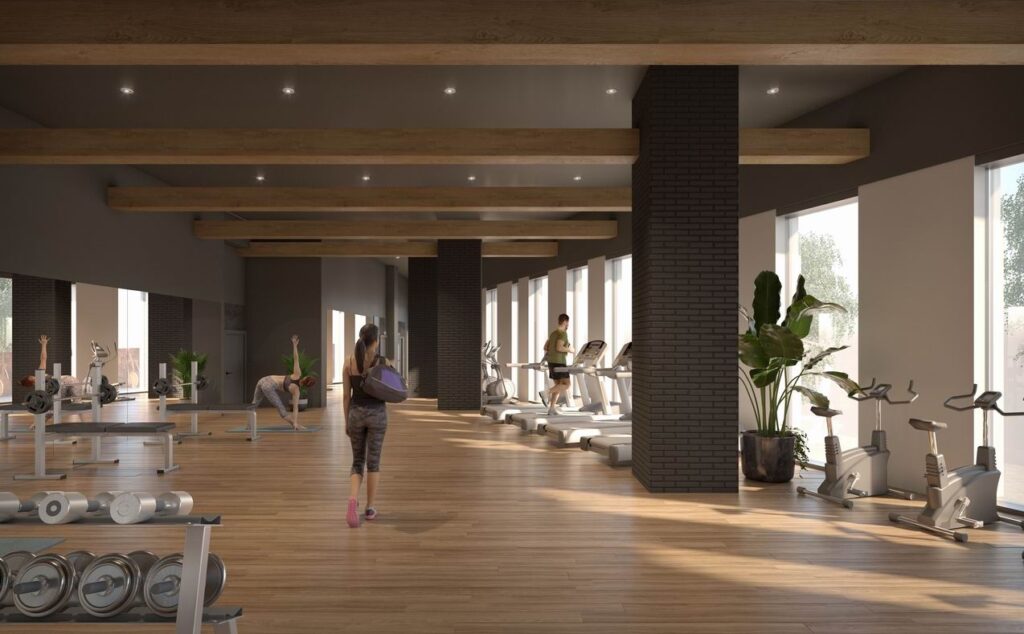 The spacious gym on the ground floor overlooks the O-Train and includes a yoga area, change rooms and saunas.

Her favourite spaces are the gym — “it’s floor-to-ceiling windows and it’s actually overlooking the O-Train track” — and the lobby, which features a 16-foot ceiling with unusual treatments made to look like the ceiling is floating and to subtly guide visitors to the elevators.

“I’m very excited about this reception space,” she says.

Other amenities include a multimedia room with karaoke, gaming “and the best movie-watching experience,” says Dicerni, plus two entertaining rooms, study pods, a large terrace with fire pits and barbecues, a dog washing station and 24-hour concierge and security. 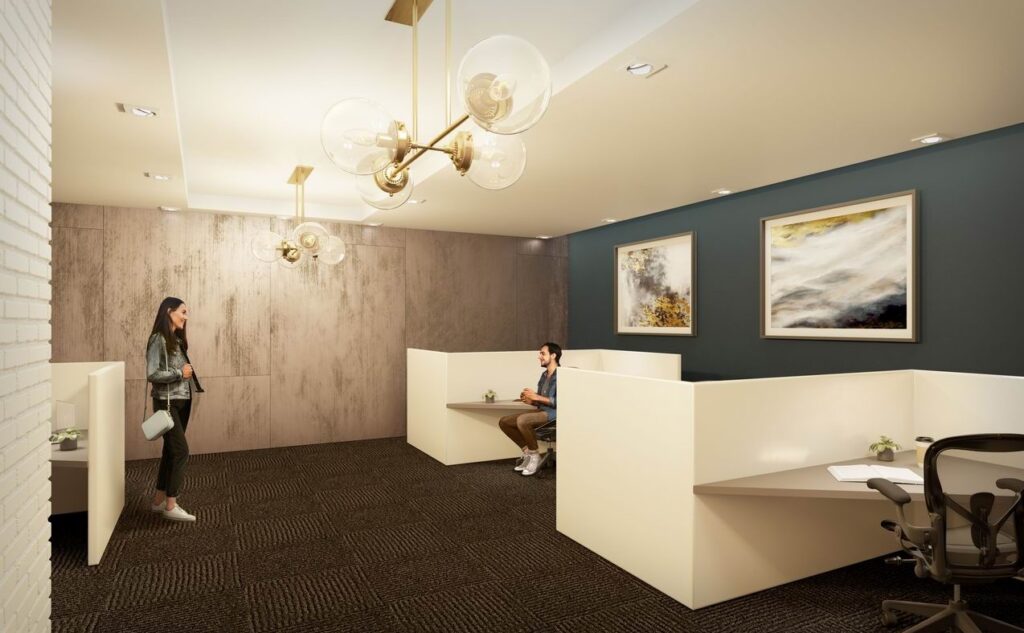 Study pods (similar to airport lounge study areas) were added in response to the pandemic.

Units, which started at $404,000 for the launch, range from studios to two bedrooms plus den and two bathrooms, with square footage ranging from 495 to 1,260 square feet. Many units have either dens or designated desk areas — in response to shifting buyer preferences thanks to the pandemic — and five floor plans (amounting to more than 50 units) are barrier-free.

Dicerni says that so far, four barrier-free units have been reserved.

Units are generally open concept and all have in-unit washer and dryer. All units except those in the podium on the second and third floors have either a terrace or balcony, with some easily half the size again of the interior square footage. 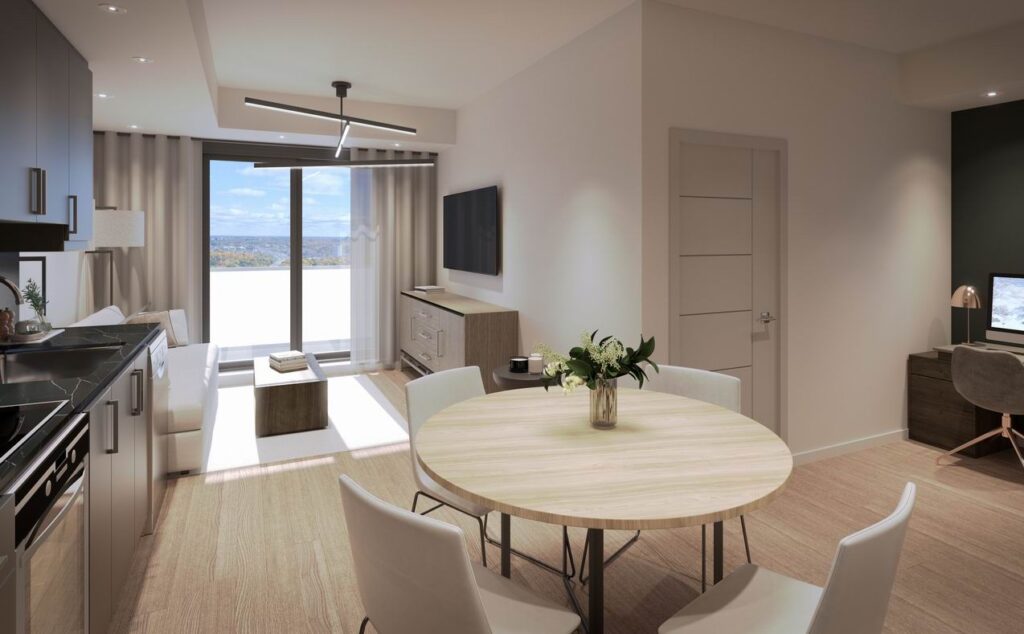 Units range from studios to two bedrooms plus den. 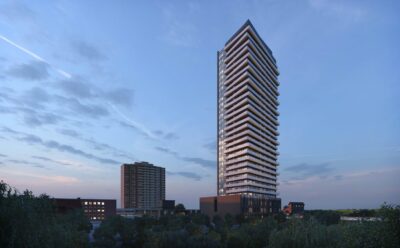