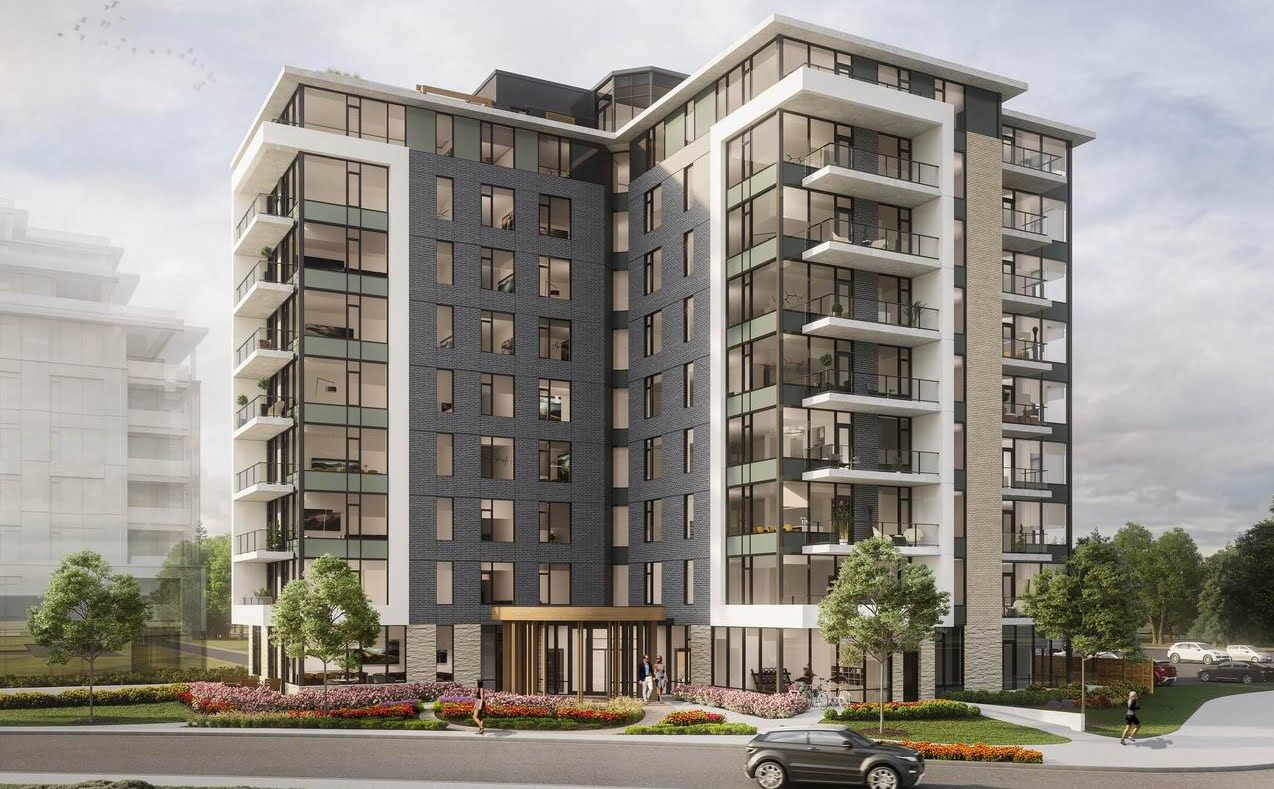 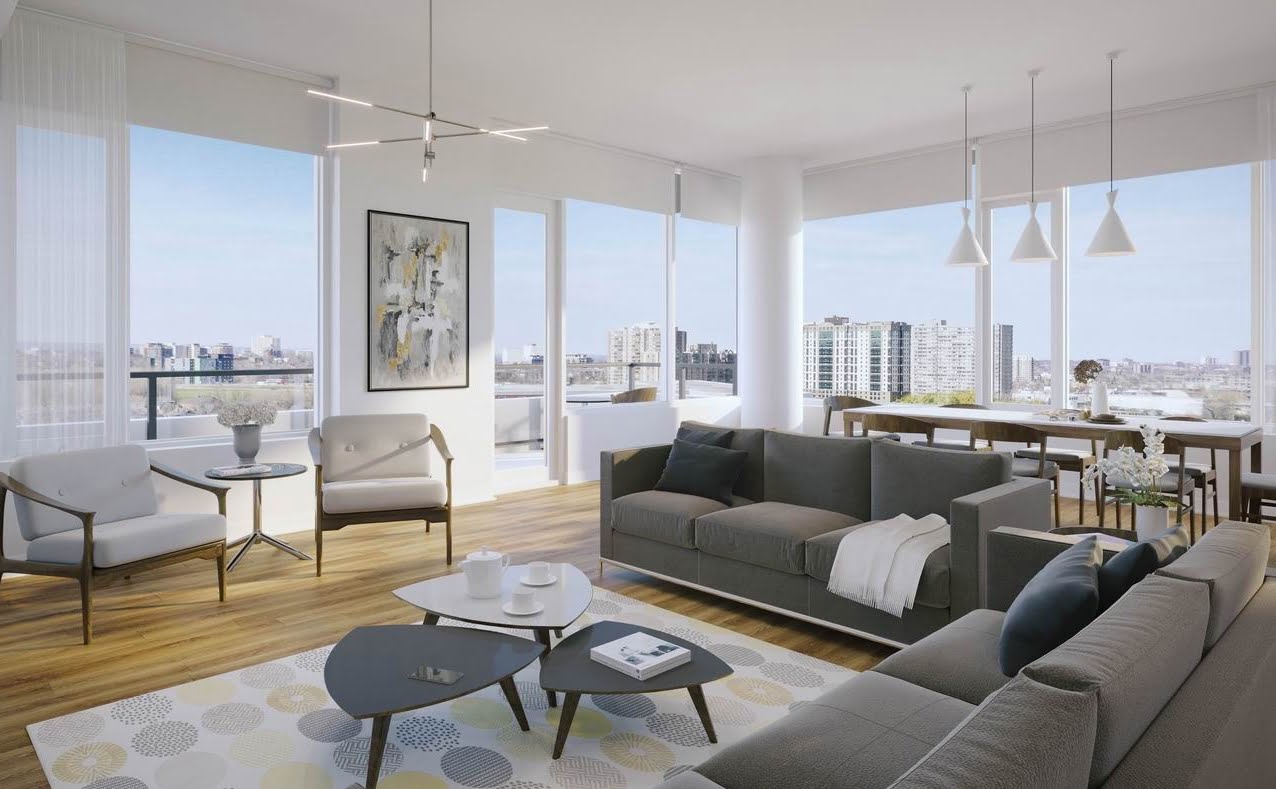 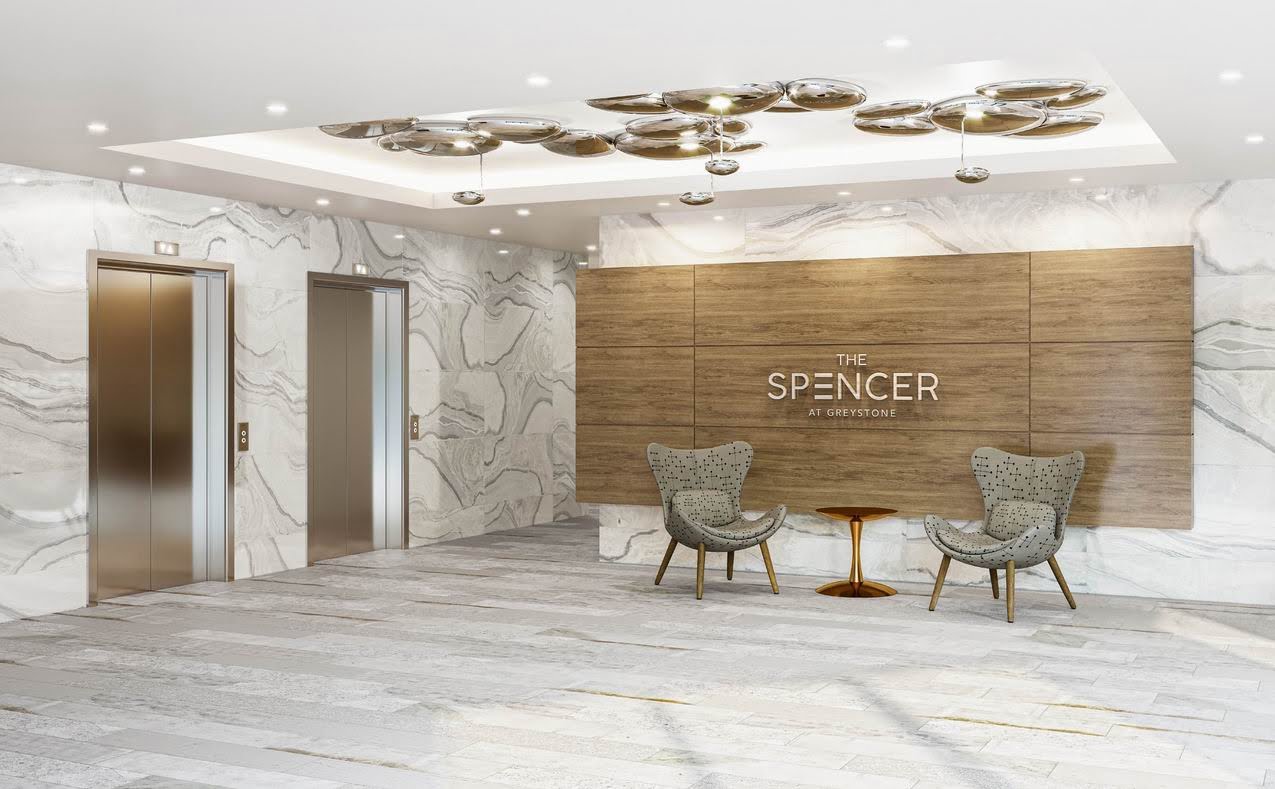 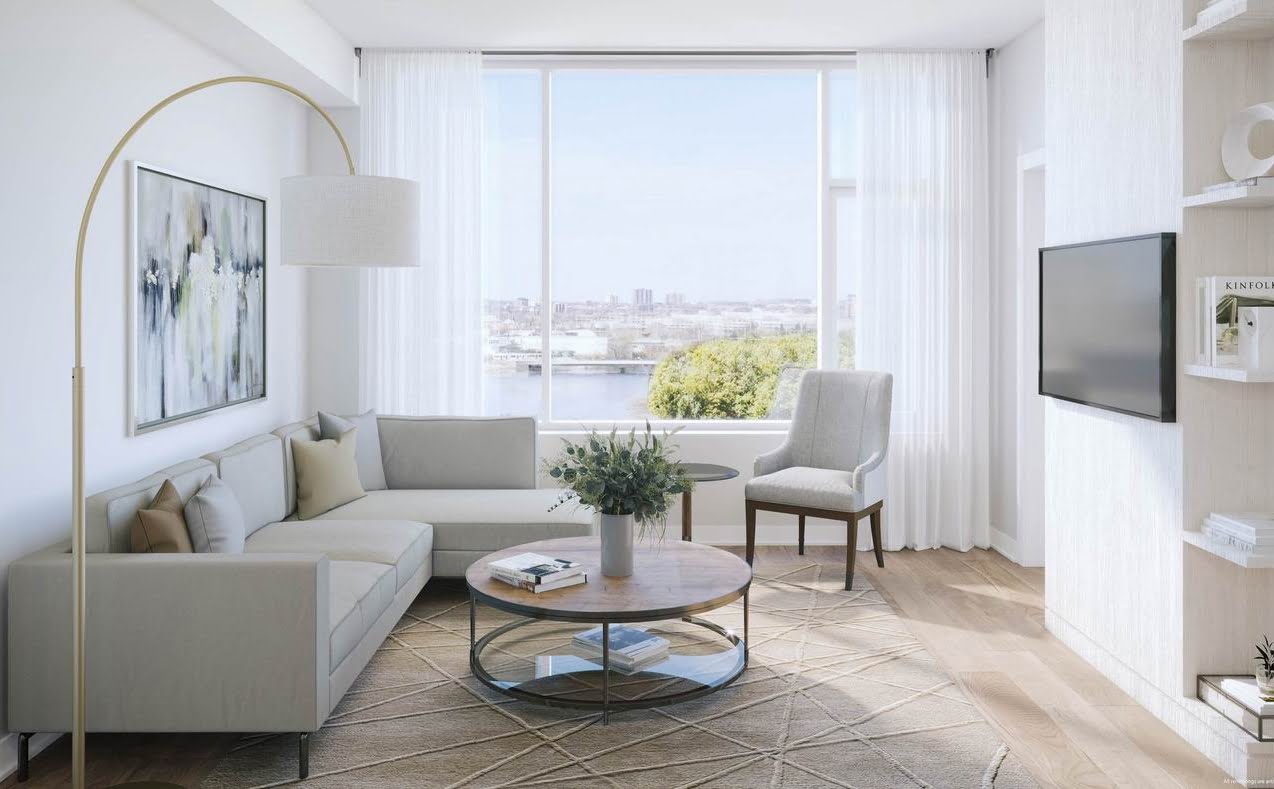 The Spencer is the third condo tower to be built at Greystone Village. The nine-storey building has 85 units.
The largest penthouse suite offers an open-concept living room, dining room and kitchen wrapped in windows on two sides.
The lobby of The Spencer features a sculptural ceiling light ‘to create a bit of a wow factor,’ says interior designer Richard Newbury of Creative Friction.
Units are designed to optimize the views, says eQ’s marketing and product manager, Tobin Kardish.

Following the success of its award-winning River Terraces and River Terraces II buildings, and after taking time to start construction on two rental buildings in the urban village, The Spencer arrives at a time when many builders in the city are releasing only a handful of lots at a time and while there is still a “huge demand for homes in Greystone Village,” says marketing and product manager Tobin Kardish.

“We have a large waiting list of prospective homeowners who are anxiously awaiting this release.”

All 85 units in the nine-storey building were released as of Oct. 17, but the launch is being done virtually, which means interested buyers need to register for an appointment. Units range from bachelors starting at 316 square feet to penthouse suites with up to 1,472 square feet, two bedrooms, two bathrooms and a den. Prices range from the high $200,000s to about $1.3 million. 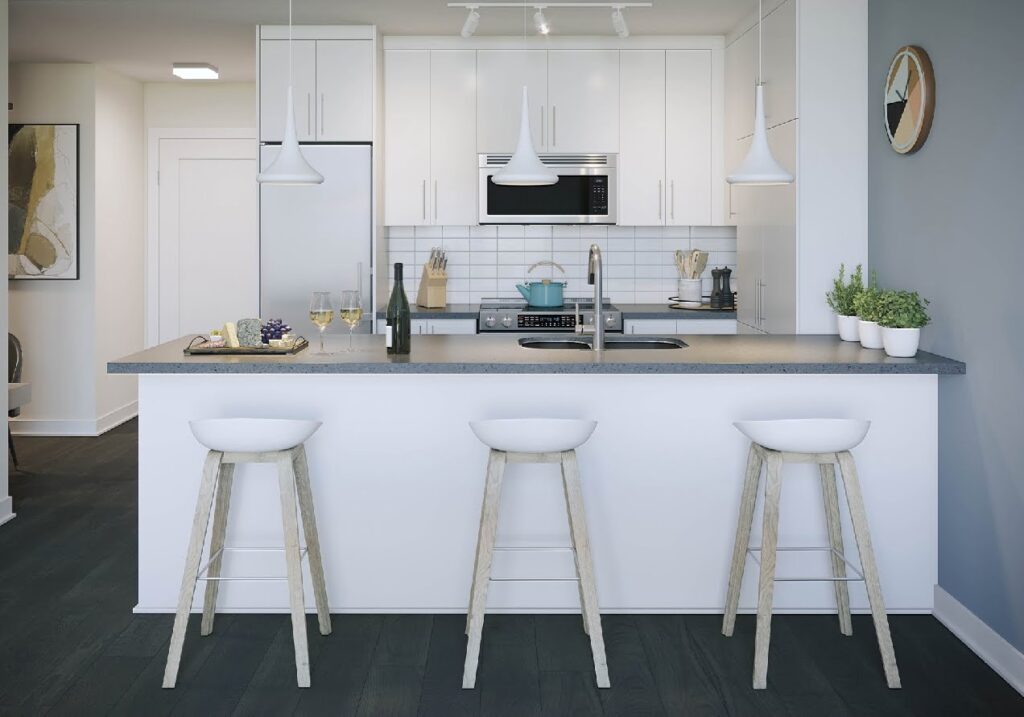 Kitchens are designed with ample storage, pantries and plenty of counter space in mind. They also feature Blomberg appliances.

The building — like all others at Greystone Village — is designed by Hobin Architecture.

“Every suite has been thoughtfully laid out to maximize space,” says Kardish.

Architect Marc Thivierge says the design takes its cues “from the landscape, existing heritage of the site and new urban fabric at Greystone Village.”

The development, which is LEED-certified (Leadership in Energy and Environmental Design) and which has twice won local awards as a planned community, is located on 26 acres between Main Street and the Rideau River surrounding the historic Deschâtelets building, former home to the Oblate Brothers. 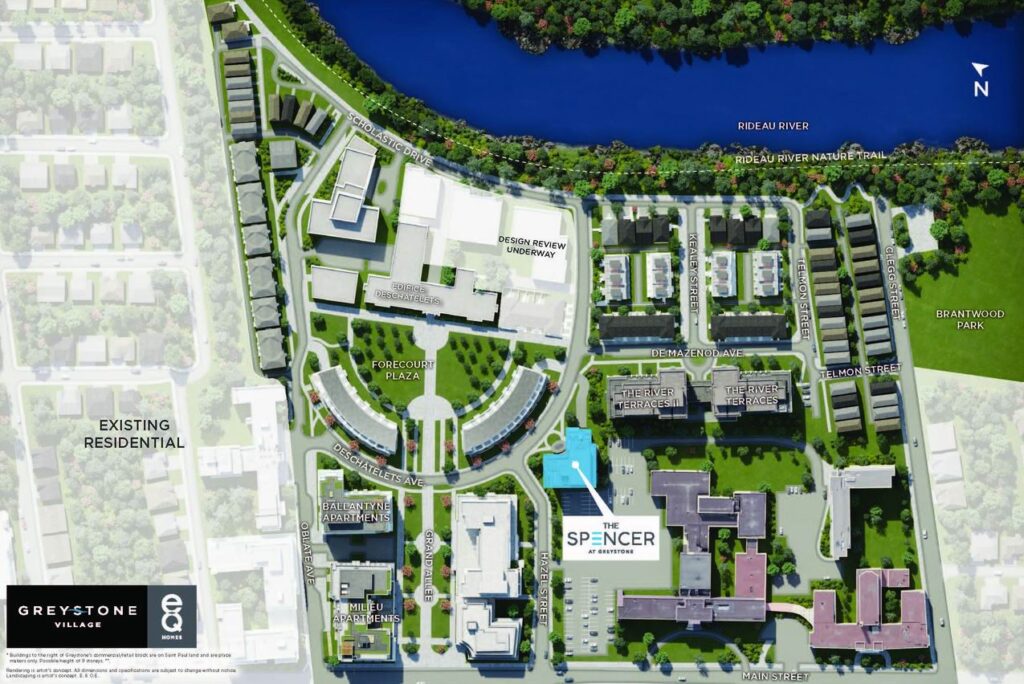 The Spencer is located across from the circular retail and park area that frames the Deschâtelets building.

Years of planning and consultation between the city, the developer (Regional Group, parent company of eQ Homes) and the community resulted in a unique development of more than 900 singles, townhomes, condos and rental apartments, paired with dedicated retail, commercial and communal space centred around the Deschâtelets building.

The building has been conditionally sold to the French Catholic School Board (Conseil des écoles catholiques du Centre-Est), which plans to relocate its Main Street elementary school to the site, says Kelly Rhodenizer, who is director of commercial and multi-family development at the Regional Group. A community centre is planned for part of the ground floor, while efforts continue to bring affordable housing for seniors to the fourth and fifth floors.

Currently, about 240 homes have been built on the Greystone site and construction is underway on two rental buildings along the Grand Allée, the pedestrian-friendly thoroughfare that draws you into the community from Main Street.

Greystone is “a sense of place,” says interior designer Richard Newbury of Creative Friction, who has worked on the amenity spaces of both Terraces buildings and The Spencer. “The site is fantastic along the river. I just think it speaks nicely to the place. 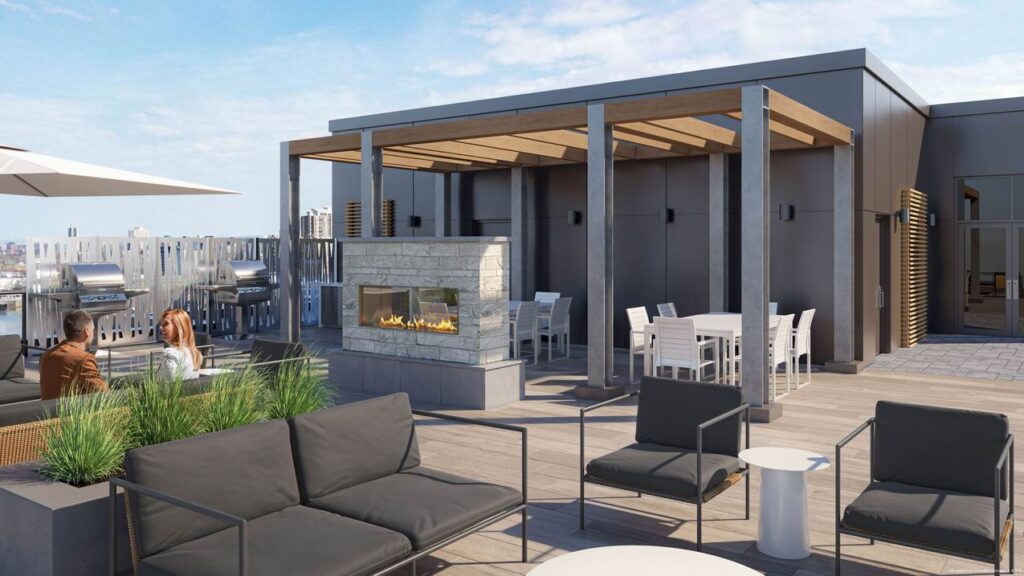 A rooftop terrace offers views of the Rideau River and features dining areas, outdoor fireplaces and plenty of seating. There will also be a limited number of garden plots.

“There’s a quality and a level that they have throughout the whole Greystone Village,” he adds. There’s “a real attention to detail, contrast of materials, stones, glass, metals as an exterior element and all of those things are things that we borrowed and brought into the interiors.”

Newbury is particularly fond of the sculptural lighting his firm chose for the lobby, but he’s quick to point out that the rooftop terrace and the layout of the units themselves are big selling points at The Spencer.

“The layouts are very strong and sensible and logical.”

Thivierge says the form of the building “evolved from a somewhat strategic placement on the site. Consideration for views, engagement with the street, surrounding community and the Rideau River all play an important part with its evolution.” 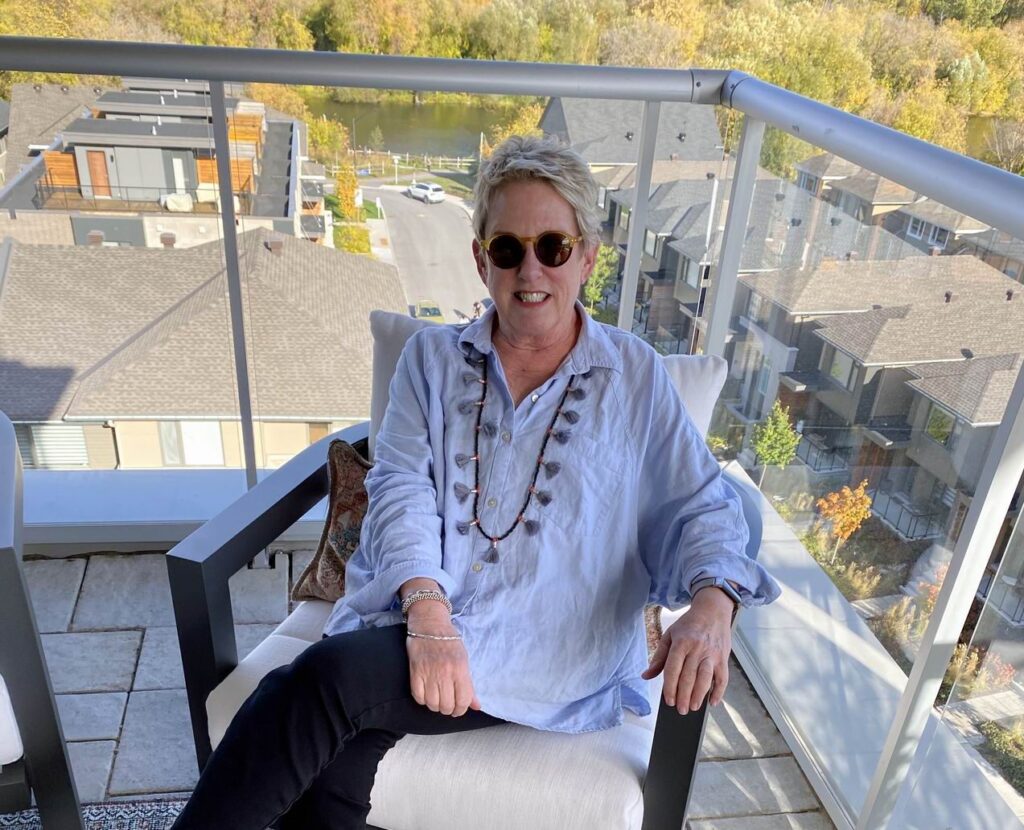 Long-time Old Ottawa East resident Judy Charles loved that she could downsize and stay in her neighbourhood. She chose a two-bedroom unit in the first Terraces building that overlooks the Rideau River and Brantwood Park. Photo courtesy Judy Charles

Judy Charles moved into Greystone Village in July and loves it. A long-time Old Ottawa East resident who was downsizing from her family home, Charles chose a two-bedroom-plus-den unit at River Terraces I.

“I wanted something that was big enough to feel comfortable but not so large that I was rambling around in it,” she says.

“I chose Greystone primarily for its location. The fact that I was remaining in my neighbourhood was important to me since I had lived in it for such a long time. I loved the idea of having the views, which have proven to be amazing. It had a community feel, and that’s what I was looking for.”

River Terraces I has since sold out and River Terraces II is 85 per cent sold, says Kardish. Initial occupancy for The Spencer is expected for spring 2023. 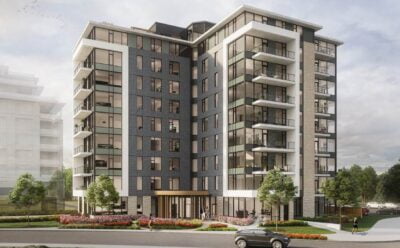