ADVERTISEMENT
»New Homes»Articles»Habitat for Humanity homeowners get their keys

Habitat for Humanity homeowners get their keys 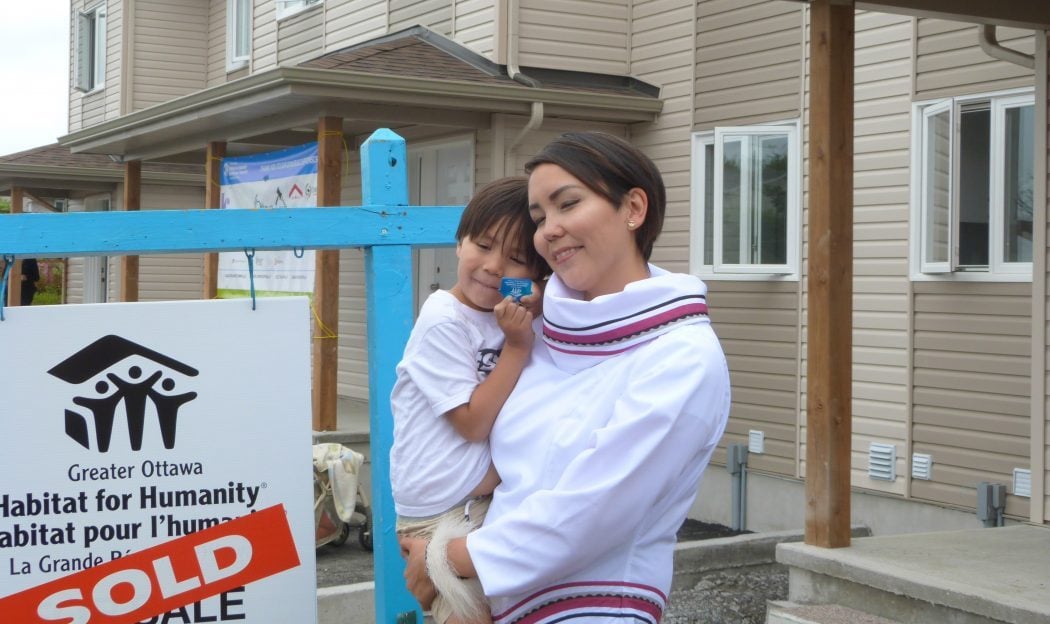 Annie and her son Hunter recently received the key to their new Habitat GO home.

When Annie learned in 2017 that she’d been chosen as a one of the new Habitat for Humanity homeowners in Orléans, her young son Hunter grew worried.

“We were on our way to the daycare when I got the email, and I cried all the way there,” said Annie at a recent ceremony in which she and four-year-old Hunter received the key to their new home. “He was concerned because he’d never seen me cry before. But I told him they were tears of joy.”

There were more than a few such tears at the recent ceremony, where four delighted families got the keys to their homes at Leacross Landing. The families are the first of 16 to move into new townhomes being built by Greater Ottawa Habitat for Humanity (Habitat GO). Not only is this Habitat’s largest project to date in Ottawa, but the key ceremony was also the first time that event had been paired with a groundbreaking for the next phase of the build, which will be completed later this year.

For new Habitat for Humanity homeowners, it’s all about family

Habitat families, who otherwise wouldn’t be able to afford a home, work hard for their keys. Like any homeowner, they take on a mortgage – although they don’t pay any interest – but they also contribute 500 hours of “sweat equity” on the build or at other Habitat locations.

It was clear during their acceptance speeches at the key ceremony that the hard work is done for their families. “It’s very important for my kids to grow up in a safe and quiet environment,” said new Habitat for Humanity homeowner Abdellatif, a registered practical nurse who was there with his young family, when he accepted his key. 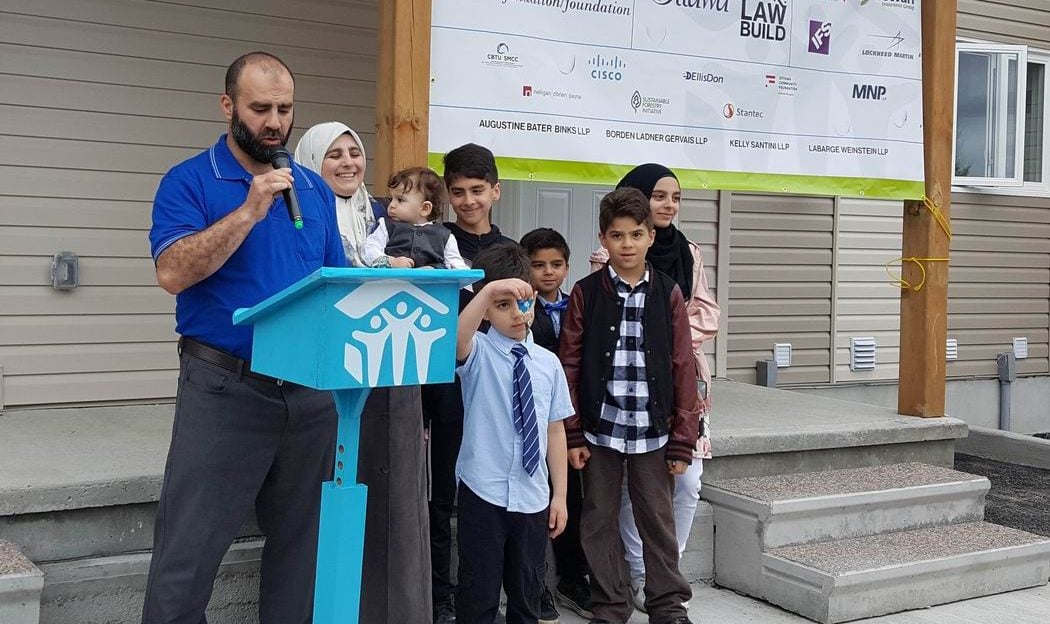 Hadi, Hanaa and their family with the key to their new home.

Added Hadi, another new Habitat for Humanity homeowner and an employee at the Royal Canadian Mint who was accompanied by his wife Hanaa and their flock of six children, “I always wanted to make a good life for my family … my big family, so big you can’t count.”

Like many other Habitat families, Hadi’s clan has been living in less than desirable conditions: a cramped, one-bathroom rental unit in a neighbourhood plagued by drugs and gangs.

Seeing families like Hadi’s get a shot at a better life is what originally inspired Alexis Ashworth, chief executive officer of Habitat GO, to join the organization in Halifax.

In an interview, Ashworth said, “The thing that hooked me on Habitat in 2004 was a key ceremony with a single mom with two boys. Her hand quivered when she reached for the key, and you could see life was going to change for them.”

Welcome to the neighbourhood

Dierdre Abernethy was among the 100 or so folks attending the recent handover of keys to each new Habitat for Humanity homeowner. A nearby resident, she has no connection with Habitat and was standing quietly at the back of the crowd near a fence separating the new homes from piles of lumber, gravel and other materials destined for the build’s next phase.

At one point she turned to Hadi and said, “Welcome to the neighbourhood.”

His eyes lit up.

Asked why she’d taken the trouble to attend the ceremony and speak to Hadi, Abernathy said, “It’s a scary thing being in a new place where you don’t know anyone or whether your new neighbours will accept you.

“I think it’s a wonderful thing that they can afford to live in these homes.” 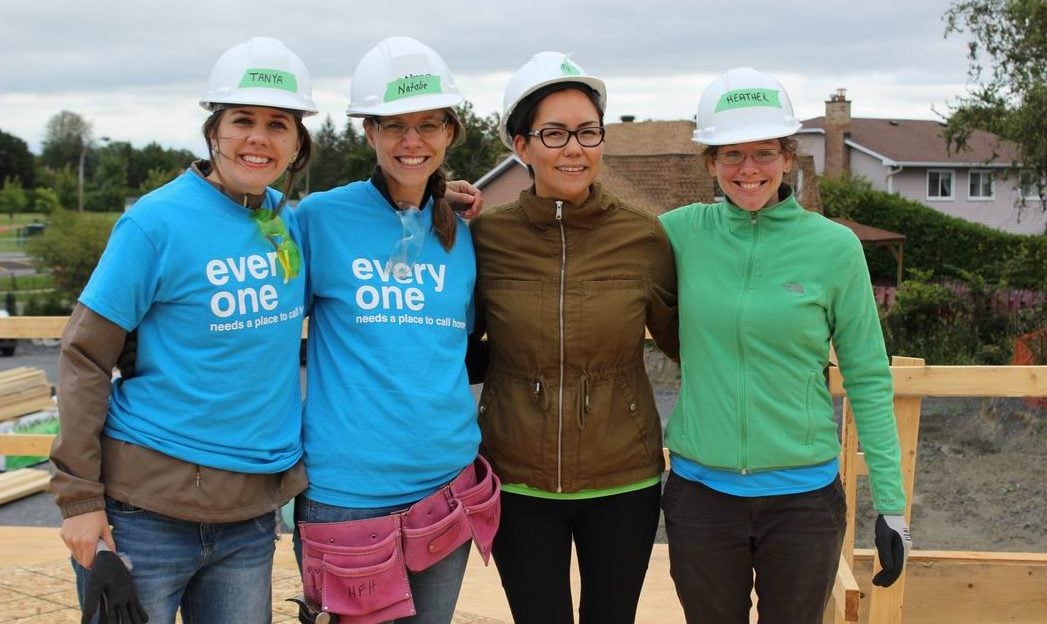 Annie, third from left, on site with the MNP building team.

The townhomes, whose staggered front elevations create a sense of individuality while cedar posts on the porches lend warmth, also foster their own sense of community, according to Ashworth. While multi-unit projects are necessary for Habitat because of escalating land costs, they “build a strong sense of community. I know these families have already been in touch with each other.”

Focused on the future

Sponsors for the new Habitat build include the locally based Leacross Foundation, which supports the education of women and children. President Roslyn Bern, who was on hand for the recent ceremony, said in an interview that the foundation was behind the build because “if children don’t have a place to sleep, they won’t be focused. It’s for the future, for the kids: If they have a place to come home to, they can focus on their education.” 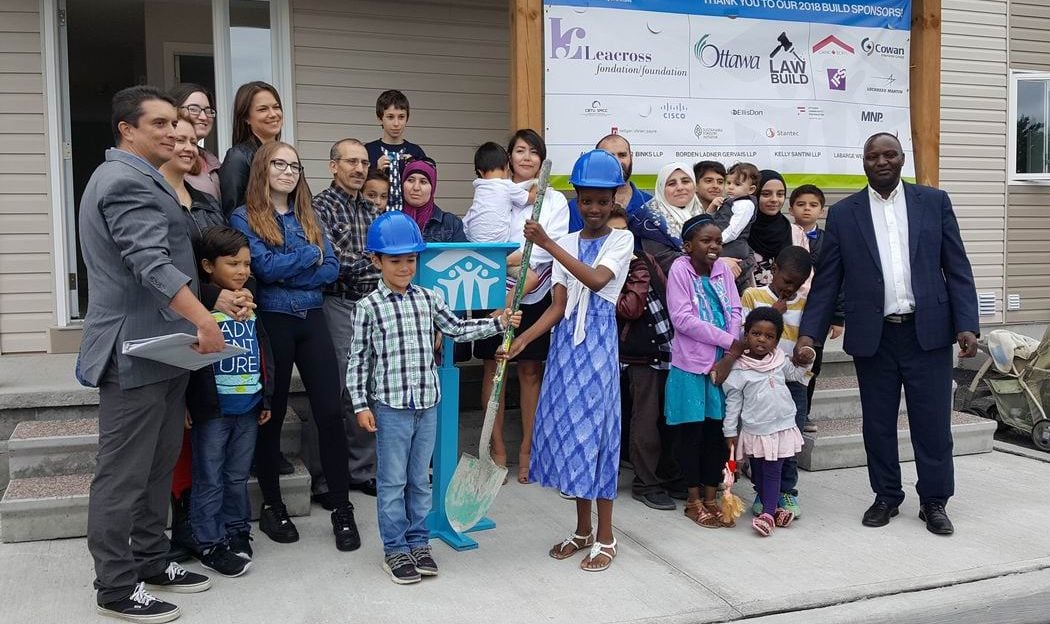 The key ceremony was also the groundbreaking for phase 2. The four families who just got their keys pose with 2 of the families whose homes are now under construction, with new homeowner Chayse handing the shovel over to future homeowner Marie-Ange.

Chayse was also focused on the future, but one a little closer to hand. The 7-year-old, along with his mother and two older sisters, will soon be moving into one of the Leacross Landing homes and he proudly brandished the key to his new home as the ceremony wound down.

Asked what he had planned for his new bedroom, Chayse replied, “It’ll be the same as before but with less stuff because we’re donating some.”

Like Chayse, Hadi and his family are also focused on the future.

“Habitat came through for my family,” he said. “After many years of dreaming, we have a home and our dream.”

A day on the job with Habitat