The Charlotte condo launches along the edge of Sandy Hill 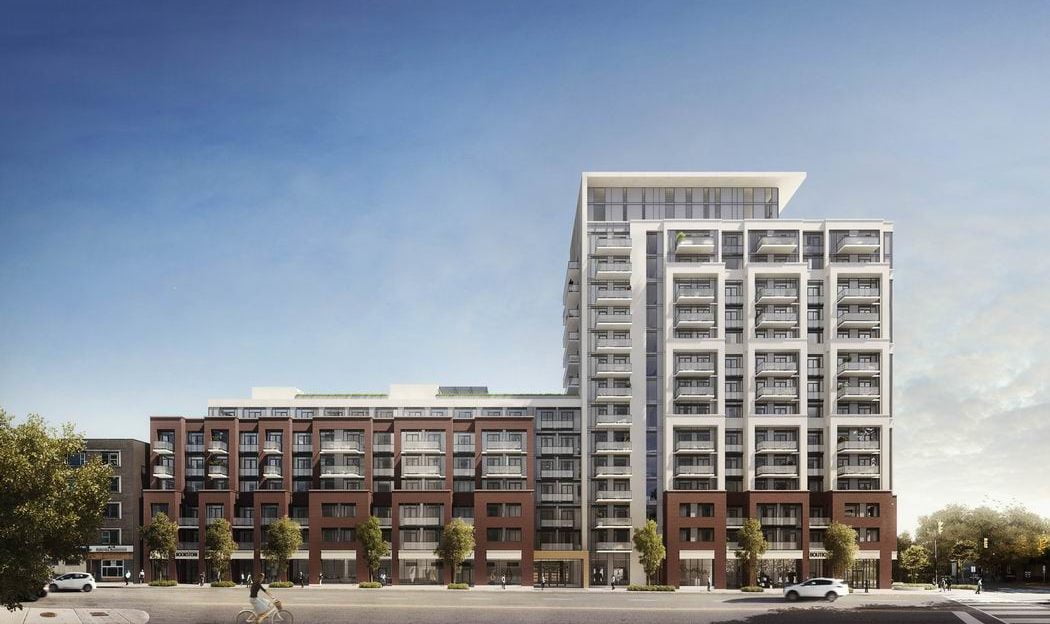 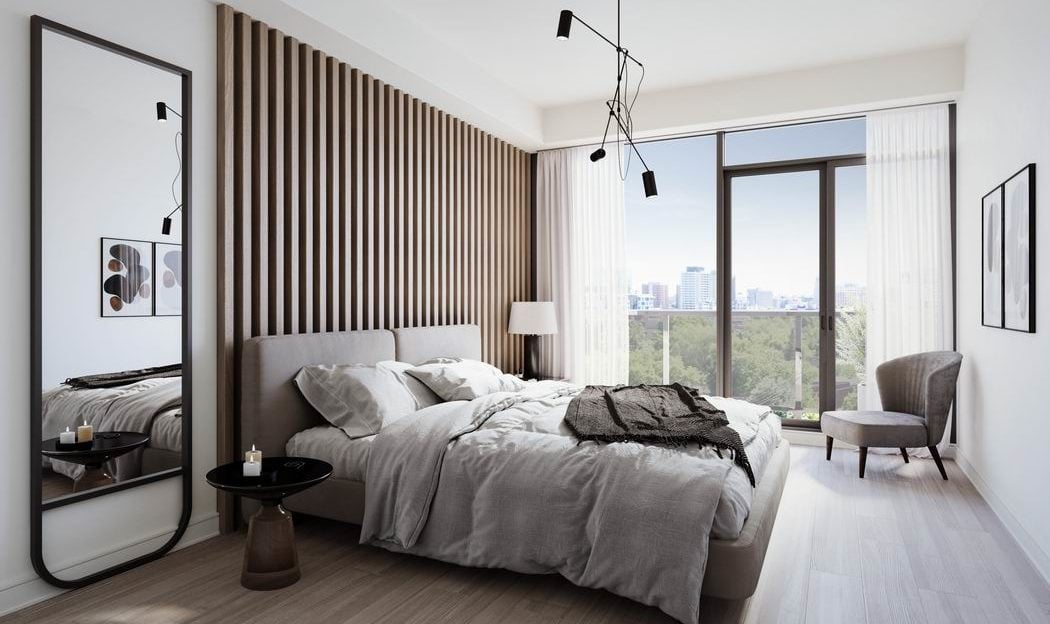 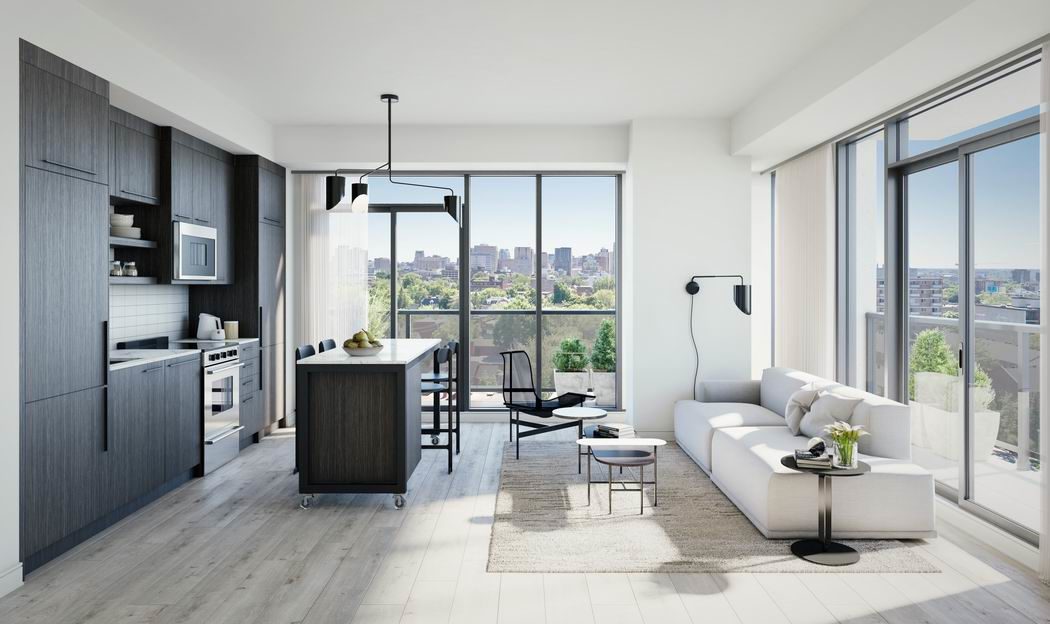 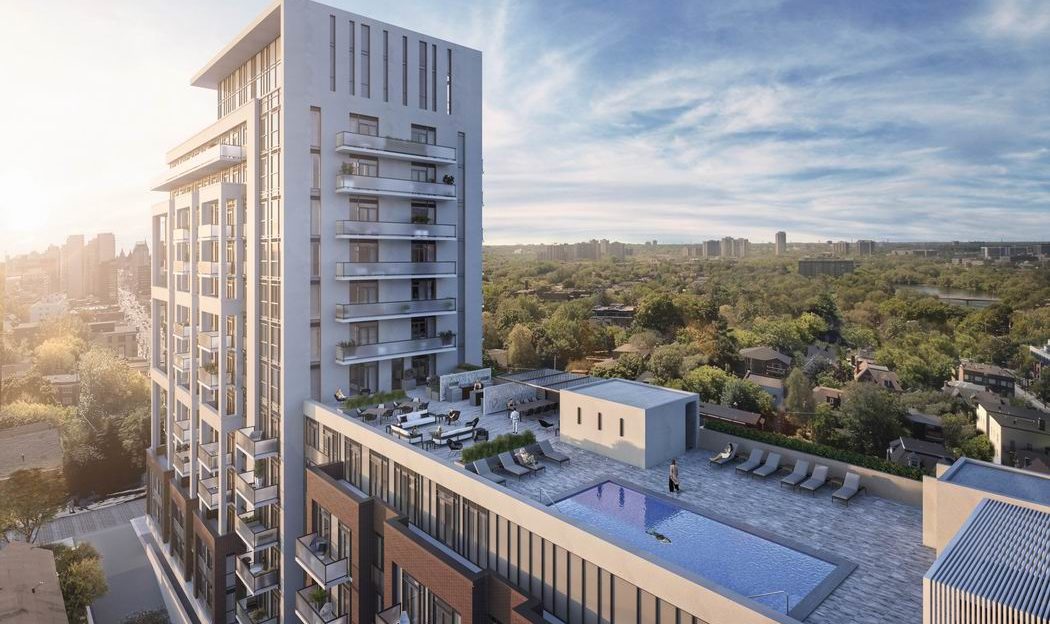 The Charlotte is a 197-unit condo building with seven-storey podium and 14-storey tower.
Units range from studios to two bedrooms plus den or flex space.
Interiors are contemporary with timeless, neutral palettes, floor-to-ceiling windows for lots of natural light and many come with movable islands.
An outdoor amenity space atop the seven-storey podium includes a heated pool.

In an eclectic neighbourhood of downtown Ottawa, an equally eclectic building — The Charlotte condo — is set to rise, stretching along a city block of Rideau Street and bringing an unusual mix of units aimed at attracting a diverse range of buyers.

The Charlotte is a name that evokes the old-world charm of Sandy Hill but with a decidedly modern twist. Set along the edge of the neighbourhood, its architecture borrows from nearby homes, with red brick cladding in a nod to the long-standing residences that flank its rear.

But there’s also a healthy mix of glass and precast concrete, creating angular patterns and giving the building a more contemporary look. And its stepped outline keeps it from being a monolith along Rideau.

It is, in effect, two buildings — a 14-storey “tower” at the corner of Cobourg Street, and a seven-storey podium beside it just west of Charlotte Street that’s topped with a plethora of amenities, including an outdoor pool.

“There’s been a great response on the look of the building and the L shape of the building… This has some pizzazz to it,” notes Jim Fillman, a sales assistant for the condo’s builder, Richcraft Homes. “It seems to blend in with Sandy Hill.” 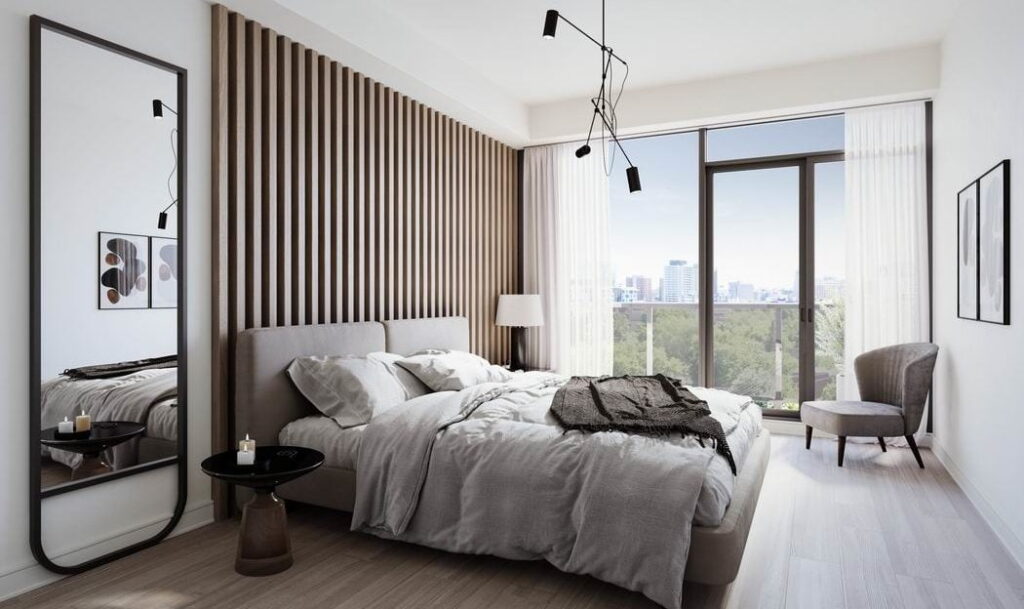 Units range from studios to two bedrooms plus den or flex space.

There are 197 units, ranging from studios at a compact 375 square feet to two bedrooms plus den with 978 square feet. That range is meant to make them affordable to a variety of buyers, says marketing manager Shawn Bellman.

Adds sales representative Cathy Russo: “This has become the new affordability for people. From a young professional perspective, it’s all about lifestyle… close to work, the transit, it’s the lifestyle, maintenance-free living.”

“We approached this more as a boutique style,” says designer Kelly Cray, a principal at the Toronto firm U31, which designed the interiors. “It’s almost like when you walk in the lobby it kind of feels like a hotel.” 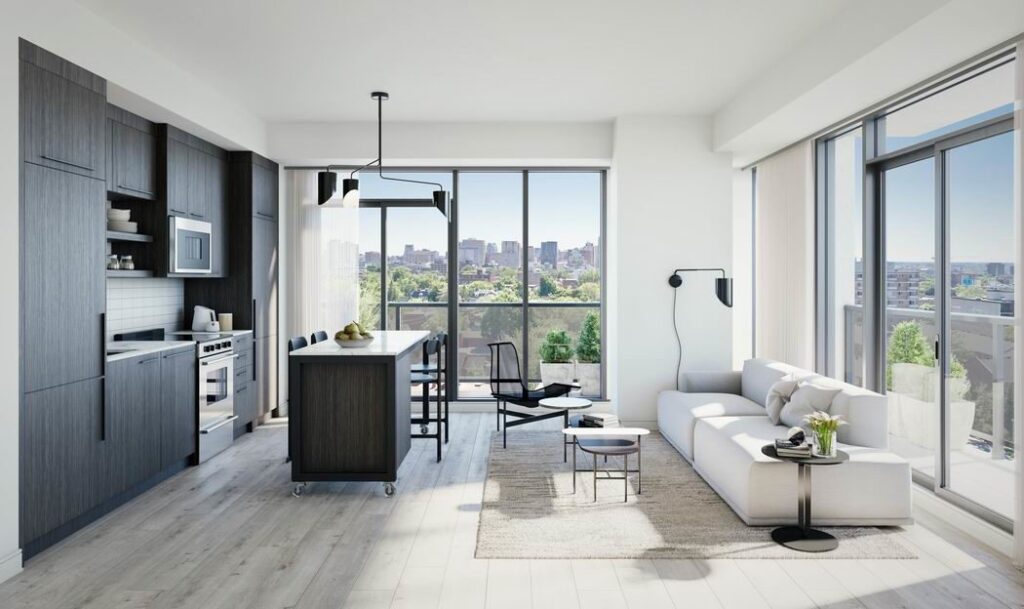 Interiors are contemporary with timeless, neutral palettes, floor-to-ceiling windows for lots of natural light and many come with movable islands.

Virtually every unit has a balcony or terrace, all come with stackable washer and dryer, either integrated in the kitchen or in a separate laundry closet, and several units include a stylish, sturdy and very handy rolling kitchen island. Topped in quartz, the island maximizes counter space yet can be moved out of the way when needed to make more room for guests.

“We’ve done this in a few projects,” says Cray. “Movable islands are always great for small spaces because obviously it’s flexible, it can be shifted out of the way… We find in a lot of these suites now conventional dining spaces aren’t really a thing anymore.”

Adding to the high-end vibe is a whole slate of amenities, both inside and out. On the ground floor, a 24-hour concierge will be on duty, a generous parcel room has been included — a reflection of our increasing desire to shop online — there’s a pet washing station, bike maintenance room, moving and holding space and a guest suite. There is also ground-floor retail space all along Rideau Street.

But the real wow factor as far as the amenities go is on the eighth floor, incorporating both the top of the seven-storey podium outdoors, where there will be a heated outdoor pool, cabanas, dining areas, barbecues, a fire pit, loungers and an outdoor shower, and then moving inside, where there is a party room, dining room, kitchen, bar, games room, fitness centre and yoga stretch room. 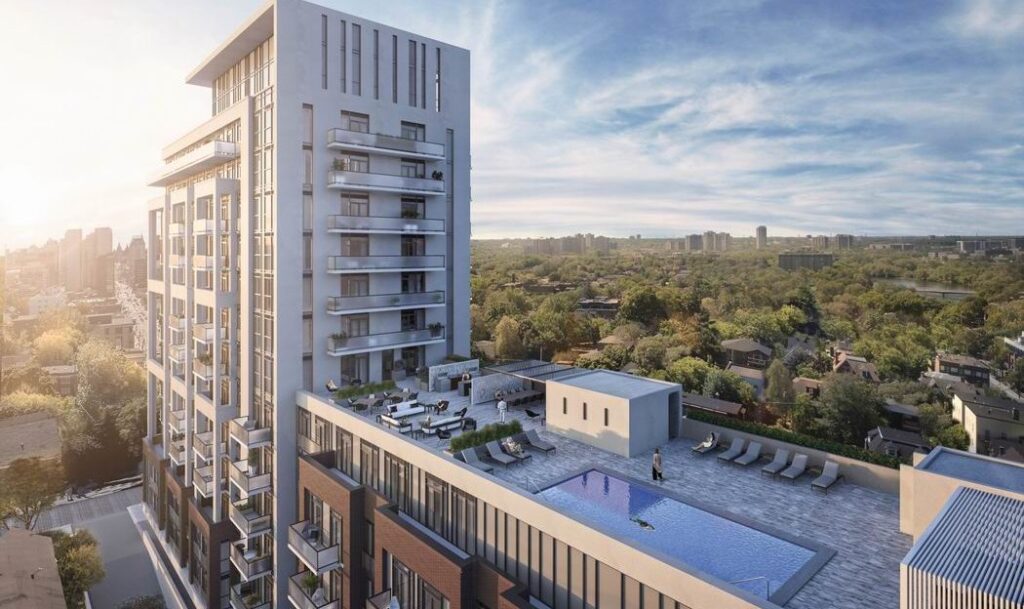 An outdoor amenity space atop the seven-storey podium includes a heated pool.

It all (and especially the pool) “makes the building stand apart from the competition,” says Bellman. Adding these amenities makes it all part of the lifestyle, he adds. “People don’t need to go out and get a gym membership, they have it here.”

There are also vented ski lockers that can be rented. “You’re 15-20 minutes from the ski hills,” he notes.

“The whole area is being revitalized. The city’s put a lot of infrastructure into Rideau Street,” says Bellman, adding that Richcraft deciding to build here is part of that revitalization. “We believe in the area; we’ve invested in the area.”

Launched Nov. 2, there have been just under 30 sales at The Charlotte so far, including to Realtor Omar Hashem, who was already a fan of Richcraft, having bought a one-bedroom at the builder’s previous condo building, The Bowery in Centretown, about two years ago. Living there with his wife and their three-month-old son, he’s contemplating their next move, which might be to the unit they’ve bought at The Charlotte.

In the meantime, he’s bringing other clients to the building.

“I’m probably their No. 1 agent here,” he laughs during a visit to the sales centre with one of his clients. 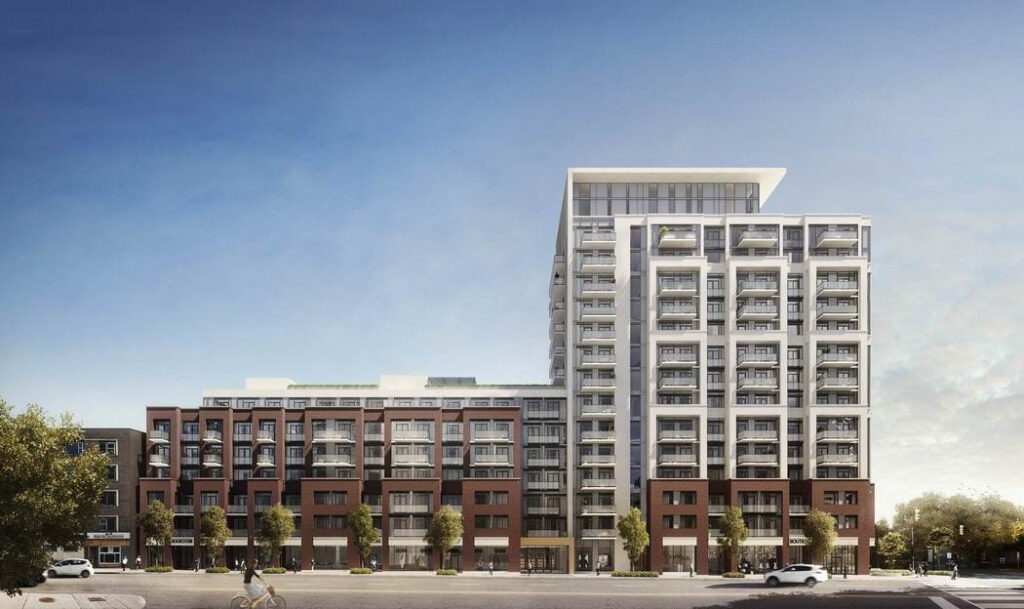 The Charlotte is a 197-unit condo building with seven-storey podium and 14-storey tower.

And as a buyer, he says, “location-wise here it’s fantastic. You get to go out by the (Rideau) River… it’s definitely an up-and-coming neighbourhood.”

The area is an interesting mix of urban, residential and idyllic. This section of Rideau Street is less hectic than busy downtown, yet it has all the amenities of an urban core. It boasts a walk score of 92 and is also called a biker’s paradise.

Head west for a few blocks and you’re at the Rideau Centre and ByWard Market. One block north is the spacious MacDonald Gardens Park. Just behind the building are the leafy streets of Sandy Hill, dotted with embassies, Le Cordon Bleu, and, further south, Strathcona Park and the University of Ottawa. And to the east is the Rideau River and the boutique retail of the up-and-coming Beechwood strip.

“It’s kind of an eclectic mix,” says Bellman, great for those who want to downsize but stay in the area, as well as for young professionals who perhaps lived in the area while going to school and now want to buy nearby. And that’s reflected in the age range of buyers, which stretches from 23 to 72, he says.

Initial occupancy is expected in April 2022.

For up-to-date starting prices and location, check out our development profile on The Charlotte.