Eliminating ice on your roof 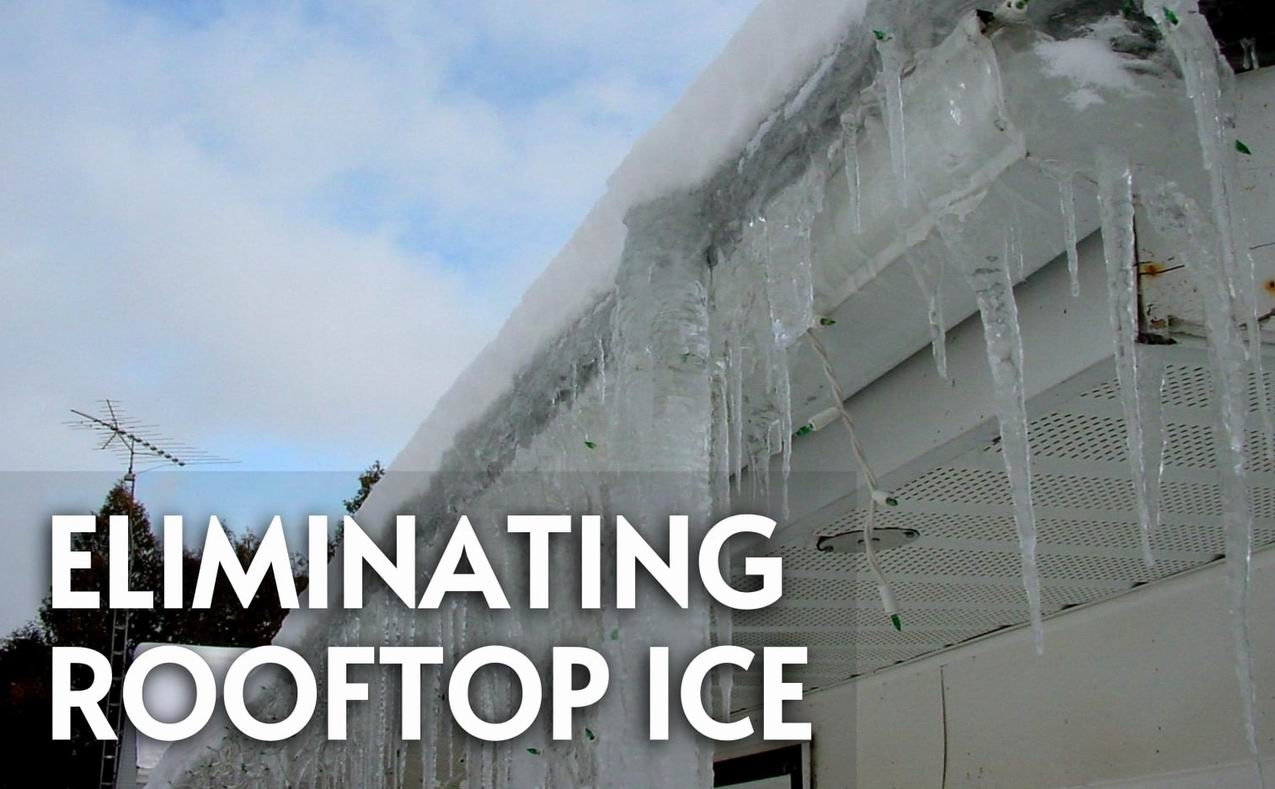 Ice build-up on your roof can lead to damaging leaks.

Ice on your roof is a concern for many Canadians in winter.

A few winters ago, as I was driving down the highway, I passed the house of a man in the throws of a particularly northern form of desperation — he was at the top of a ladder leaning against his house, using a full-sized axe to attack a massive glacier of ice that had formed around the eaves.

He was going at it with both hands, chips flying. Never mind that it was absurdly dangerous up there, that it would take a miracle to shield the shingles from damage or that the job was obviously torture. The ice had to go at any cost, probably because this guy knew what it would cause later if it remained in place as the weather warmed up. 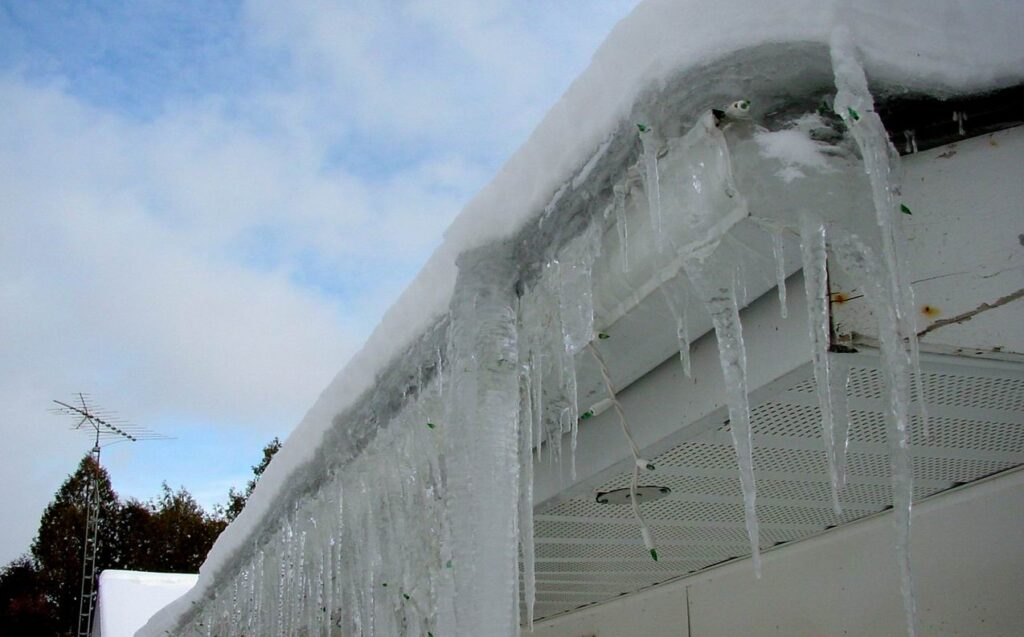 These ice dams and massive icicles were a regular part of the community hall near my home, but upgrades to insulation and attic ventilation have completely solved this problem.

Ice is beautiful, but more than a little on your roof is a bad thing.

Long stretches of cold weather leads to rooftop ice build-up on some homes, and this situation shouldn’t be ignored. Besides the danger of ice falling off and hurting someone, ice on your roof often causes leaks in otherwise sound shingled roofs by preventing the downward flow of water when the weather warms up.

Many roof surfaces have almost no ability to seal out pools of water since they’re only good at keeping things dry when gravity is actively propelling water downwards. And the fact that rooftop ice stops this flow and causes pooling is a big problem because it triggers roof leaks.

Ice on your roof eaves forms for one reason

A roof surface that is too warm is the reason why ice dams build up on the eaves, and roofs that are too warm may be caused by:

Either way, the result is the same — roof leaks.

Excess rooftop heat causes snow to melt on the main part of the roof, even when the surrounding air and eaves overhang are below freezing. As melt water trickles downwards, it eventually comes to the eaves, which are still below freezing because they have no heated space under them.

The melt water freezes and forms a small ridge of ice or icicles. These won’t be noticeable at first, but they’re the seeds of trouble. As the melting-and-freezing process continues, the ice build-up gets larger and larger until it’s high enough to hold back pools of water on days when the temperature rises above freezing.

If the downward flow is stopped like this, water will find an alternate route between your shingles and down through your ceiling. 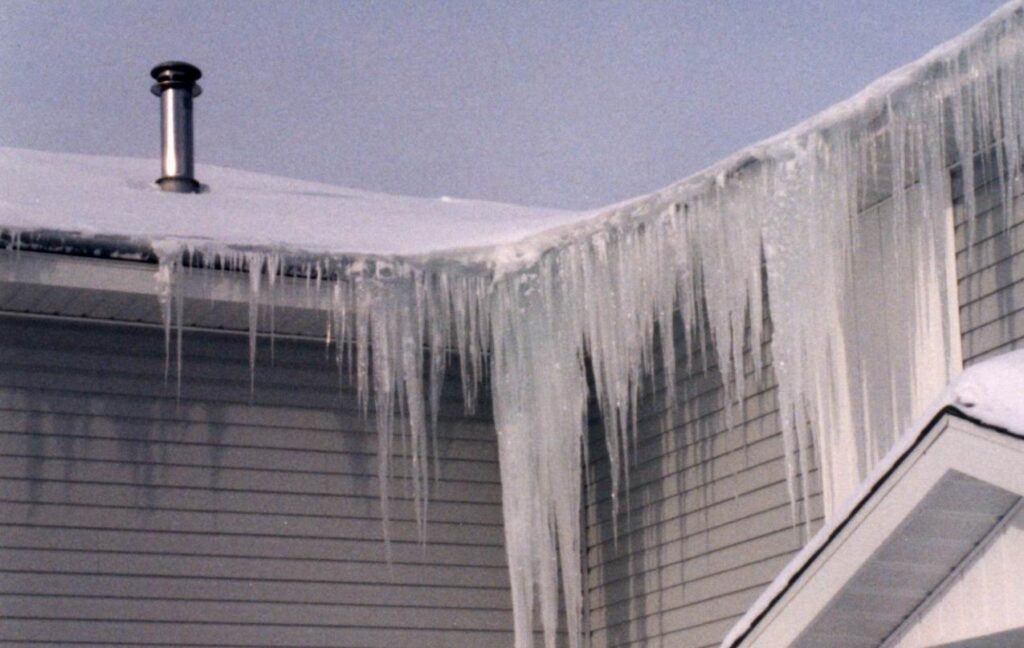 Rooftop ice might look like it’s caused by eavestroughs, but the real cause is excess heat escaping from the roof, melting snow when ambient temperatures are still below freezing. As this water drains down and hits the cold, unheated eaves, it freezes, forming an ice dam.

The worst thing about ice-caused roof leaks? No permanent fix is possible until spring.

Adding more insulation and ventilation will make your roof surface colder and that’s good, but it won’t get rid of existing ice build-up and the leaks that may cause later in the spring. Another problem is that upgrading insulation and ventilation isn’t easy (or even possible) with cathedral ceilings, which are usually associated with the heaviest ice build-up. There’s simply no way to get into the attic space to work.

In these cases, the best you can do is add two to four inches of rigid extruded polystyrene foam insulation to the underside of the ceiling, then drywall over it. Even then, it may be necessary to install an electric rooftop heating system along the eaves if the foam isn’t enough to keep the roof cold. You’ll only know for sure next winter.

Another remedial approach is installation of a seamless rooftop membrane all around the eaves. By running the membrane up several feet higher than the area of ice build-up, any standing water is prevented from trickling down through the shingles.

This fix doesn’t look great when it’s applied over an existing roof, but it’s better than brown water marks on your ceiling. Installation of a roofing membrane called ice-and-water shield under new shingles during the next re-roofing job does the same thing invisibly.

When it’s not possible to add insulation or boost attic ventilation enough to solve rooftop ice build-up, then some form of rooftop heating system is what you need.

The best rooftop de-icing system I’ve seen is made in the Muskoka region by Heat-Line, called Edge-Cutter. It’s effective, invisible and I know from watching it over a number of years that it actually works.

Watch the video below to see for yourself. It’s an electric heating system, but there are no cables to see.