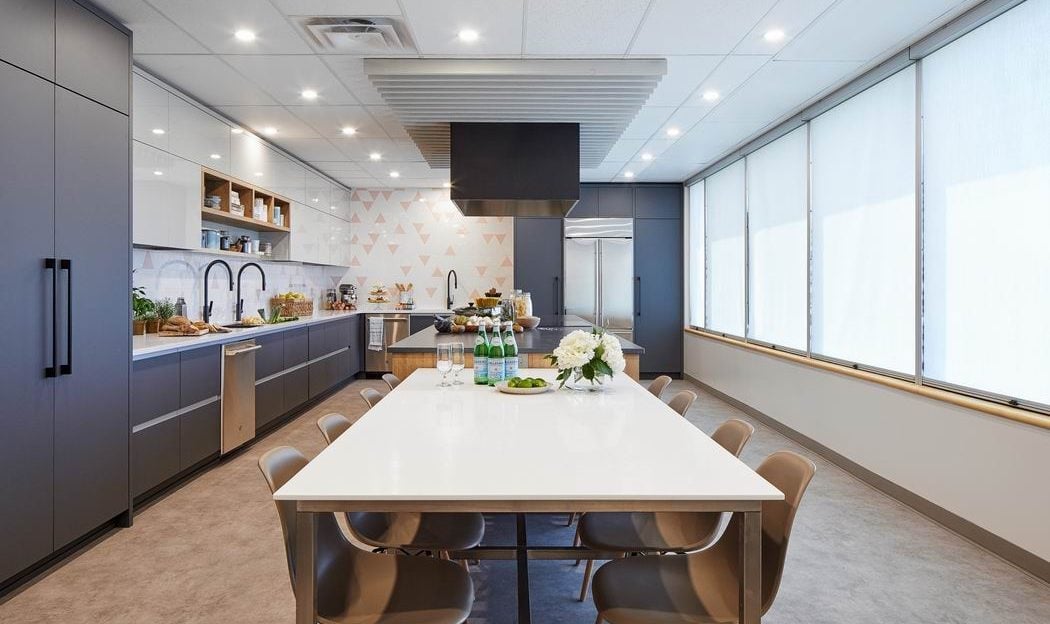 A communal kitchen that plays a major role in the therapy of patients at the Royal Ottawa Mental Health Centre has been given an overhaul thanks to a generous Astro Design Centre donation.

The $200,000 transformation has updated the centralized occupational therapy kitchen at the hospital from a deteriorating room with an institutional feel into a warm, welcoming and modern space that feels like home.

Unveiled to staff and patients May 31, the reaction was enthusiastic. 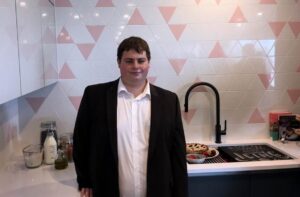 “I love the countertops – they’re so big. When you have 10 or 15 people in a group, you run out of counter space really fast. And I really like all the new storage space,” says Kieran Menard.

A former patient now in his third year of bio-chemistry at Carleton University, Menard was part of a cooking group at The Royal that used the old kitchen. Working in the kitchen “gave me lots of structure, something to focus on,” he says. “I enjoyed being in a group that wasn’t focused on therapy, where I was learning new skills like cooking and social skills. It was a chance to go to a group and just be there without having the emotional draining of therapy.”

So, how did all this come about?

While celebrating Astro’s 20th anniversary last year, company principal Jimmy Georgitsos says they wanted a way to give back to the community that would have an impact on people’s lives right away. They also liked the idea of doing something that tied in with their business.

A childhood friend of his who works at the Royal and uses the occupational therapy kitchen had told him about this kitchen they had to work in “that wasn’t the greatest environment, but it really made a big difference.” From Georgitsos’ perspective, being able to create a functional and beautiful space while helping out the mental health community “just checks all the boxes off.”

The project took more than six months of planning and execution and involved the whole Astro team as well as some of Astro’s suppliers, such as cabinet manufacturer Miralis, sink supplier The Galley, and various trades.

“We’re really excited about the end result and how it’s going to make a difference in all these people’s lives,” Georgitsos says. “It’s not too often that small business can do such a large-scale project like that and we’re really proud of it.” 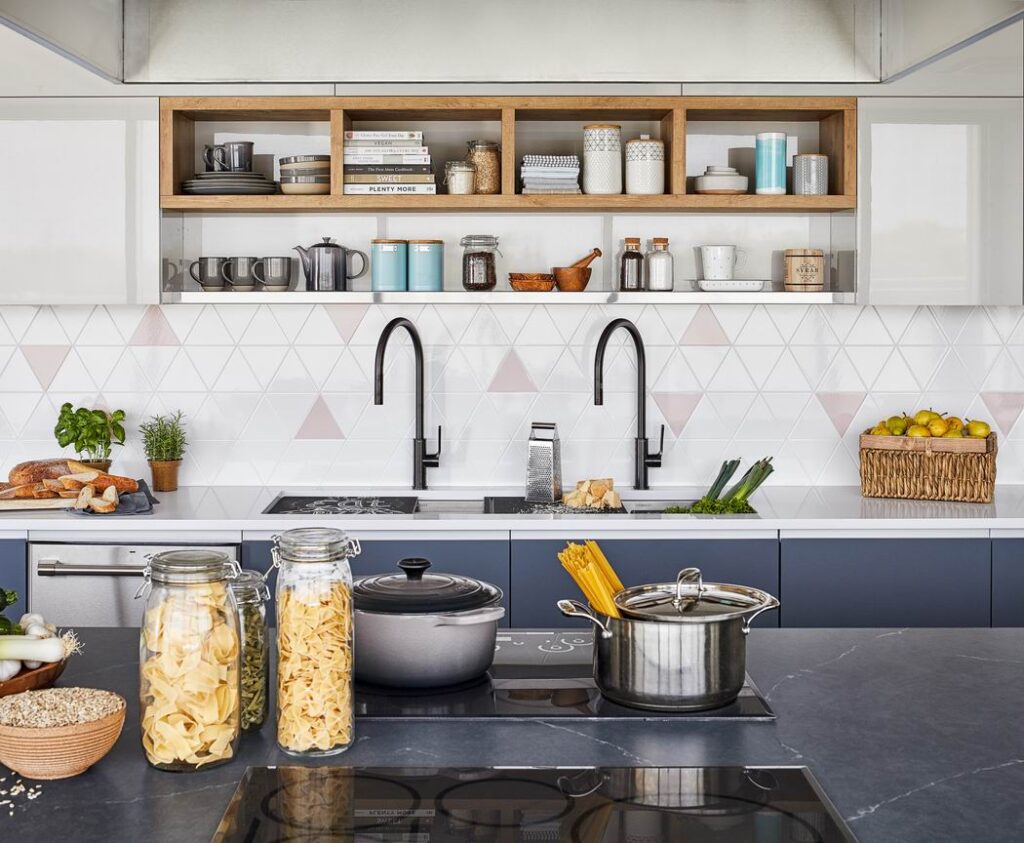 Facing cooktops and a multi-use sink with double faucets mean there can be many cooks in the kitchen. Photo: JVLphoto.com

While all of Astro’s designers were involved, two of them – Walter Bunda and Marina Medina – took the lead to make sure things stayed on track.

Bunda says it was much like working on a regular kitchen, “but three times the size.” The idea was to create something durable, modern, inviting and fresh.

It also had to accommodate a lot of users.

“There are multiple groups that actually use this kitchen, it’s not just an occupational therapist with their one client using it,” says fellow designer Nathan Kyle. “At times they have three different groups using the kitchen, so we had to make that space functional to accommodate that many people in there working.”

The room provides doubles of just about everything, including a giant island with facing cooktops, two mammoth sink stations, dishwashers, fridges, freezers, ovens – you name it. 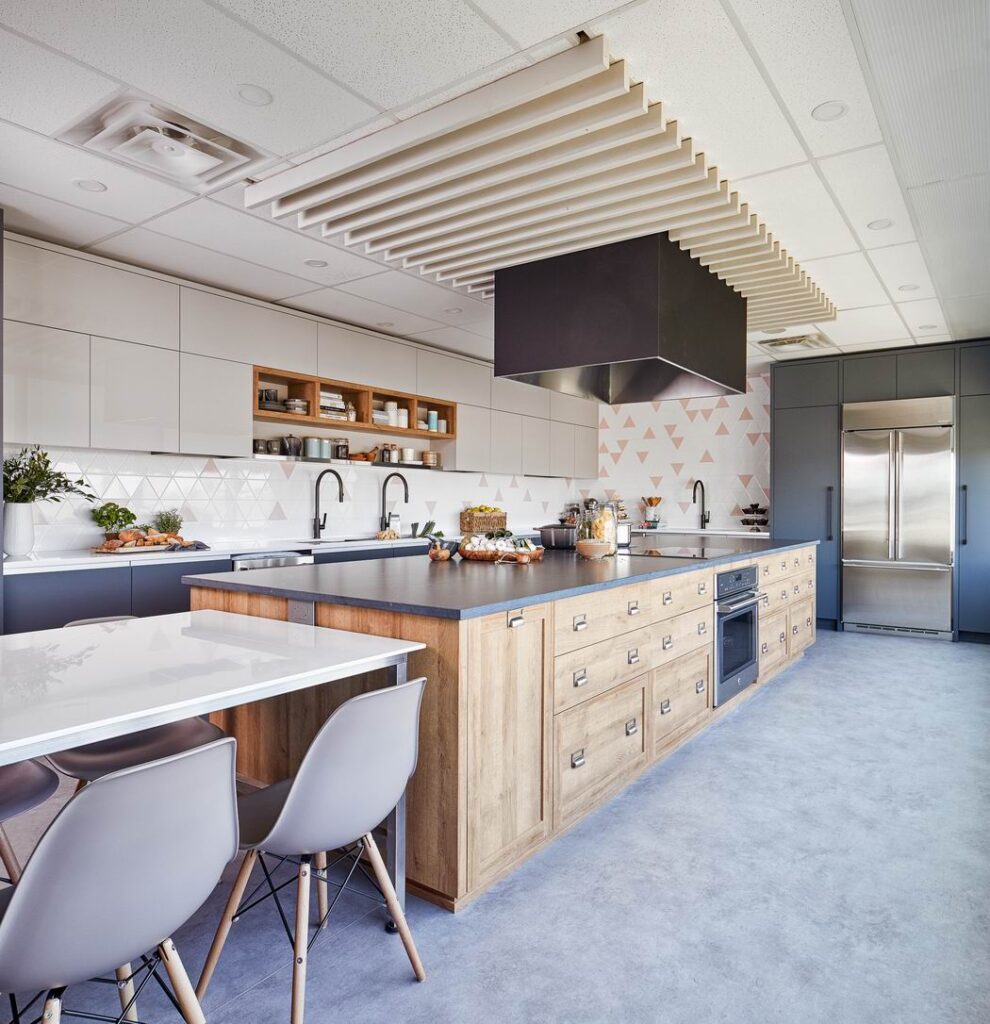 Designer touches like the “cloud detail” or lumber frame above the island add personality to the space. Photo: JVLphoto.com

Various programs at the Royal use the kitchen to develop life skills, social skills and vocational skills for both in and out patients, who are referred to as clients.

“Giving our clients an opportunity to develop an interest, to have a safe and therapeutic place that is so welcoming … is the perfect start for being able to work with our clients to foster that interest,” says Danielle Frenette, an occupational therapist in the schizophrenia program.

Programs also include bakery and catering services that supply various groups in the hospital, including providing baked goods for sale in the hospital café.

In designing the space, the Astro team had to balance the needs of the hospital’s programs with the desire to create a home-like setting. 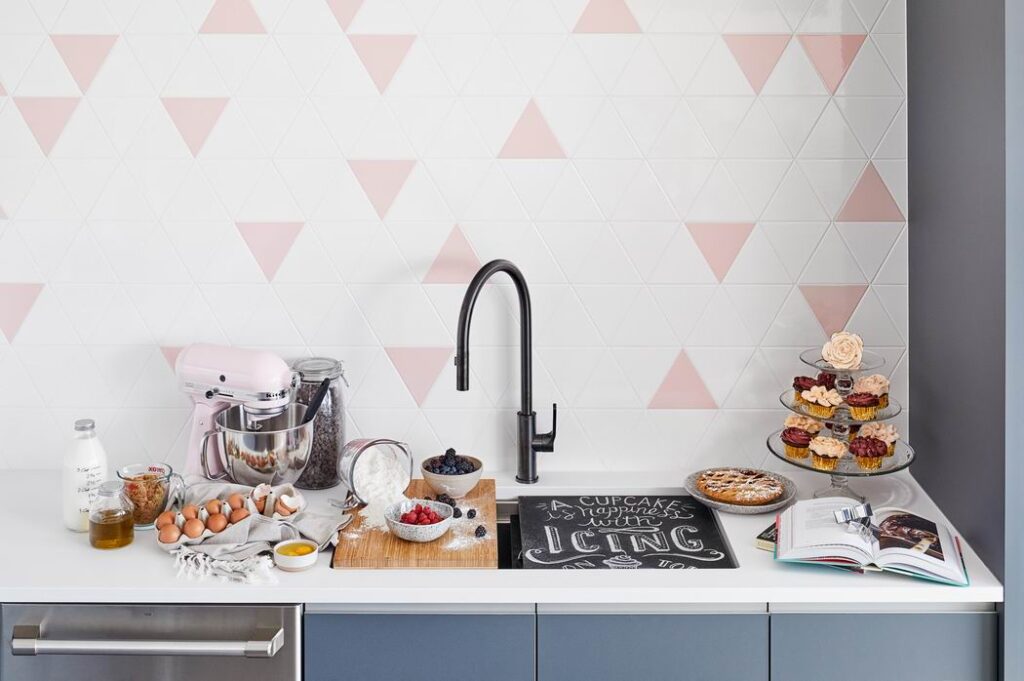 A second sink station adds to the room’s flexibility while a mix of pink and white triangles in the backsplash add some fun. Photo: JVLphoto.com

“It’s a very public space so it’s very different from designing for somebody who’s in their home because it’s less personal to one person, but it’s very personal to all these patients who are basically using this as a learning step to … adjust to normal life again,” says Kyle.

Low-maintenance materials like the Fenix laminated cabinets don’t leave fingerprints and resist scratches, for instance, while much thought was given to ensuring multiple work stations – even around a sink – would mean several groups could use the space at once without being in each other’s way.

There are also plenty of designer touches, like the “cloud detail” or lumber frame above the island, the oversize hood vent, and the playful backsplash of white and pink triangles.

“I don’t know if I could get away with a client giving me the option of going pink and white triangular tiles on the wall,” Bunda says, although the hospital staff loved it. 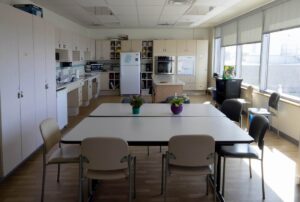 Before: The room had an institutional feel and appliances and cabinets were wearing out. 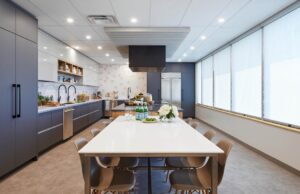 After: The room has become a welcome gathering space.

With files from Patrick Langston