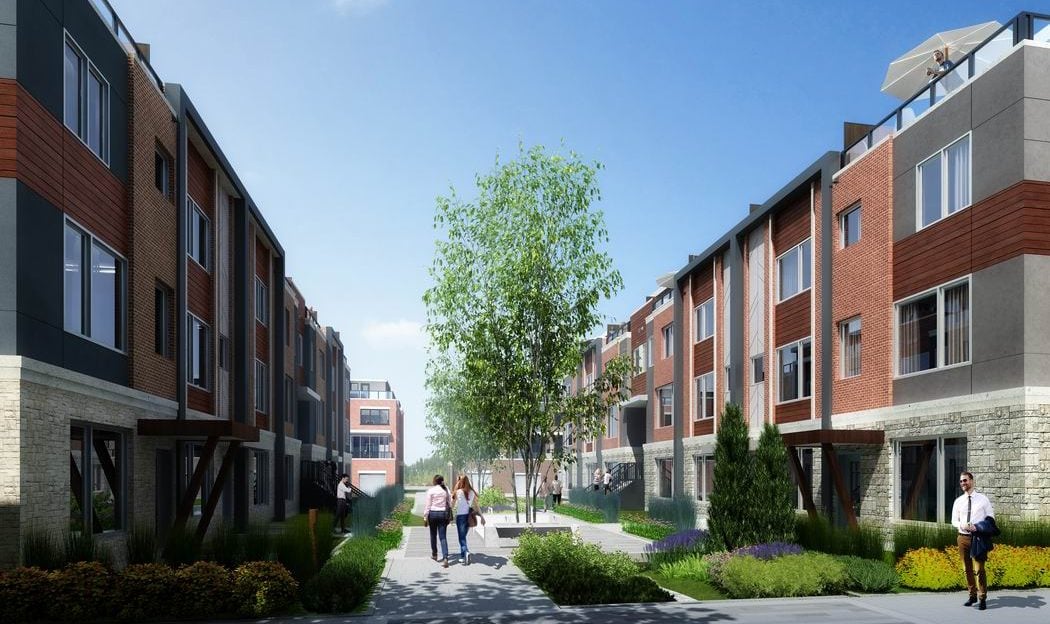 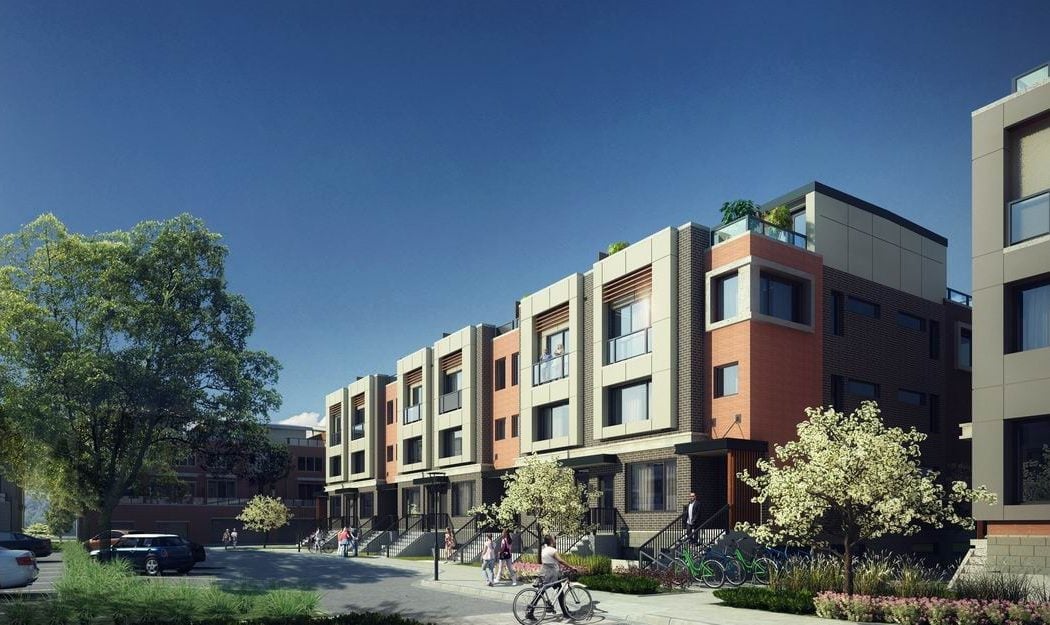 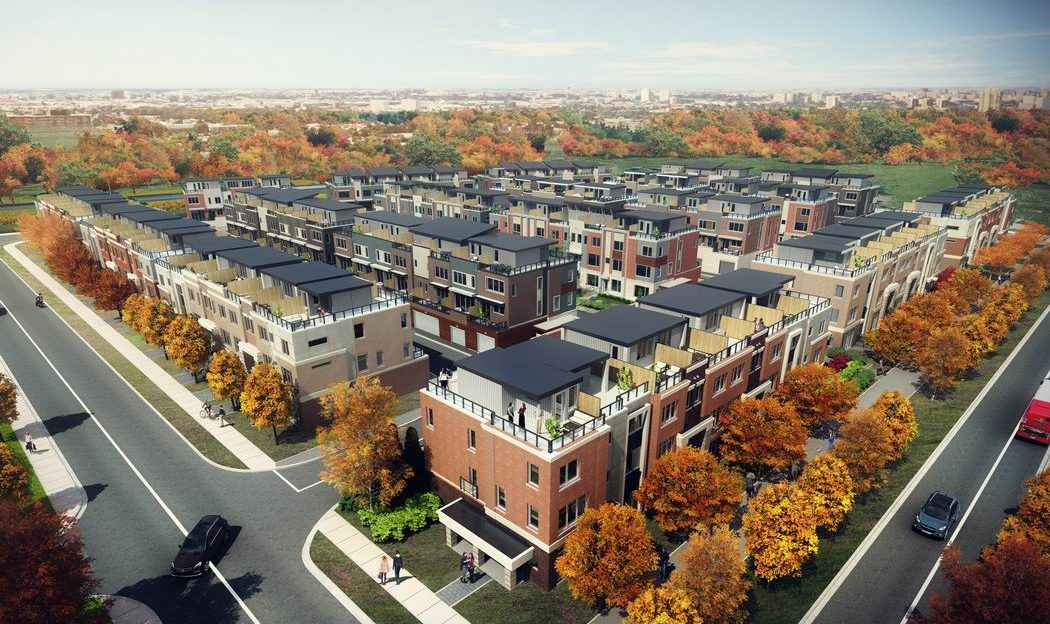 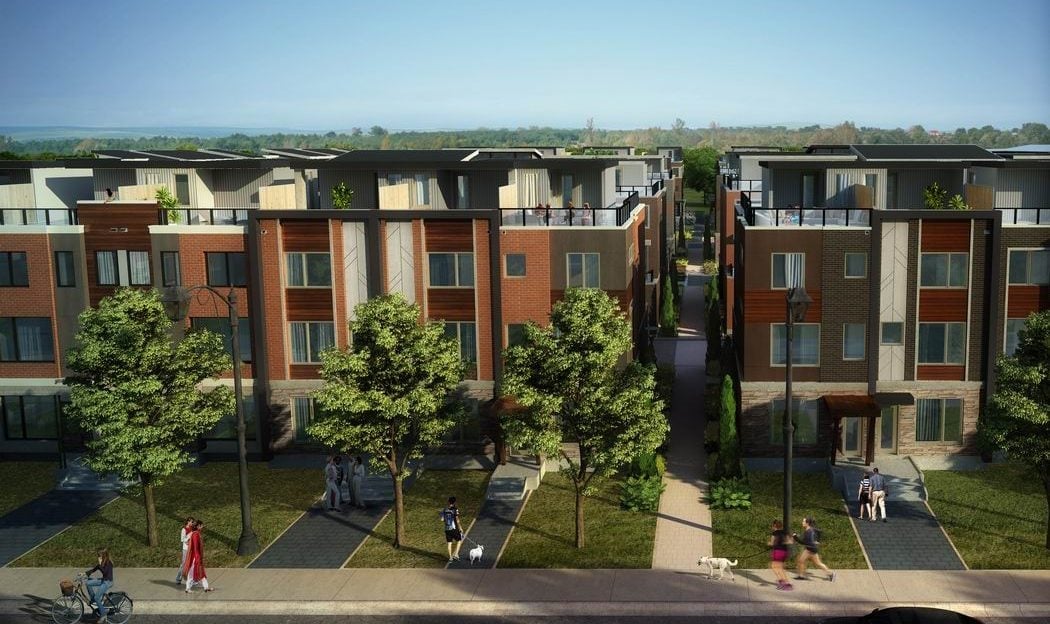 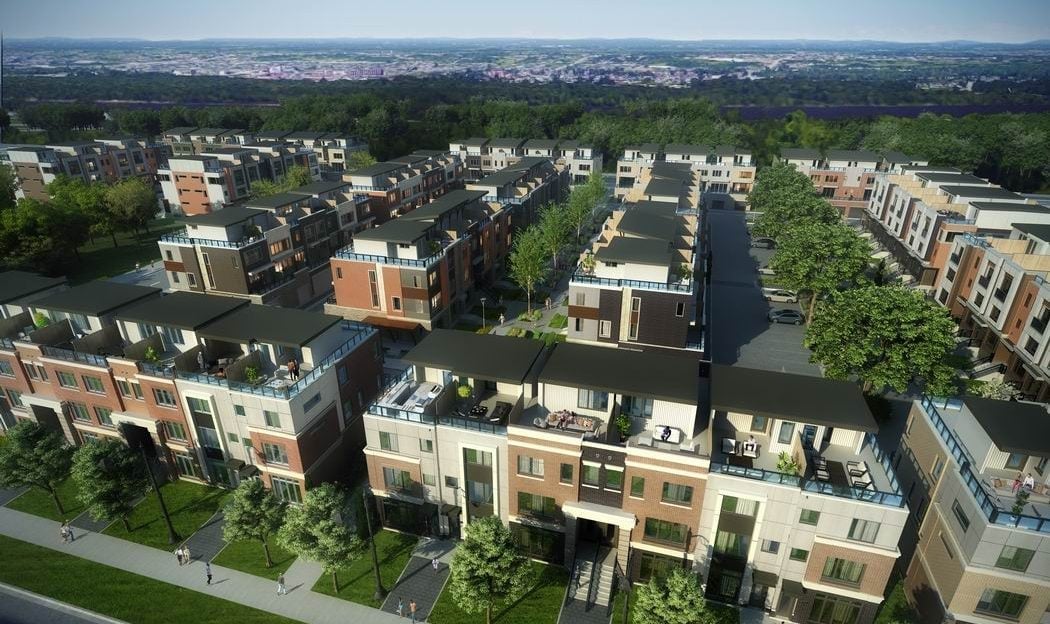 Making its first foray into Ottawa’s urban core, Mattamy Homes has launched with a mix of stacked and rear-lane townhomes at Wateridge Village.

Mattamy is the fourth builder to join the master-planned project on the former Canadian Forces Base Rockcliffe just east of downtown. The land is owned by the federal government and its real estate development arm, Canada Lands Company (CLC), is overseeing the project and selling off slices in stages to various builders.

There are strict guidelines that govern what can be built and how, with an overriding theme of providing a transit-friendly village within the city where residents can live, work, and play all in the same space. The mixed-use community will eventually see about 9,500 residents and 5,300 homes, along with a commercial core, lots of green space and other amenities on its 310 acres.

The nearly 14 acres that Mattamy has purchased represent the second round of land sales. The first, known as Phase 1A, was roughly 50 acres sold to builders Uniform Urban Developments, Claridge Homes and Tartan Homes. They launched a lower-density mix of 214 townhomes, semis and single-family homes in November 2016. Tartan has since sold out, Uniform has just a handful of lots, and Claridge has about 30 lots remaining of mostly towns.

Mattamy, which launched April 28, is the only builder so far in this higher-density second round, which is referred to as Phase 1B. The company plans to build about 650 units over the next five years that will include rear-lane townhomes, stacked towns and six-storey mid-rise buildings – another first for Mattamy in Ottawa.

The Toronto-based builder is typically known in Ottawa for building suburban low-rise homes and has not yet built mid-rise buildings here. When it was announced last year that the company would become a builder at Wateridge, Ottawa president Kevin O’Shea said the move was a way of diversifying and that Mattamy was looking forward “to the opportunities this will create for the company to venture into more infill opportunities.”

While condo buildings may be coming, for now only the townhomes have been released. And the response has been positive, says sales rep Amanda Bruce.

“We have been generating a large amount of interest on a daily basis,” she says. “There is no comparable product in the city and people are excited about the uniqueness we are offering.”

All of the towns represent fresh designs for Mattamy to conform to the guidelines set out by CLC. Exteriors are a mix of styles to give the impression the community developed over time, says manager of architecture Jessica McLellan, and use primarily brick and stone with fibre cement panel and aluminum accents.

Inside, they offer open concepts, granite kitchen counters and nine-foot main-floor ceilings in most units. The rear-lane towns are three storeys with either two or three bedrooms and 2.5 baths. Sizes range from 1,568 to 1,903 square feet.

The stacked towns are all two bedrooms, with either one or 1.5 baths and sizes ranging from 892 to 1,261 square feet. (See our Wateridge Village development profile for current starting prices.)

Up on the roof

A key feature of most units is a rooftop terrace, which is offered on all rear-lane towns and the upper stacked towns. (Lower stacked towns come with a patio.)

“People are loving the rooftop terraces, the level of finishes and proximity to downtown, green space and amenities,” says Bruce, who sees Wateridge appealing to everyone from first-time buyers to those who are downsizing.

“This is such a special community that features 10 parks, it’s steps from the Ottawa River and downtown, commercial space is coming into the community, everything will be walking distance, very bike and pedestrian friendly,” she says. “There is such a diverse product line planned for this development, there is truly something for everyone.”

First occupancy for Mattamy’s homes is expected in June 2019.