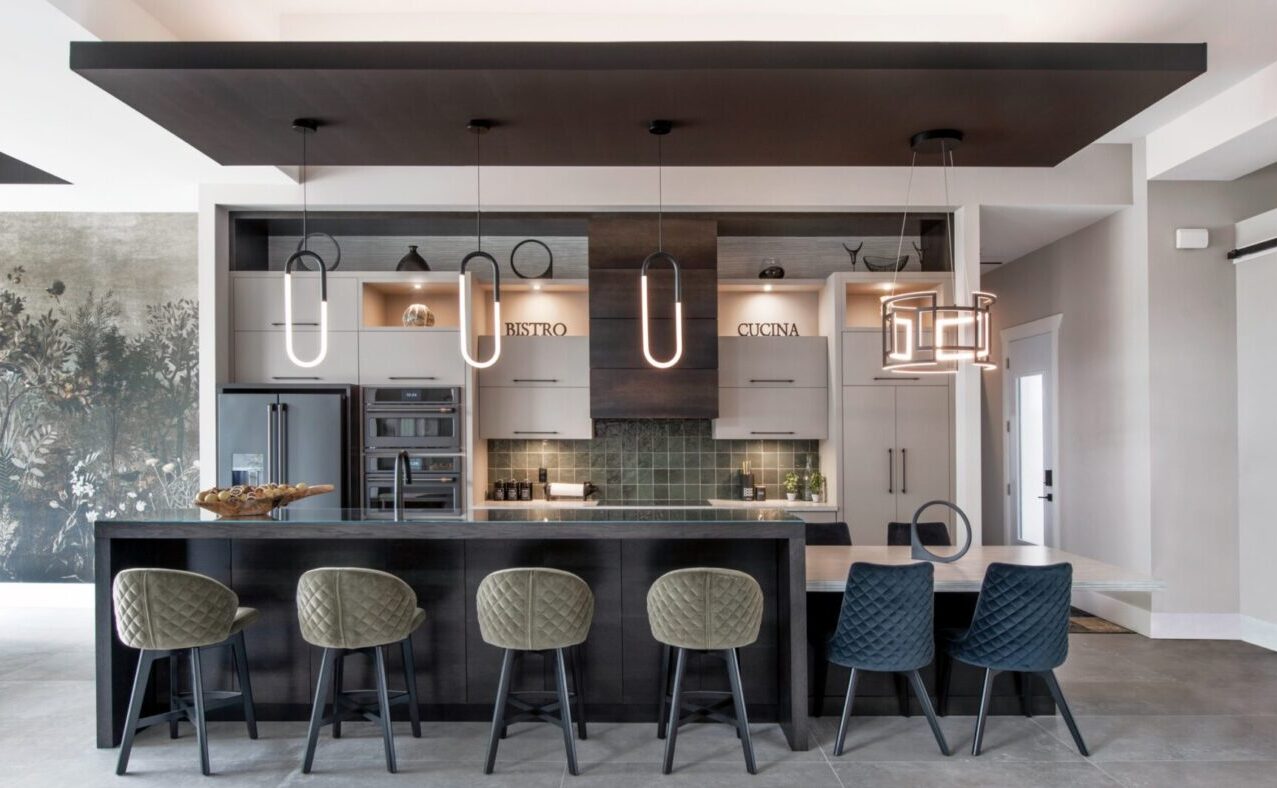 A contemporary kitchen by Potvin Construction featuring an architectural-like design and extensive engagement by the homeowner has captured the 2022 People’s Choice Award.

The prized All Things Home People’s Choice Award is part of the annual Housing Design Awards recently hosted by the Greater Ottawa Home Builders’ Association. The award is the only one for which the public votes and it sees a range of projects competing for top honours, from production and custom homes to renovations, kitchens, bathrooms and more. Potvin won the trophy after five rounds of voting online as well as at last month’s Fall Home Show.

“We’re very proud,” says Pierre Dromaguet, sales and millwork design manager at Potvin, which won three other trophies, all for kitchens, at the design awards. “When you’re competing apples to apples that’s one thing, but when you win overall that’s something else.” 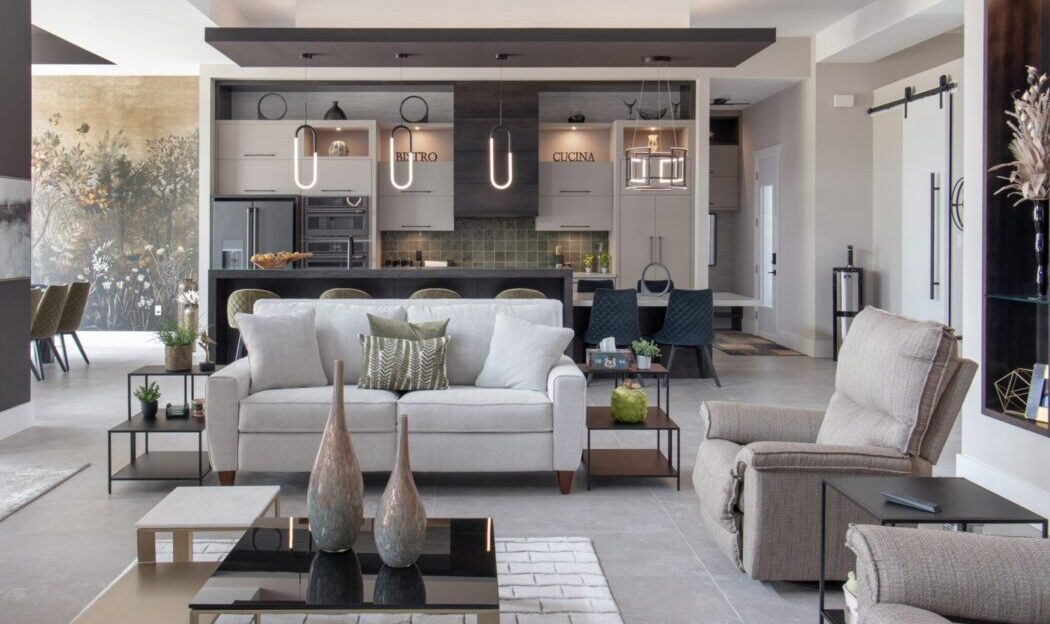 The open-concept kitchen, which connects directly with the living room and is brightly lit thanks to a wall of windows in the adjacent dining room, is part of a custom bungalow in Rockland.

Combining a commercial vibe with a welcoming feel, the kitchen is deceptively simple: a large back wall housing flat-doored cupboards and appliances along with a large, stepped island that includes two distinct eating areas.

The island is bar height on one side and has a lower food preparation area on the side closest to the wall, which also houses the sink, garbage disposal, dishwasher and more storage. Made with a walnut veneer, the massive island helps anchor the kitchen visually without being overwhelming, while the wood’s simple dark grain contrasts pleasingly with the more detailed appearance of the laminate countertops and tiled floor.

Overhead, a trio of contemporary LED pendant lights by Kuzco and a nearby chandelier bring the softness of curves to the linear space while according with the kitchen’s contemporary design.

Like the lights, the emerald-toned tiled backsplash helps soften the design and its natural colour and texture connect visually with a nature-themed wallpaper mural in the dining room.

The back wall — with its niches, changing volumes, varied tones and textures, and overall visual balance — is particularly architectural.

“There are a lot of shapes and it’s more intricate than we’re used to seeing in modern design,” says Dromaguet about the 2022 People’s Choice Award winner. “There’s a nice balance of colours and shapes.”

The back wall also echoes the home’s front façade, says designer Caroline Nantel, who worked on the project and also designed Potvin’s other recent award-winning kitchens (she’s since left the company). “The exterior is a mix of materials and volumes, so we did the same for the kitchen.”

“I love design. I designed the whole house,” says Jacynthe Carriere who, with her husband, Alain, also played a central role in everything from grouting to painting her new bungalow.

For the kitchen — which was also a finalist in a custom kitchen category at the recent awards — Carriere provided sketches of what she wanted and Nantel says she took it from there. “She was an amazing client — very easy to work with. She had a modern vision and wasn’t afraid to mix colours and patterns. I just needed to push further the design and make it more modern and make sure all the finishes were mixing well.” 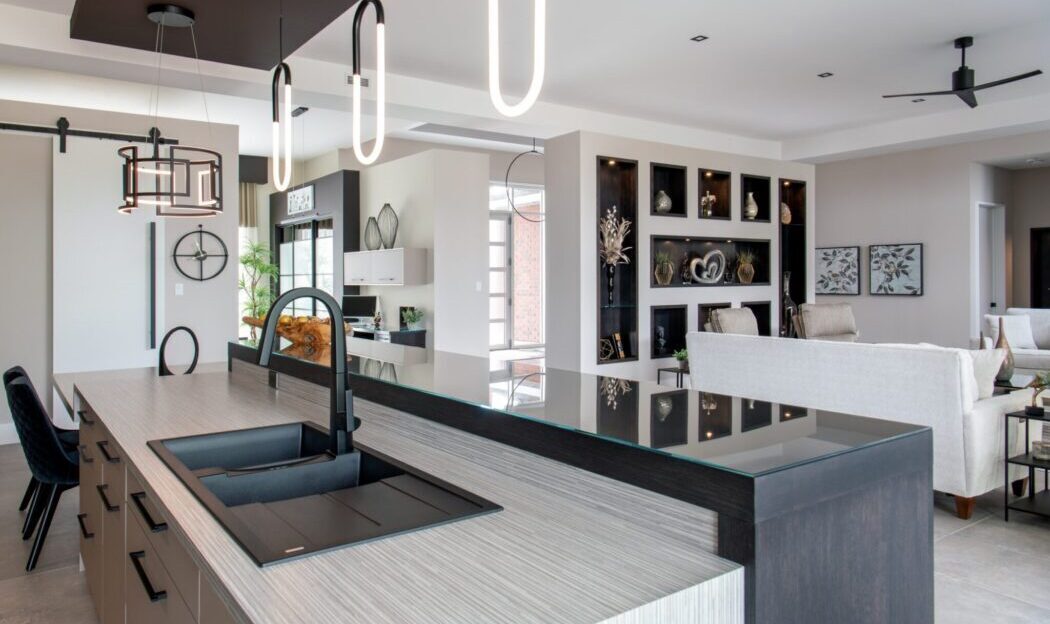 Carriere says what she wanted was a kitchen with a clean, functional layout, especially important when entertaining. “We have a big family. We had 22 people for Thanksgiving dinner. I have lots of countertops, so I can do everything on my big island and turn around for the stove and everything is there. It’s easy.”

She also knew what she didn’t want: quartz or granite countertops. Instead, she went with laminate.

“You don’t have much of a choice with quartz and granite. I like funky design but with (stone) nothing captured my eye. That’s why I like my backsplash: it’s funky.”

Carriere also eschewed the design trend of concealing the fridge with panels that match the cupboards, says Dromaguet. “She really knew what she wanted. It’s a fridge, there’s no need to hide it.”

An enticing collaboration between homeowner and kitchen specialist, the trophy-winning space has a satisfying sense of rightness about it.

“Everything is where it should be,” says Dromaguet. 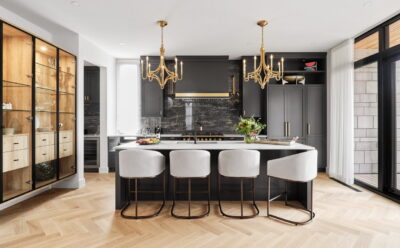