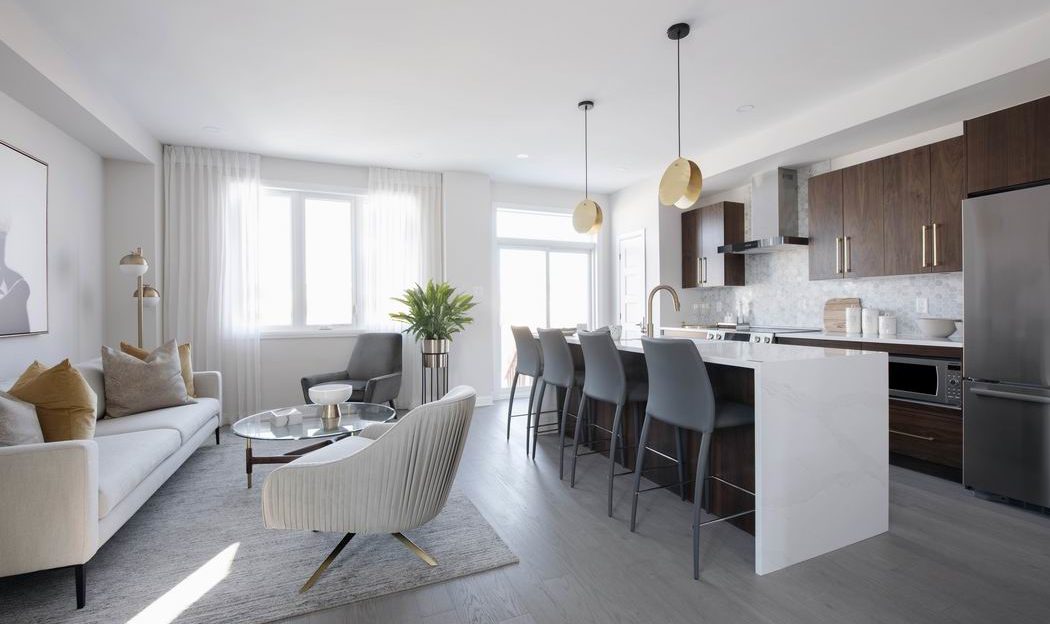 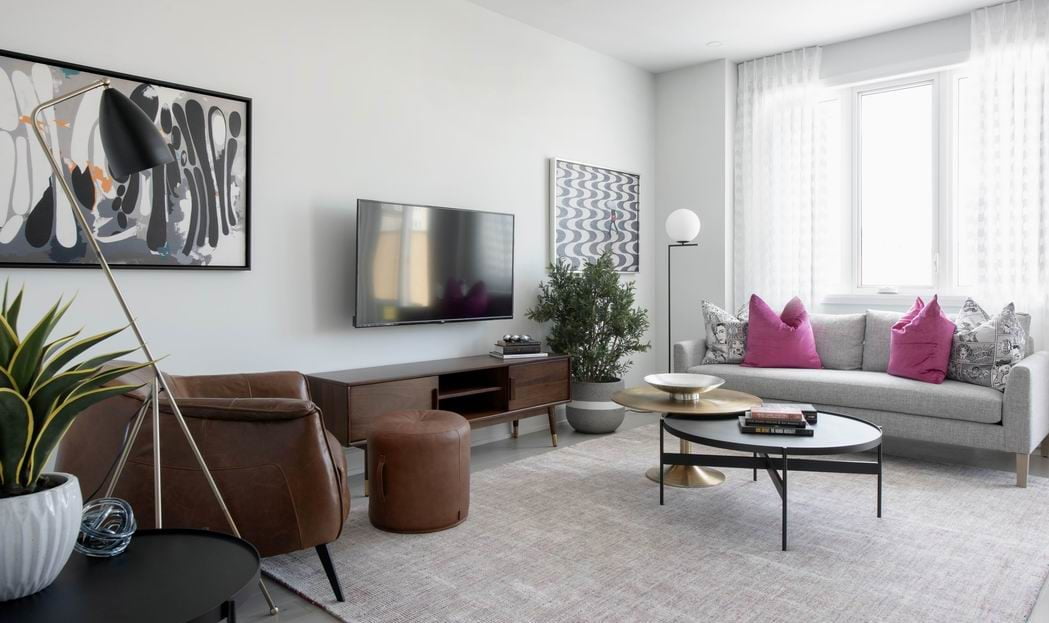 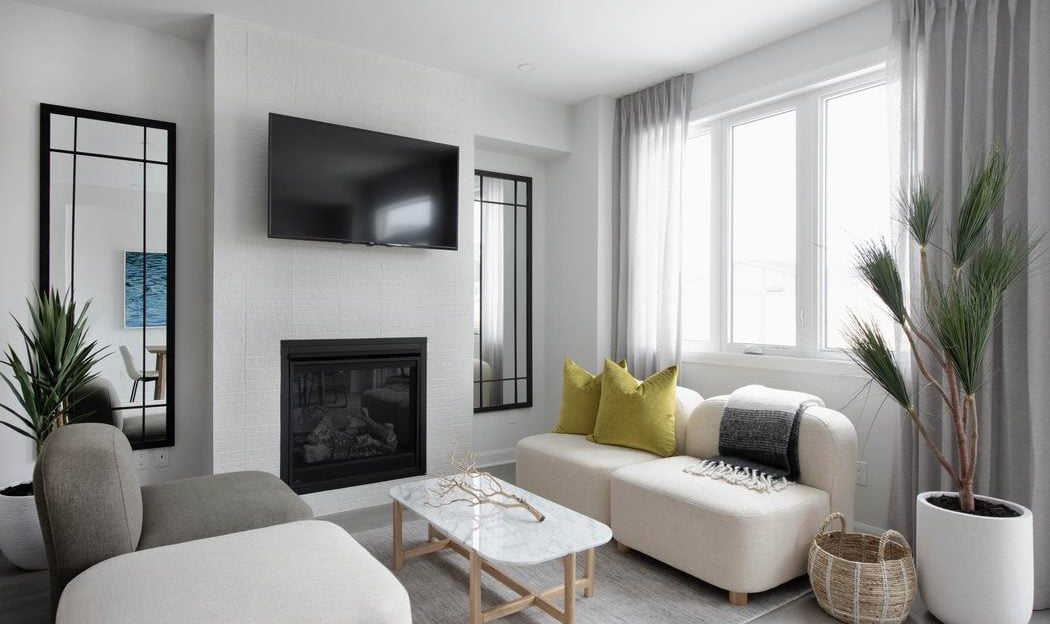 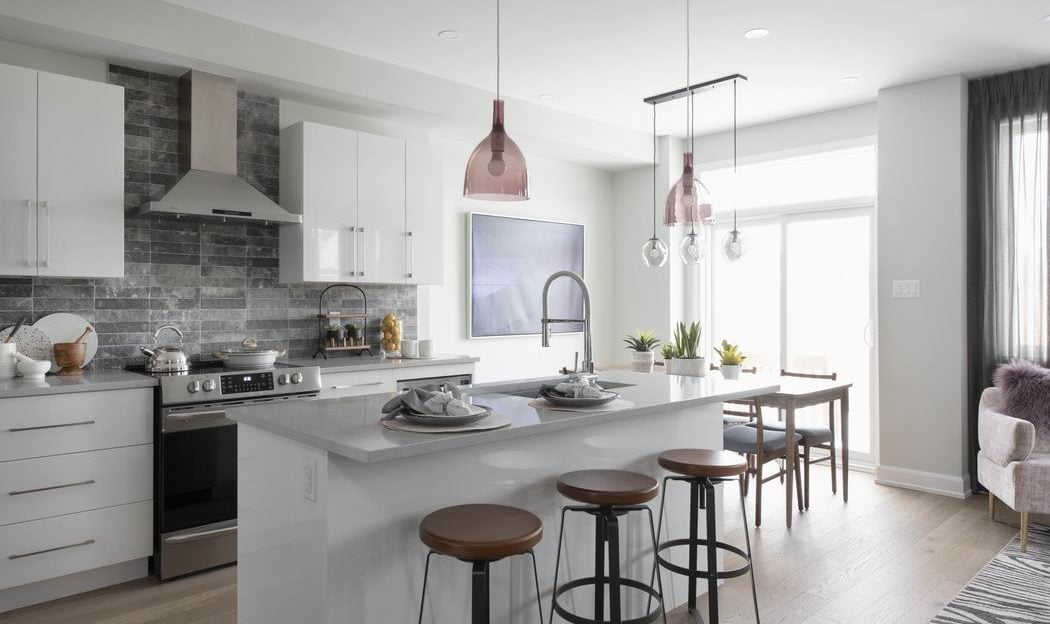 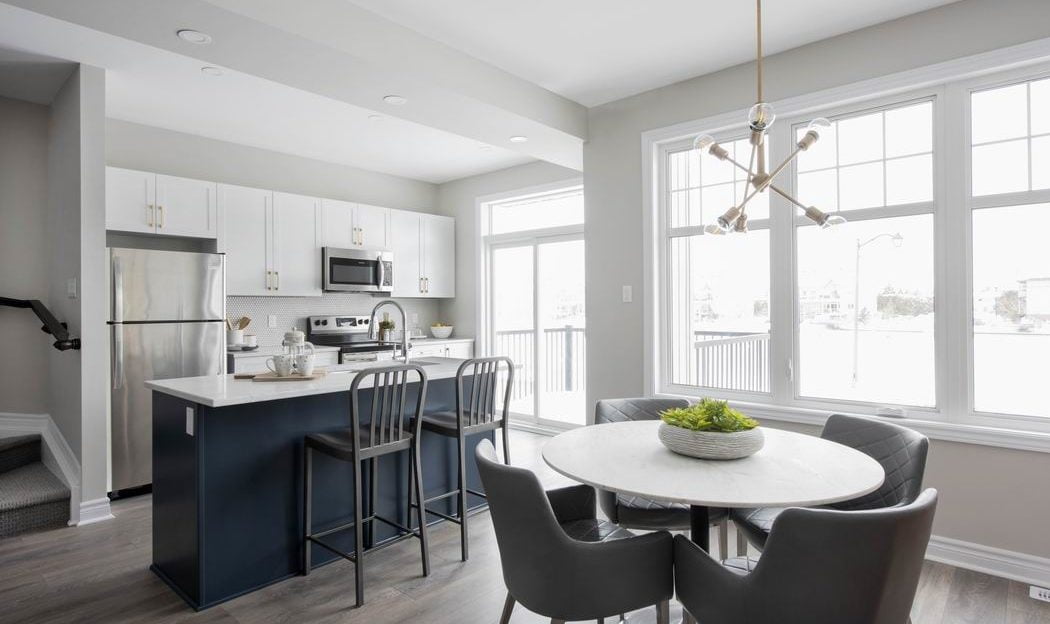 Filling a gap in its portfolio of model homes to tour, Minto Communities has opened five townhome models in Barrhaven to whet buyers’ appetites.

Like many builders in Ottawa’s hot real estate market, Minto has had difficulty keeping up with the demand for new homes, and its two Barrhaven communities — Quinn’s Pointe and Harmony — have been particularly popular, with the sites being temporarily sold out more often than not.

Harmony remains sold out until later this year, but Quinn’s Pointe is gradually offering more singles and towns while maintaining the social distancing precautions related to the COVID-19 outbreak (that social distancing also means the models are temporarily closed to the public, but they are available via virtual tours).

Quinn’s Pointe will ultimately see about 2,000 homes in a master-planned community near Greenbank and Barnsdale roads, while Harmony was initially planned to be 238 homes off Strandherd Drive west of Greenbank. Minto has since acquired another parcel of land next to the existing Harmony development and it is making its way through site plan approvals.

All five of the model homes that opened in February are townhomes, which speaks to the popularity of towns as a more affordable option for buyers. But it also fills a void in Minto’s model home portfolio — all the builder’s other models (in Kanata, Manotick and Orléans) are single-family homes.

“We know that most buyers would like to experience the space in person,” says director of marketing Jan Coulis. “Opening four models (from Minto’s executive townhome series) allowed us to showcase some of the most popular designs.”

Those four towns are all two-storeys and include open floorplans, three or four bedrooms, nine-foot main-floor ceilings and have been re-designed to have a bigger finished basement space.

“They are really big, open and bright with the extra square footage,” says Coulis.

The revised plans were first launched with the release of Avalon Aquaview in Orléans on March 7 and will be available in upcoming releases of Arcadia and Quinn’s Pointe. Floorplans range from 1,551 to 2,218 square feet and starting prices are expected to be in the high $400,000s, depending on the design and community.

The fifth model is a back-to-back three-storey town from Minto’s Avenue series, which feature ground-floor laundry, an open-concept main living area with a balcony on the second floor and two or three bedrooms on the third floor. They range from 1,154 to 1,382 square feet and are available at Avalon Aquaview and in Barrhaven, although both sites are temporarily sold out. For the last release in January, they ranged from the mid- to high $300,000s.

Response to the models so far has been “very positive,” says Coulis. “We have had a lot of people through the homes who would like to buy and are waiting for the next release, and also homeowners who have already purchased and have been waiting to see the space and get some decor ideas for their upcoming design centre appointments.”

The two-storey executive towns all feature about $80,000 worth of upgrades, including hardwood floors and quartz counters, while the three-storey back-to-back town has about $20,000 in upgrades. 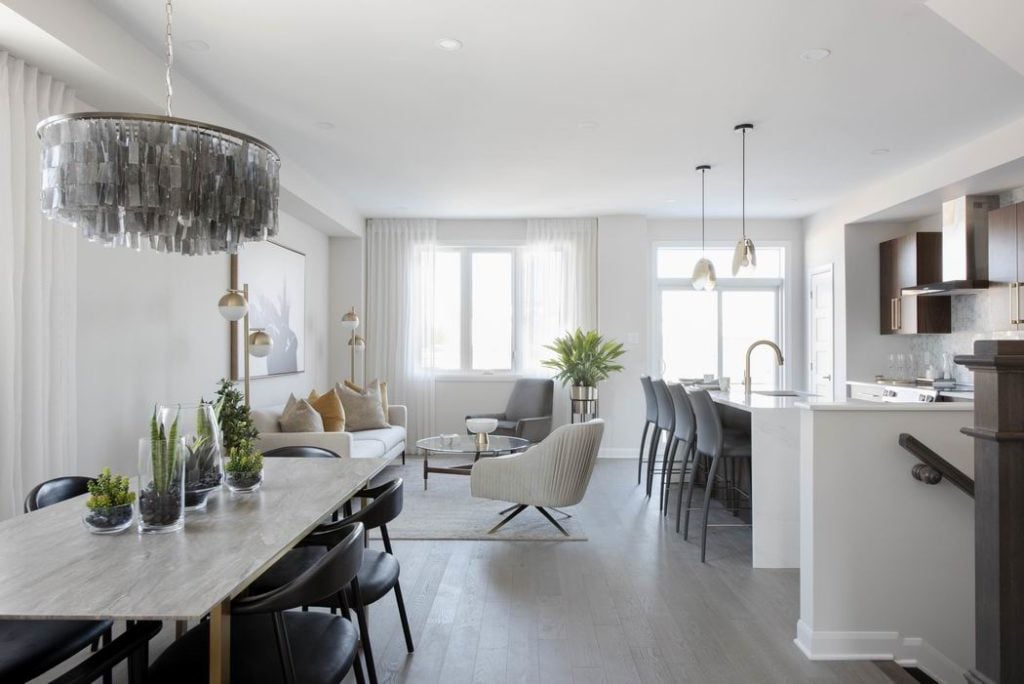 At 1,918 square feet, this end unit is in the mid-range in terms of size for the executive towns. Although not overly large, it’s airy and bright, thanks to the extra windows in both the dining room and powder room.

The open-concept layout makes for easy entertaining and the transitional styling with warm tones and clean lines are meant to appeal to a downsizing couple. 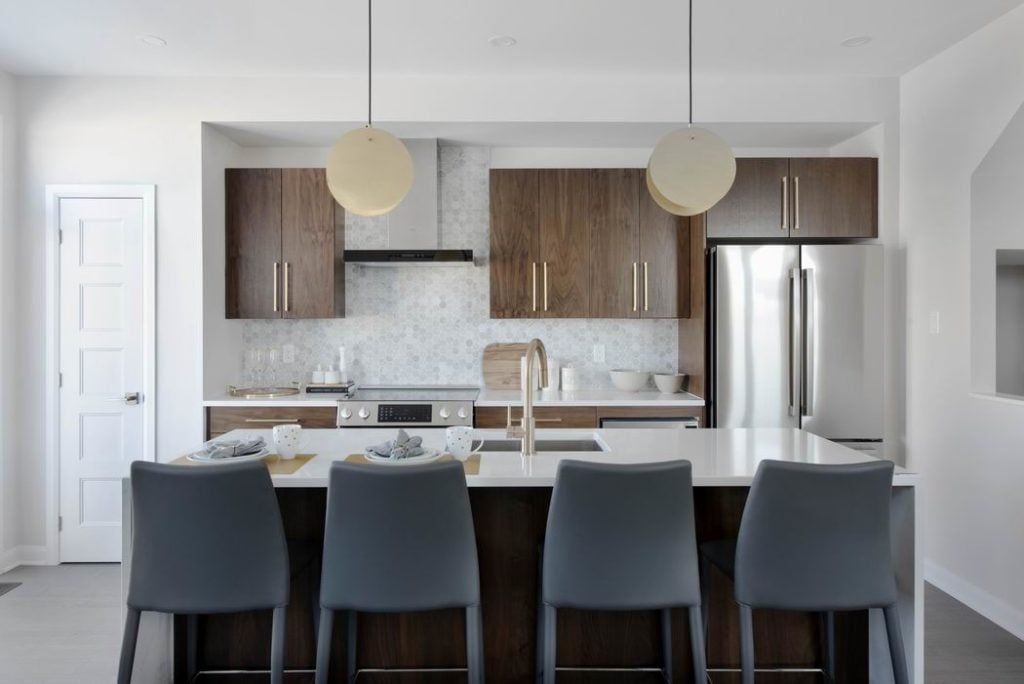 The decor is a little more formal and elegant than the other townhome models, says designer Donna Correy of Kiss Design, which was brought in to style the homes, with finishes that are a mix of traditional choices in tiles and cabinetry, hardwood and carpeting. Yet the colour scheme is warm golds and creams with pale greys bringing a contemporary feel.

Adds Coulis: “The finishes in this home are elegant and upscale, for a couple who are moving from a single-family home and would like a floorplan that works better for their lives, but don’t want to compromise on style.” 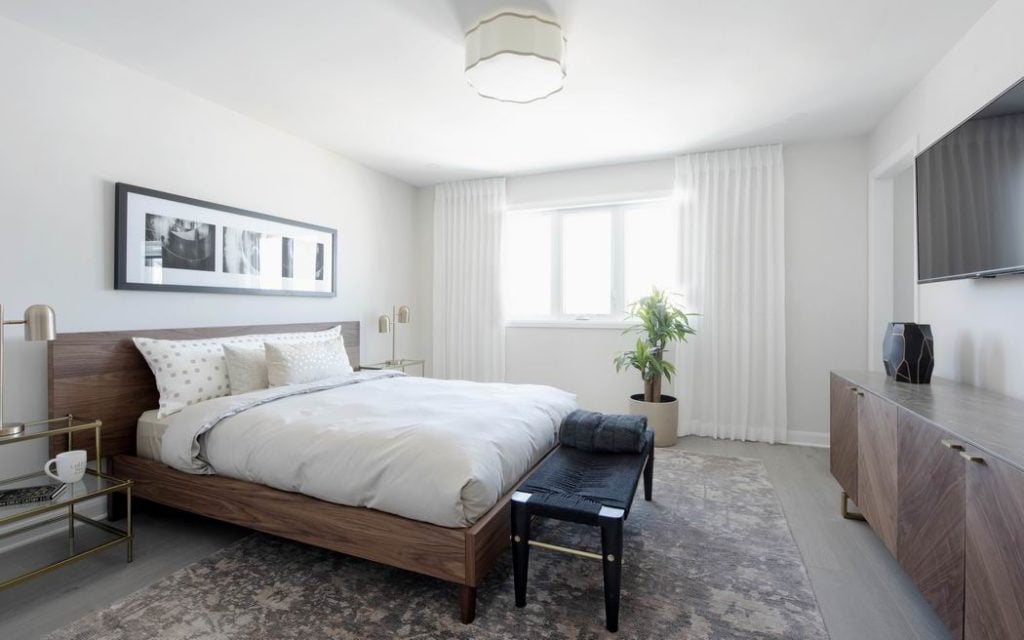 The master suite is roomy without being excessive and the two secondary rooms are decorated as a guest bedroom and a home office. 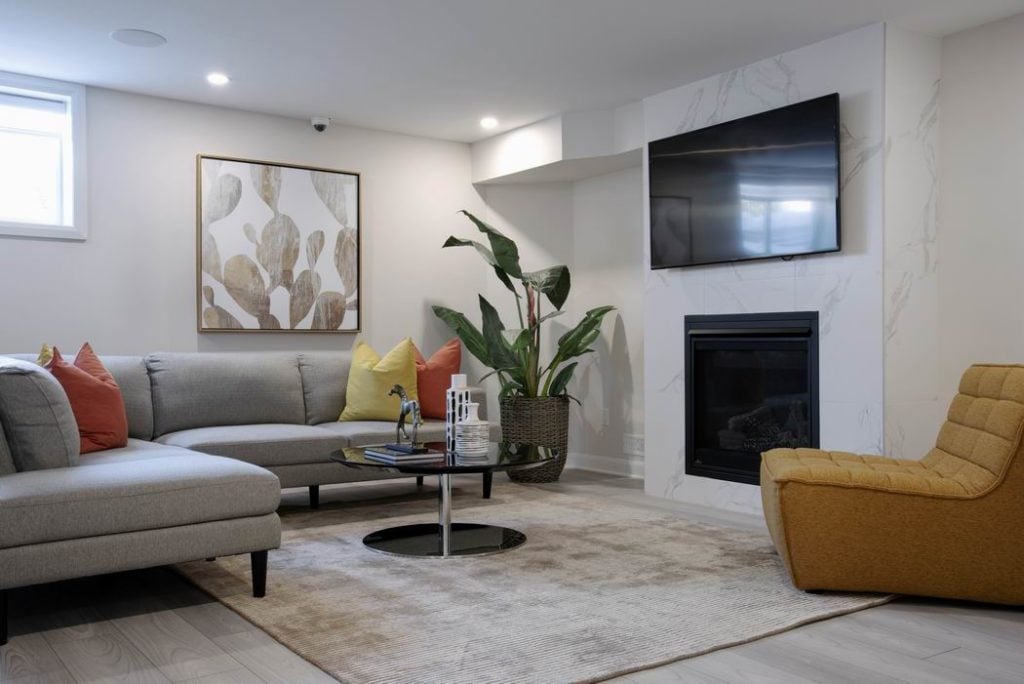 Meanwhile, the extra space in the redesigned basement family room is noticeable, feeling like a main-floor space with lots of elbow room, great natural light and including the optional powder room.

MORE: Take a 3-D virtual tour of the Monterey End 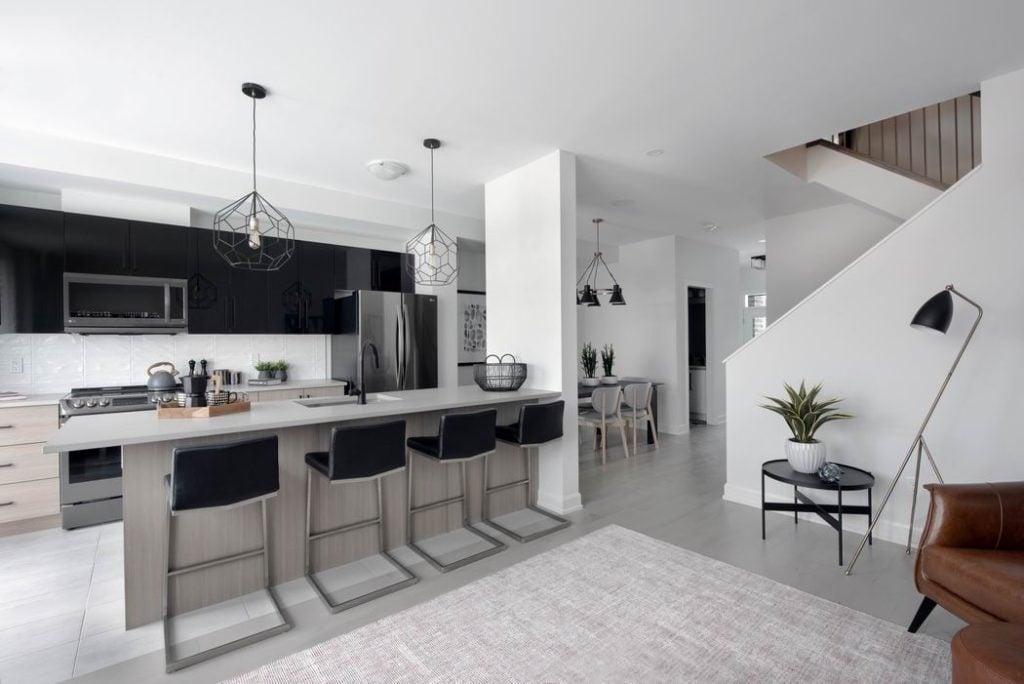 Slightly smaller than the Monterey at 1,768 square feet, the Haven has a similar open feel and remains bright despite being an interior unit. It’s also an edgier design theme.

“This is our more modern, trendy home that was decorated for a couple without kids,” says Coulis. “There are a lot of fun elements in this home with bright colours, geometric shapes and comic book artwork.” 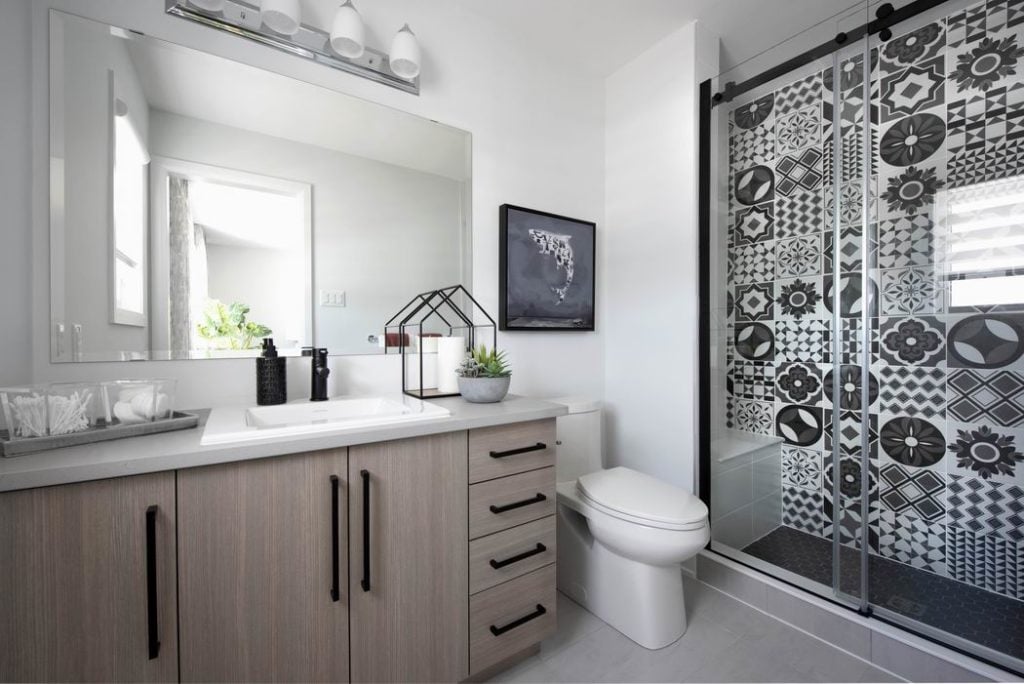 The kitchen sets the tone, with upper flat-panelled cabinets in high-gloss black, paired with light fixtures also in black. And the geometric shapes are found in the tile in both the powder room and master ensuite for a sense of fun.

Like the Monterey, the two secondary rooms are decorated as a guest bedroom and a home office and the basement family room maximizes the space for relaxing.

MORE: Take a 3-D virtual tour of the Haven 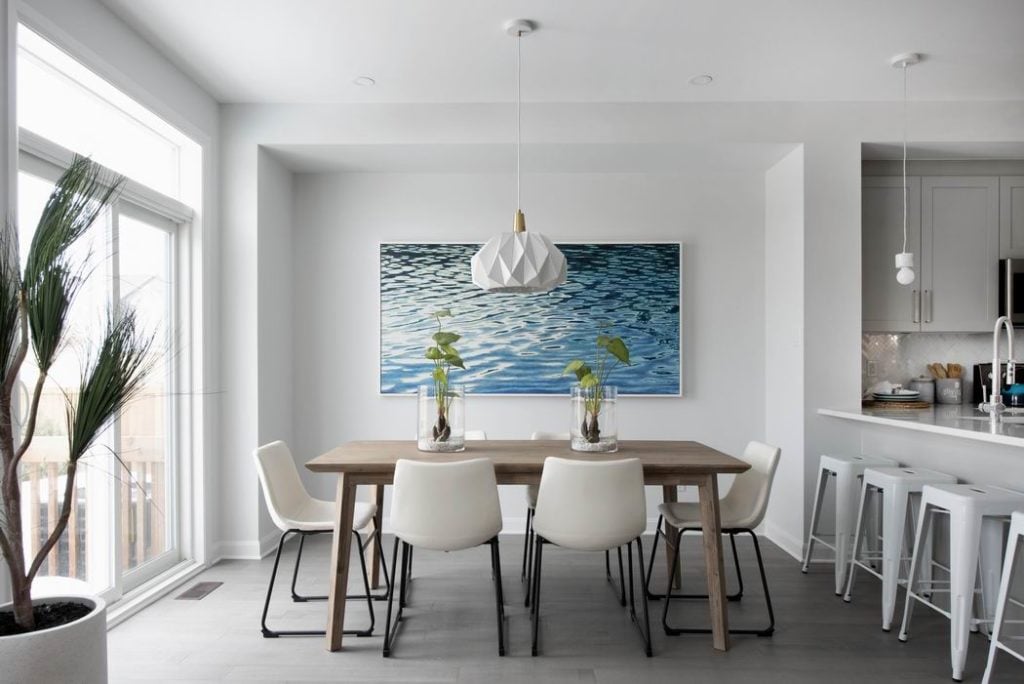 This is a new floorplan for Minto that was introduced last year. Similar in size to the Haven, the Laguna switches up the layout to stretch the dining and living room across the back of the home.

“This is our coastal beach home, designed with a family in mind,” says Coulis. “The kitchen in the Laguna offers a ton of cabinet and countertop space for families who like to cook and entertain.”

The U-shaped kitchen is roomy and the peninsula acts like an island for easy entertaining. 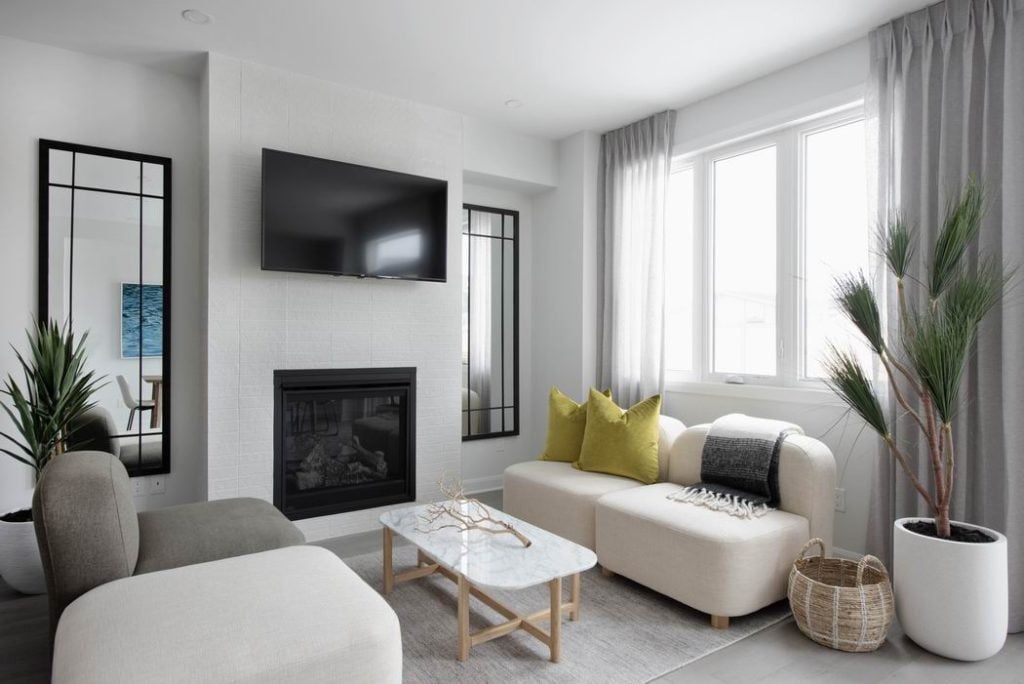 The home has a slightly more traditional feel with warm greys and whites — including white light fixtures where the Haven has black — and the white fireplace surround is a nice touch.

“(It uses) a decor palette of muted teals and pistachio — right on trend — to create a beachy vibe that is both young and hipster inspired,” says Correy.

MORE: Take a 3-D virtual tour of the Laguna

This is the largest of the four executive townhome models at 2,084 square feet and is shown with the optional fourth bedroom.

As an end unit, it benefits from extra windows for more natural light and there’s a sense of entry when you enter the home. 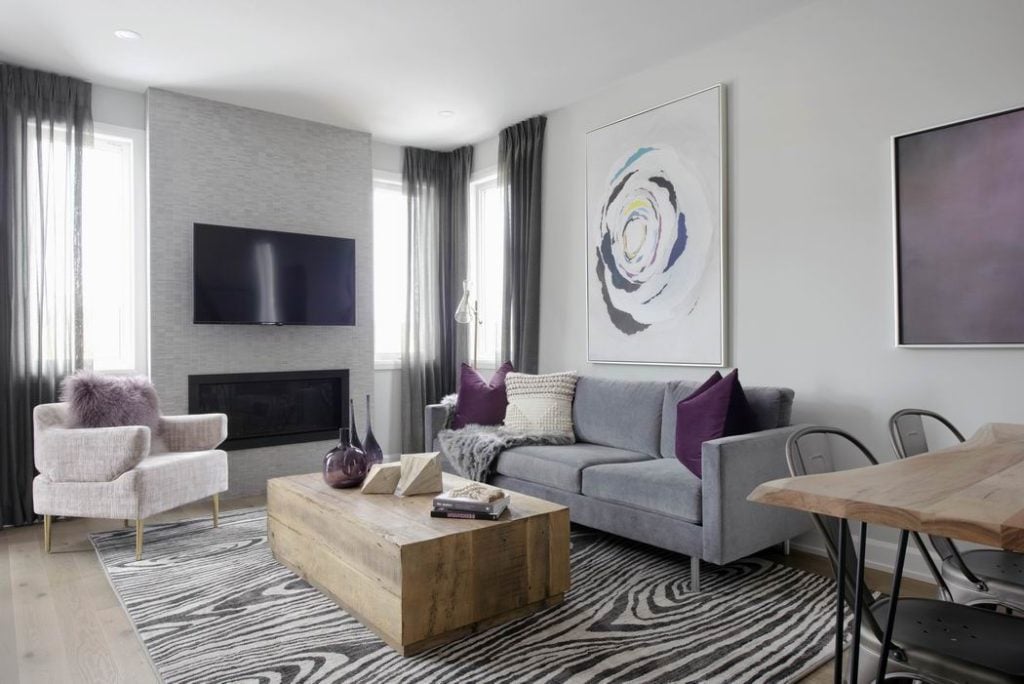 The decor has more of a rustic flair, with an emphasis on earth tones, from the textured brick backsplash (and similarly textured ensuite shower tile) to the barnboard coffee table and live-edge dining table.

But the rustic is also balanced with the refined in the high-gloss white kitchen cupboards and glass pendants. 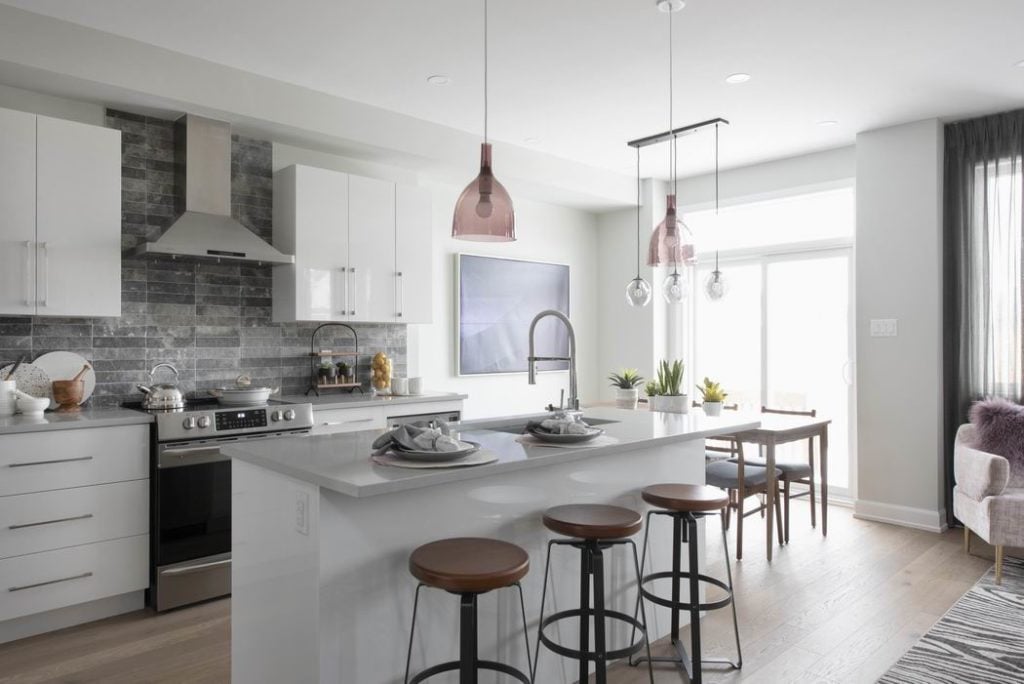 “This is the quintessential family home,” says Coulis. “The main floor has space for a breakfast nook as well as a formal dining room, and a mudroom off the garage to accommodate the busy lives of families.”

Adds Correy: “We chose to outfit the designated dining room with a work table that services as craft, homework, etc., as the proximity to the eating area allowed this. Our thought was that families could then have a large table/chairs in the breakfast area always free of family activities.”

MORE: Take a 3-D virtual tour of the Tahoe End 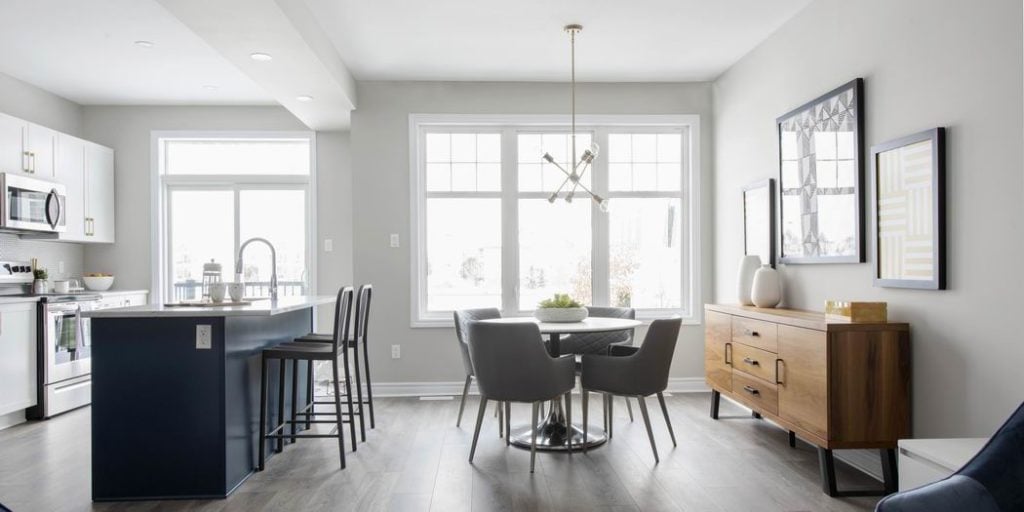 Canal is the three-storey back-to-back townhome model. Although much smaller than the executive towns at 1,268 square feet and with two bedrooms rather than three, it’s aimed at a first-time buyer looking to enter the housing market at a more affordable level.

“Canal has an urban vibe, for the single buyer or young couple just starting out and buying their first home,” says Coulis. “The second bedroom has been set up as a home office to accommodate working from home.” 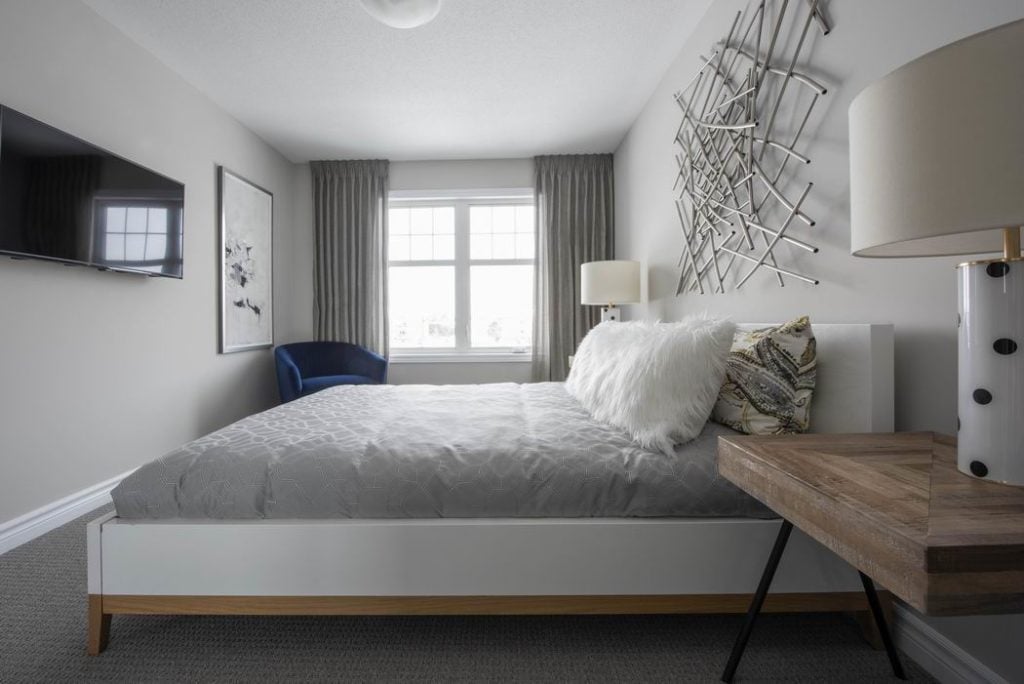 Like all the floorplans in this Avenue series, Canal features the entry, garage and laundry room on the ground floor, open-concept main living area on the second floor and bedrooms on the third. There is no basement. 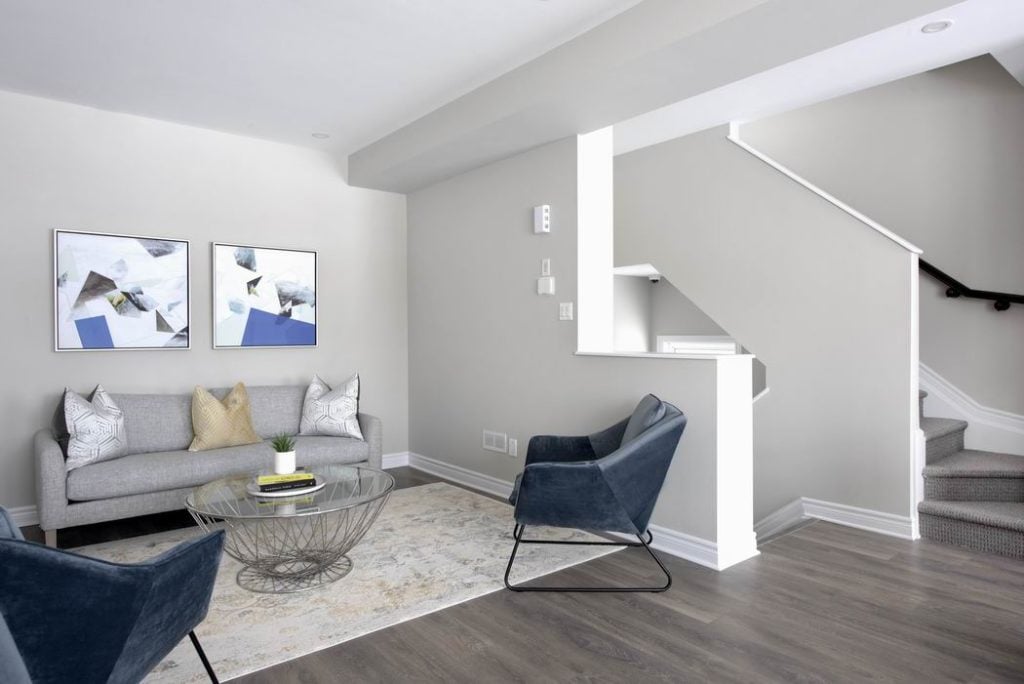 As an end unit, Canal benefits from extra windows in the stairwells, bringing a ton of natural light throughout all three levels. And, like all the Avenue floorplans, it offers a roomy balcony on the main living level for handy outdoor space.

MORE: Take a 3-D virtual tour of the Canal

While the models are temporarily closed due to COVID-19 precautions, they can normally be seen at Minto’s Barrhaven sales centre, which services both Quinn’s Pointe and Harmony, at 4005 Strandherd Dr. Get details via our development profiles.

Initial release at Harmony sells out in minutes