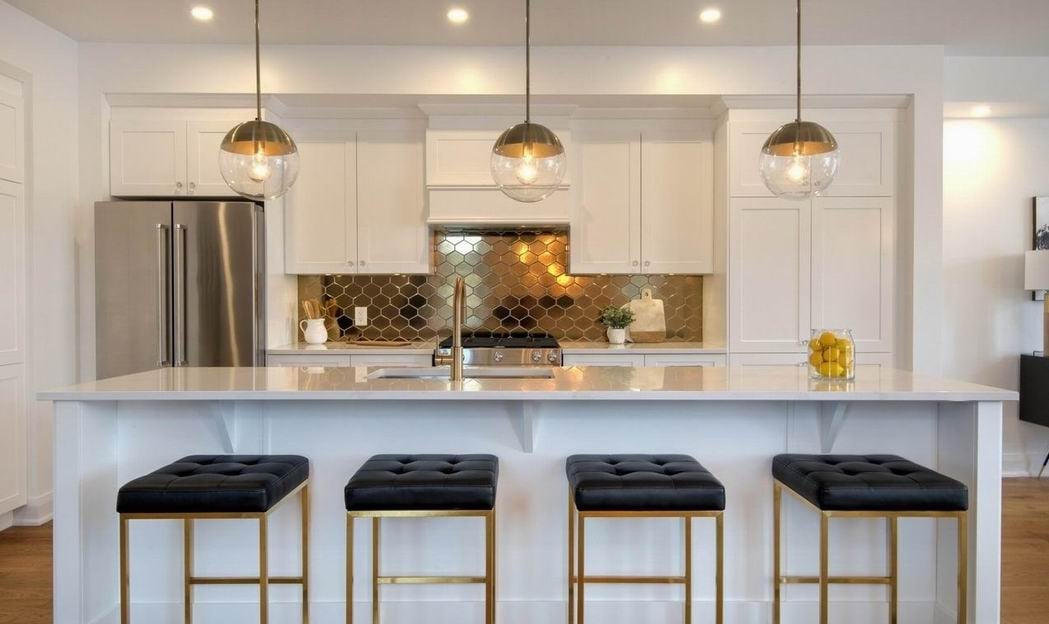 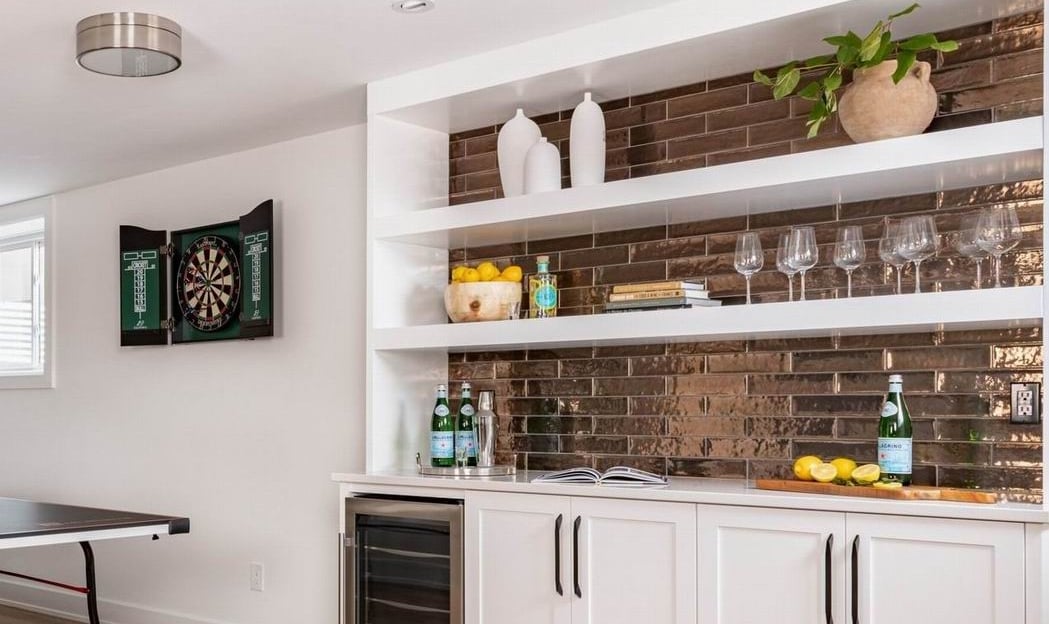 Metallic tile can subtly add reflection and drama without overdoing it, says Josée Sigouin of West of Main, who used it as the basement bar backsplash in Glenview’s Blakely model.
PHOTO CREDIT West of Main 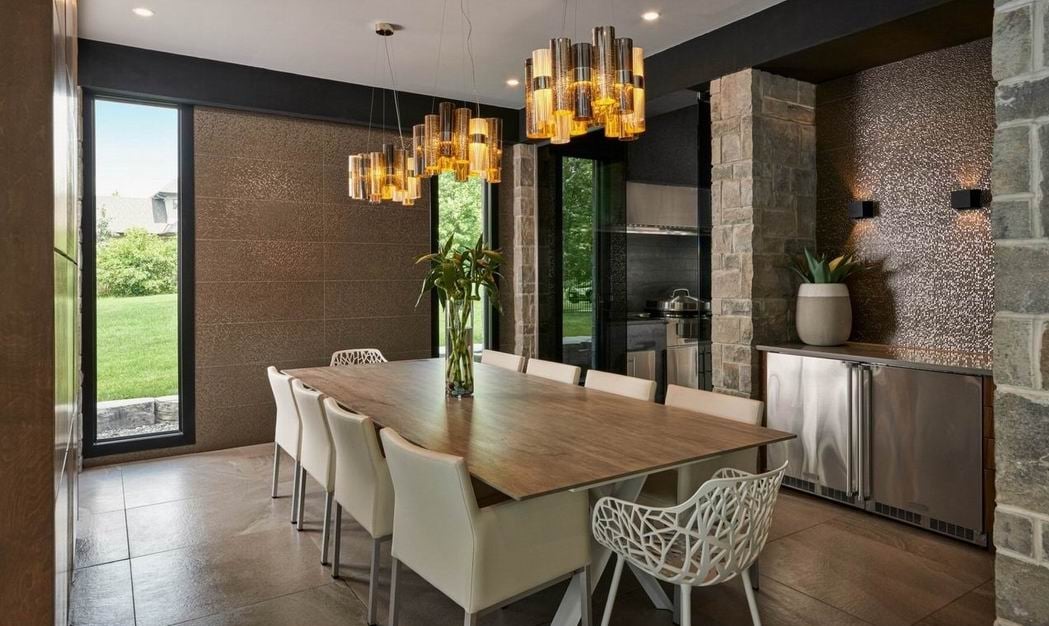 Designer Julinda Balca wanted a moody tile in this pool house by Brenmar Construction. The wall tile between the windows and above the counter is Cubica at Euro Tile & Stone.
PHOTO CREDIT Photolux Studio 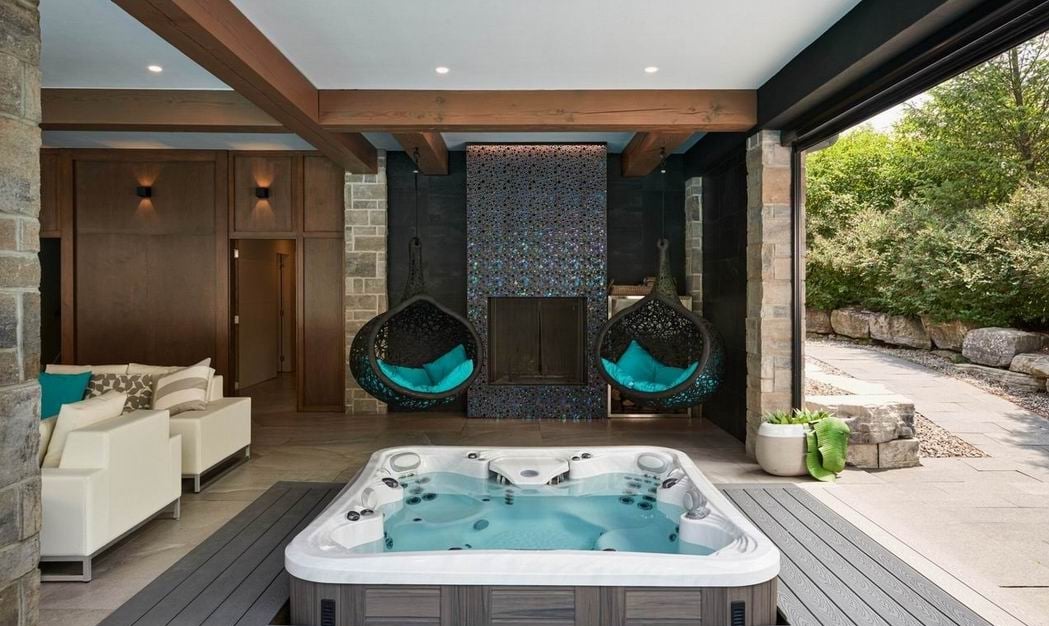 Some say it’s a trend, others say it’s always been around; either way, metallic tile — or at least metallic-looking tile — has become all the rage in Ottawa homes.

More than a dozen instances of it popped up in entries at last fall’s Housing Design Awards, prompting a closer look at the shimmer and sheen being added to our spaces.

“We’re seeing it all over North America, not only in Ottawa,” says Mattia Colasanti, who is product manager for Ottawa tile supplier Euro Tile & Stone. 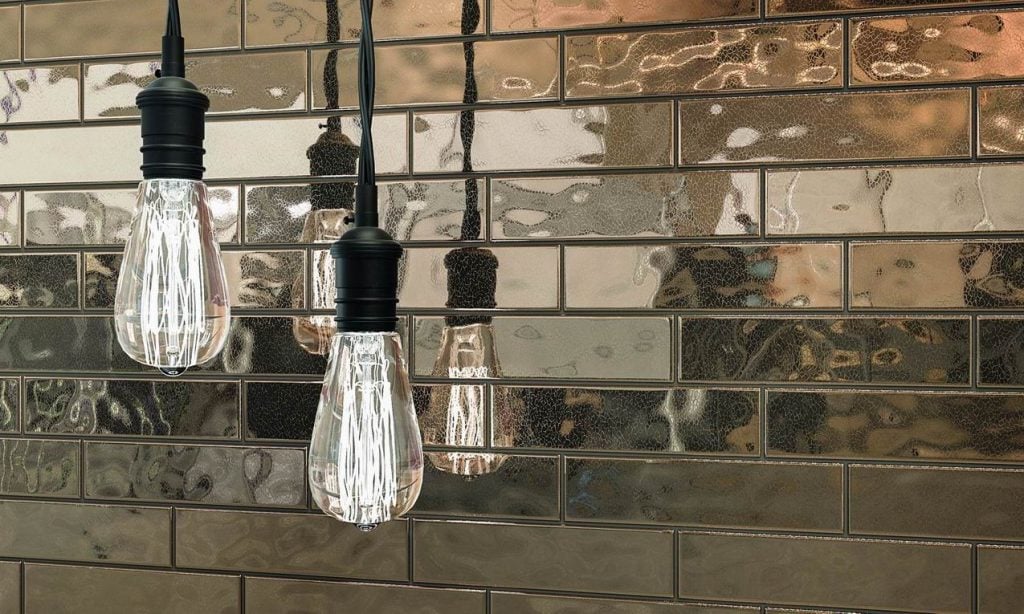 Most of the products found locally are sourced in Europe, where Colasanti began noticing metallics at trade shows about three years ago. “Now going to a trade show there’s so much metallic.”

The use of metallic tile is taking root here because Ottawa “has taken a turn to be much more design-focused than it ever has,” she says. “We’re seeing people taking much more risks with their designs.”

The selections of metallic tiles available is changing, too. Six or seven years ago we’d see touches of metal in mosaics, she says. “Now it’s taken a dramatic turn and you’re seeing it much more than you ever had… 10 years ago when we would see metallic it meant sparkly and that’s not it at all anymore. It’s gotten much more sophisticated.” 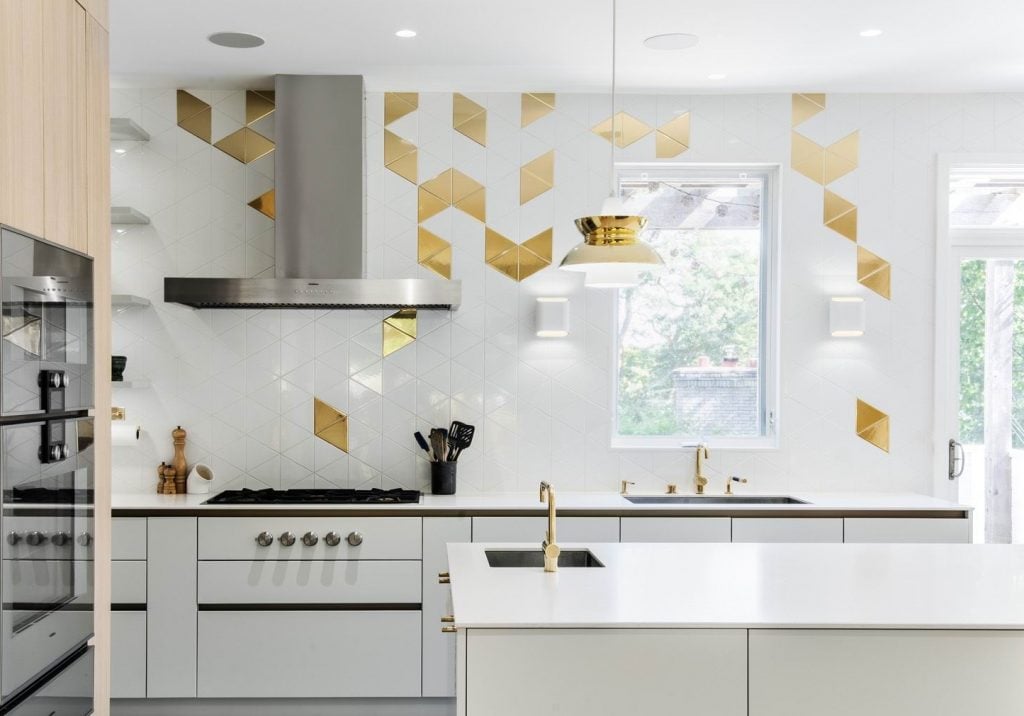 At a time when we’ve been enamoured of the farmhouse/industrial look that’s a bit rustic and aged, designer Brenda MacPherson sees our embracing of metallics as a way of bringing in a bit of opulence for balance.

“It can make things look more upscale,” she says. “It gives it that little extra punch… Maybe people are getting away from the Scandinavian look that’s very earthy and plain, adding a bit of bling but keeping it simple and not going overboard.”

MacPherson added some bling to a custom bungalow — ironically one built on a farm — for a client who has a lot of personality and wanted to show that in her home.

The powder room features a wall in a fish-like shimmering tile, the ensuite includes a hint of glam in the vanity backsplash and the kitchen backsplash creates the illusion of metallics by using a black mosaic that’s dotted with tiles in a high-gloss finish (all from Euro Tile & Stone). 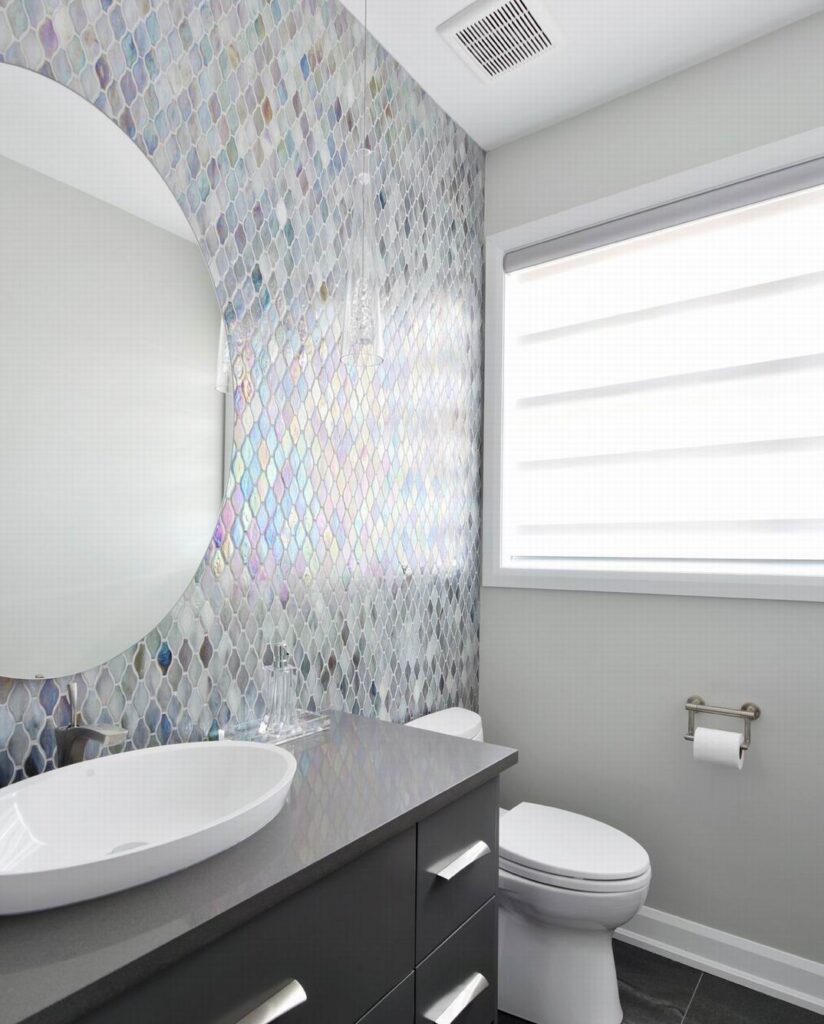 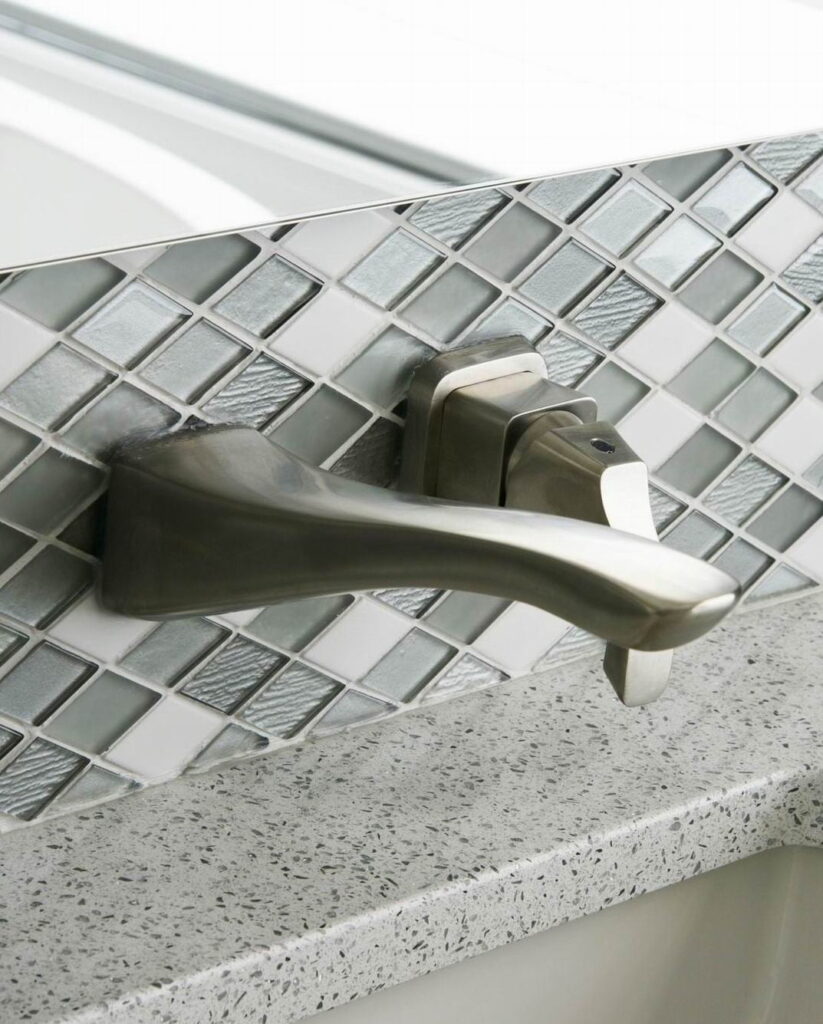 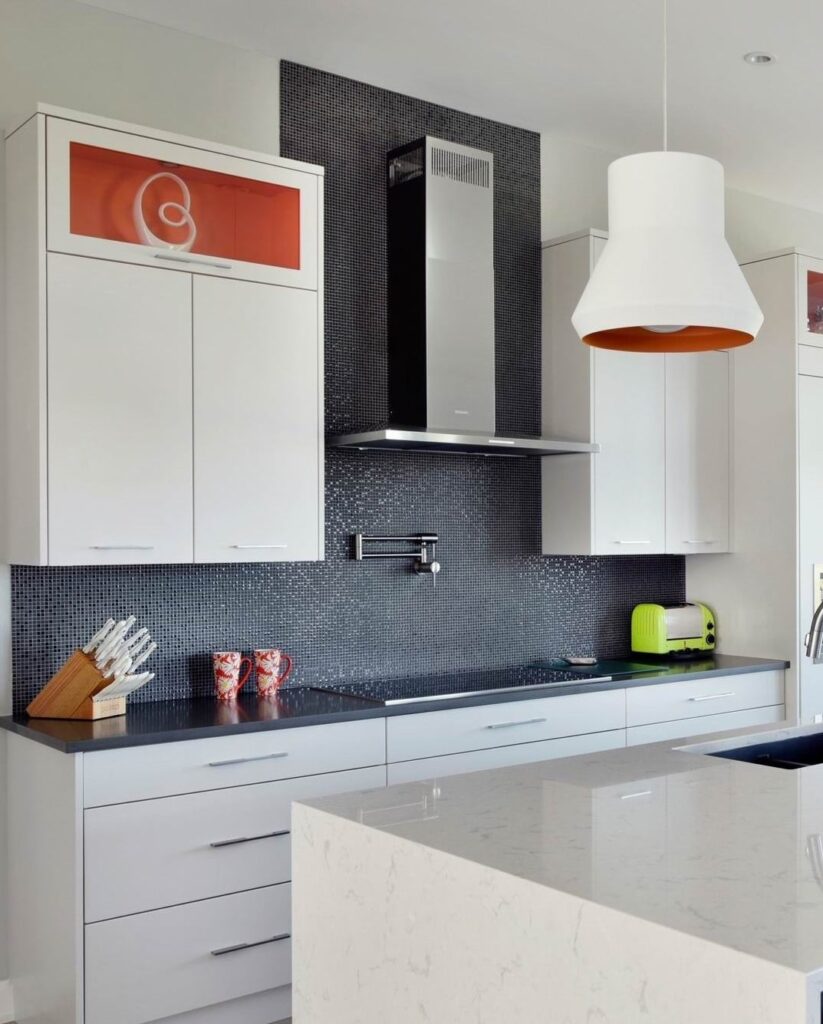 “Instead of having to be really bold with tile you can be a little more subtle and still really catch the eye,” says Mark Kranenburg of Greenmark Builders, who built the bungalow and is a fan of all the metallics out there now.

He also used it to help accentuate the emphasis on lighting in the kitchen of a custom home that won at the Housing Design Awards. And a stunning home he’s entering in this year’s awards features an eye-catching metallic backsplash in a herringbone pattern.

“That’s a blingy house so it was appropriate,” he says. “It comes down to the client.” 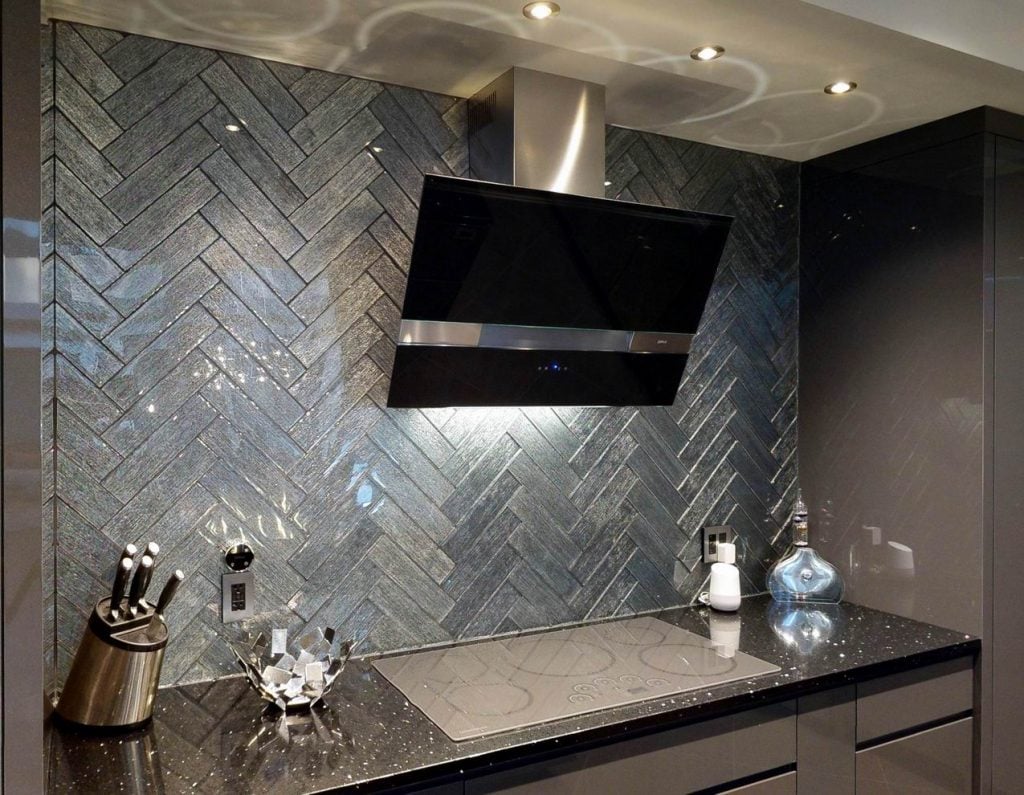 It’s nice to have something that grabs your eye without being too heavy, says Mark Kranenburg of Greenmark Builders, who used a metallic herringbone backsplash in a ‘blingy house’ that he’ll be entering in this year’s Housing Design Awards.

In the case of builders Urbandale, Richcraft, Glenview and Phoenix — who all used metallic tile in recent model homes — there was no specific client, but there was a certain look being sought.

“I wanted something that would be memorable and that would add just a touch of glamour or add that sense of luxury,” says Urbandale design consultant Francesca Osso, who chose a glossy gold hexagon for the backsplash in the all-white kitchen of Urbandale’s Atlantis II model at Bradley Commons in Stittsville. 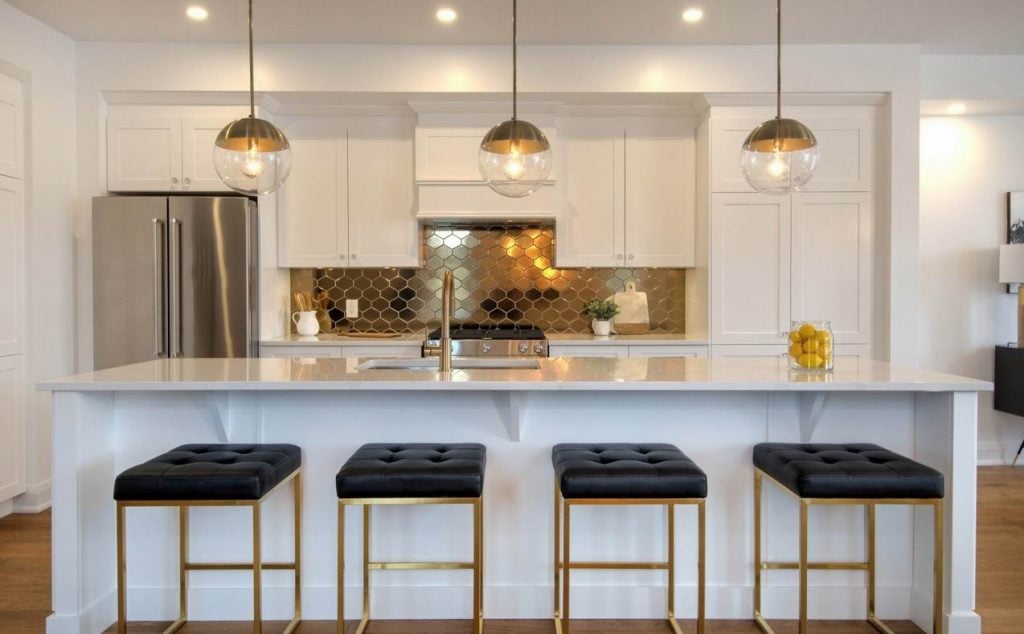 A glossy gold hexagon backsplash brings a memorable pop of colour to the all-white kitchen of Urbandale’s Atlantis II model.

Buyers refer to it as the gold backsplash house, she says. “It’s something they all remember, whether they like it or they don’t like it, they remember that house.”

She’s had several buyers try to recreate the kitchen for themselves or else use that tile (Benzene series, Centura Tile) somewhere else in their home.

Although he’s not personally a fan of metallic tile, Richcraft marketing manager Shawn Bellman chose a vertically stacked bronze mirror subway tile for the backsplash of the Hudson model at Pathways at Findlay Creek. 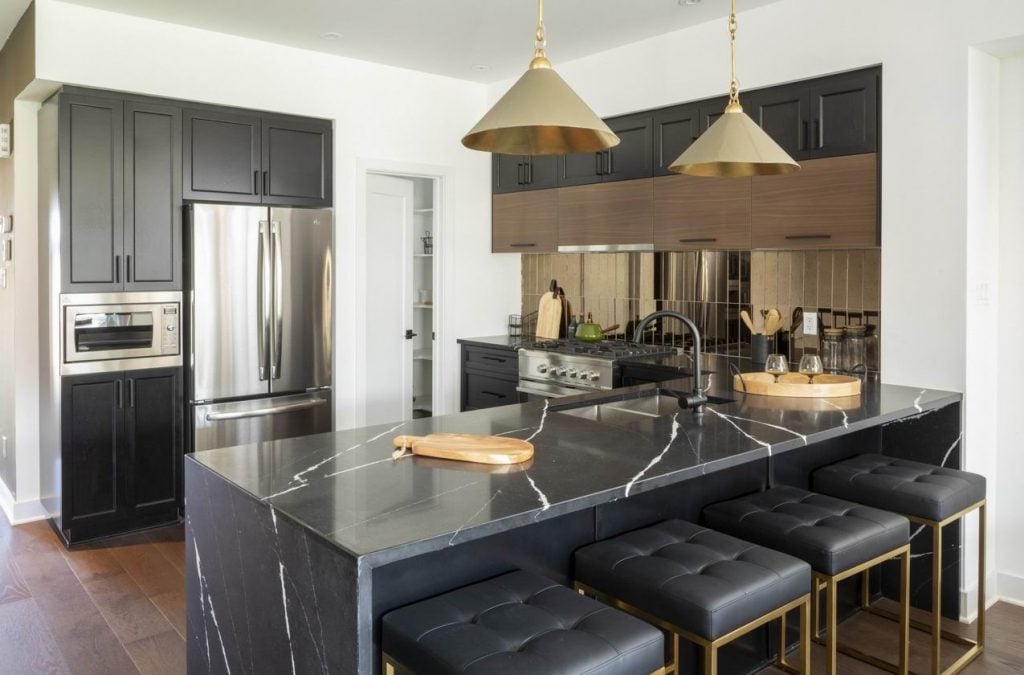 The moody townhome is filled with darker, masculine tones paired with warm metal accents and dressed up by creating focal points with black marble, bold tile, and a palette of deep and earthy colours.

In the case of metallic tile, “it can add light, space and bling to an area,” he says. “You have to be open to new ideas.” 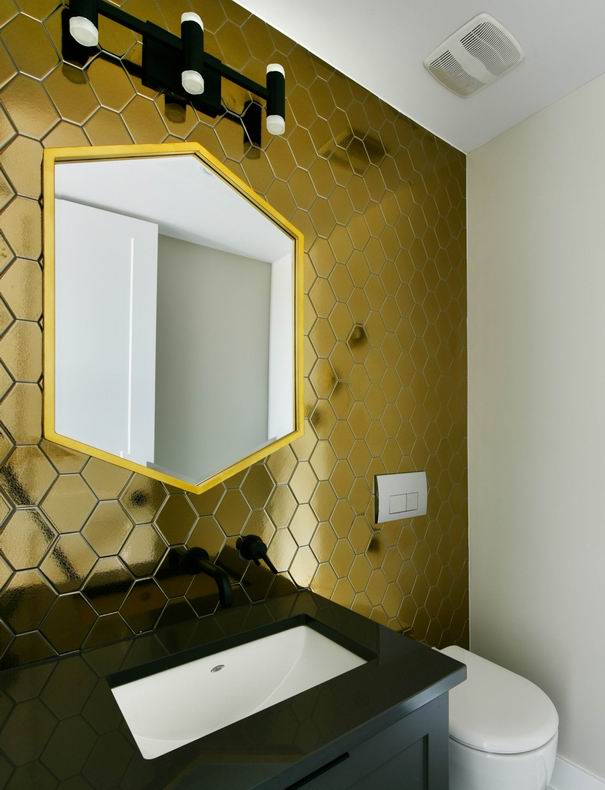 A powder room is an easy place to create a big impact with tile without being overwhelming. Shown is the powder room of Phoenix’s Klondike model. Photo: Gordon King Photography

Besides kitchen backsplashes, a popular spot for taking a risk with tile is powder rooms, where you can go for the big impact on a small scale, says Phoenix Homes’ vice-president of operations, Rahul Kochar, who chose metallic-looking tiles for both powder rooms of the company’s Income Series Klondike model at Pathways at Findlay Creek.

“They are used in spaces where you want to have a large impact, but the application isn’t so large that their big impact becomes overwhelming.” 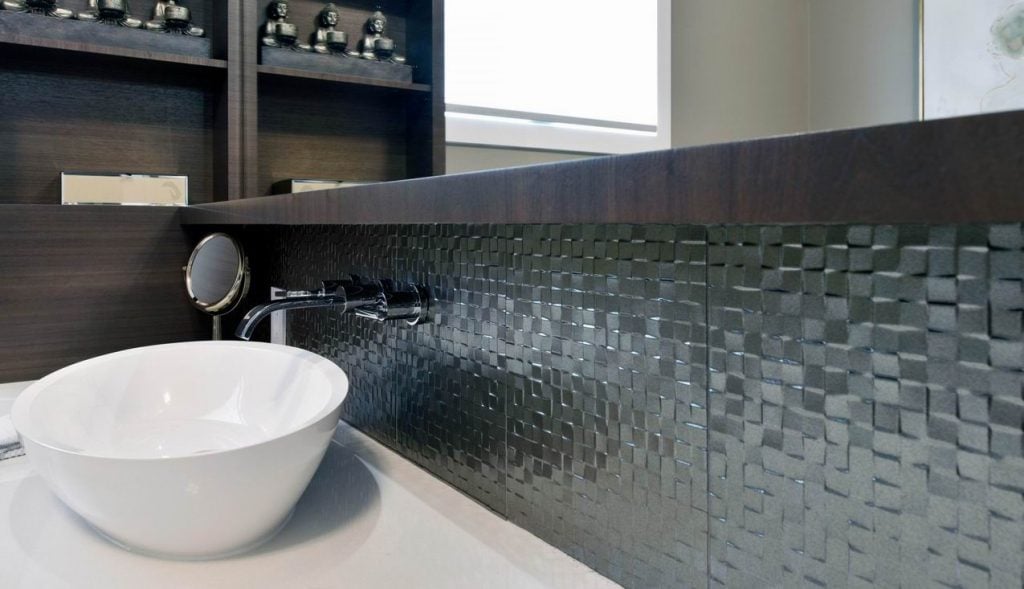 Subtle yet effective, the backsplash of this Potvin Construction ensuite adds a glossy touch that helps reflect light in a room with only a small window. It’s a porcelain tile, now discontinued, from Touch of Distinction. Photo: Gordon King Photography

And not going overboard is key, says MacPherson. “If you do then you’re trying too hard and it doesn’t look nice… Look at our wardrobes — you can pick out a really nice pair of earrings that have a little bit of bling and everything else can be very simple…

“But bottom line, if it works with the design and the client, then use it… And try keeping it as classic as possible so that the spaces don’t look like you’re tagged in a specific era or year.”

10 creative ways to use tile