ADVERTISEMENT
»New Homes»Articles»The bonus of built-ins: 13 projects to inspire you

The bonus of built-ins: 13 projects to inspire you 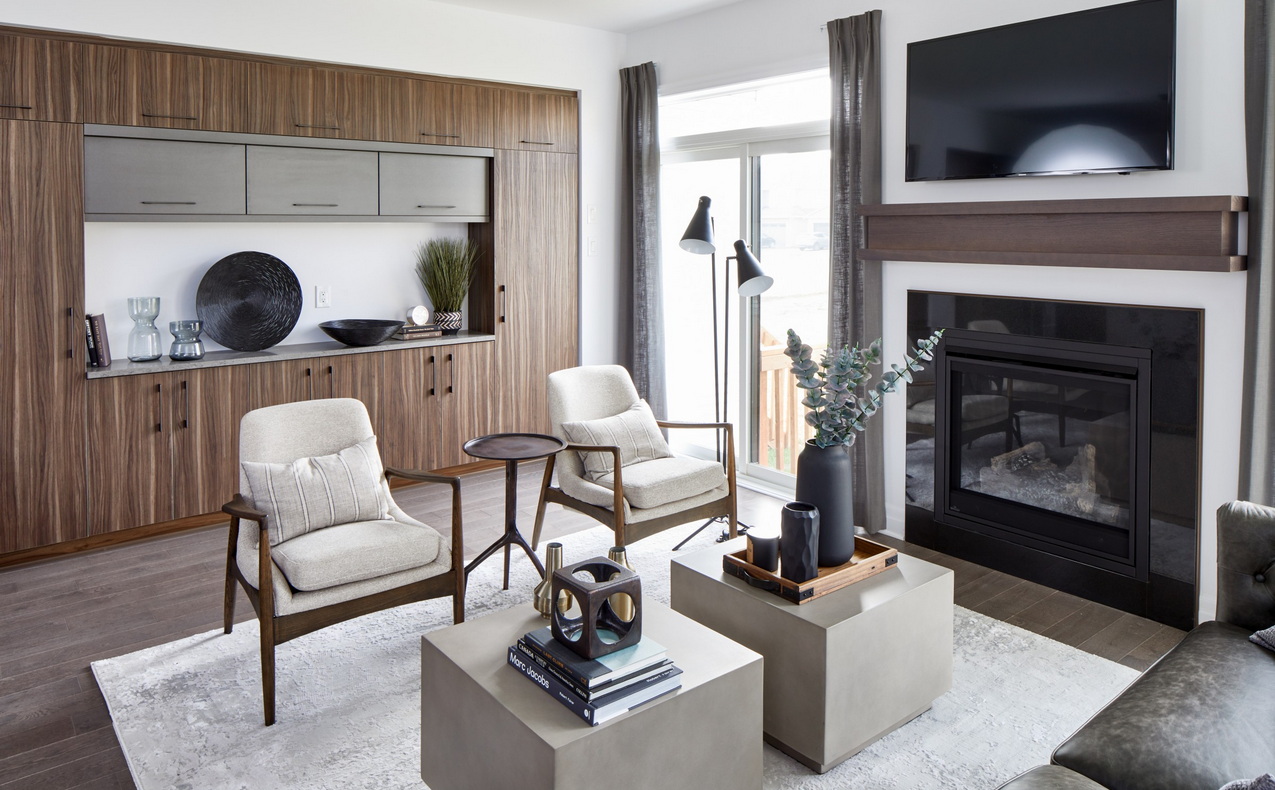 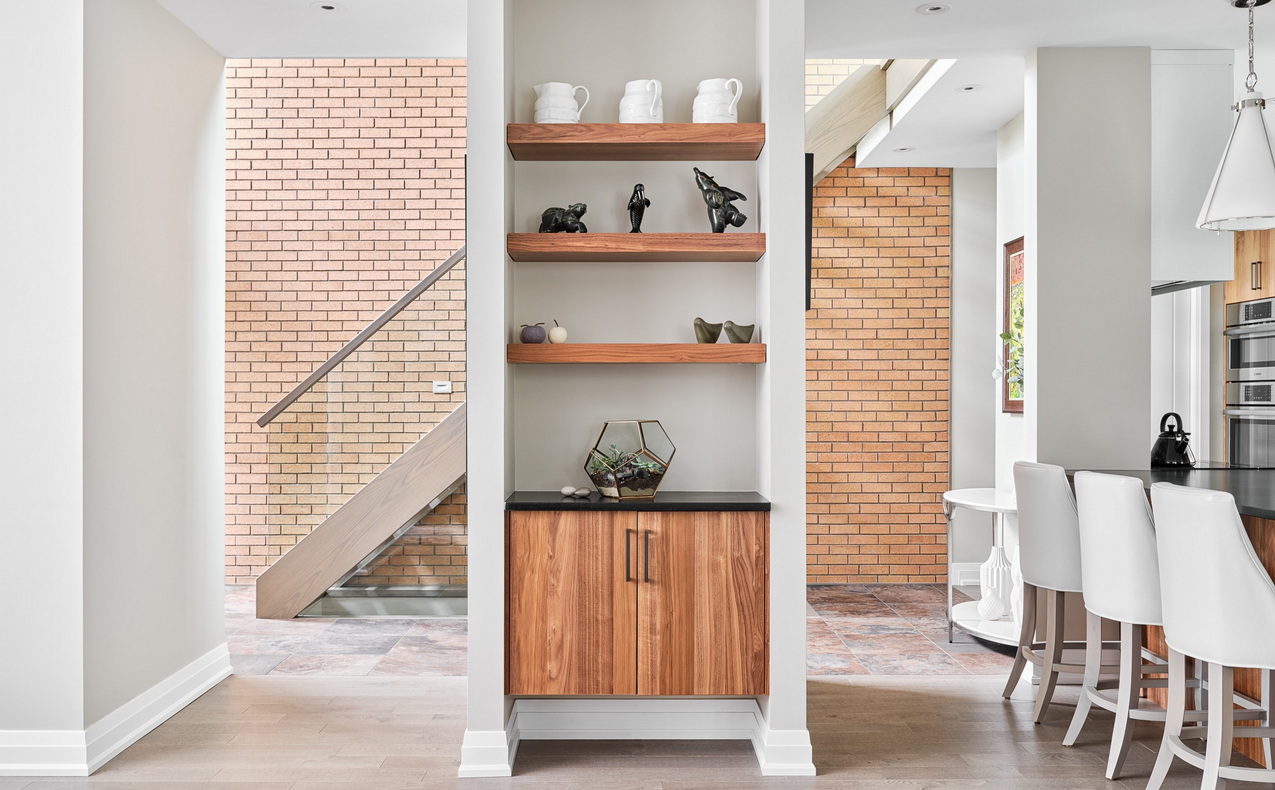 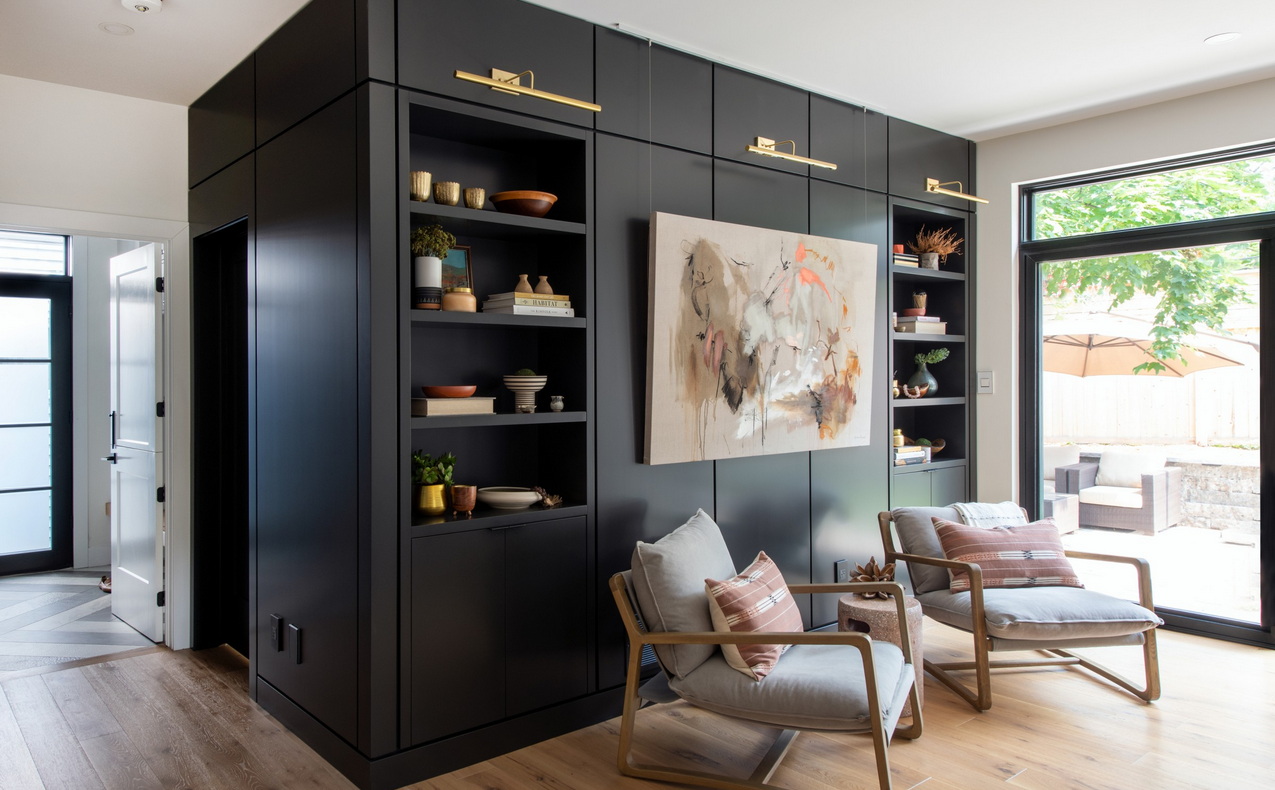 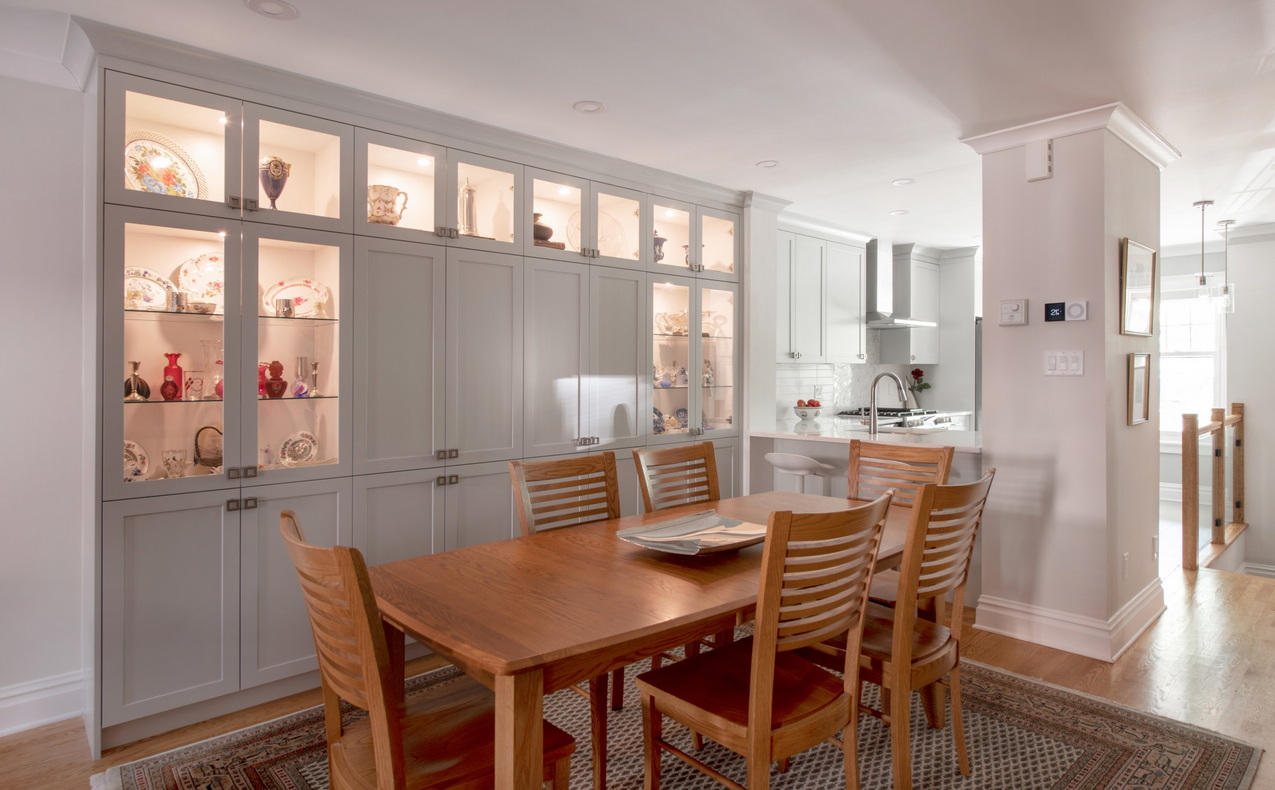 Photo credit: Miv Photography
Rift-cut cabinets with a large cut-out for display items create a custom look and smooth transition between the kitchen and living room in the Kenora model by Richcraft Homes.
Photo credit: JVLphoto.com
A shelving wall divides the living room and front entry to visually separate the spaces while keeping them connected in this custom home by Rosaline J. Hill Architect & Haslett Construction.
Photo credit: Gordon King Photography
In this custom home by Gordon Weima Design Builder, the unique built-in draws you into the space and entices the eye.
Photo credit: Gordon King Photography
Replacing a hutch with visually appealing built-ins ties the kitchen and dining room together while providing both storage and display space in this renovation by Amsted Design-Build.

When done right, built-ins can be a popular addition to your home that brings value, excellent storage space and a welcoming layer for visual interest.

They contain the clutter, provide handy display space and create a custom feel, even in a production home.

“Built-ins provide unique design elements that when executed correctly achieve a balance of functionality and esthetic, be it a niche for a particular piece of art or something more robust for a beloved book collection,” says Rob Haslett of Haslett Construction.

“Built-ins add an elegant, quiet sophistication to a space that also provide a bespoke feel to a home. In my mind, they also indicate another level of thought that has gone into maximizing a space and its functional efficiency.”

With increasing home and land costs, we are building smaller and smarter, adds architect Rosaline J. Hill. “And built-ins are great for that. A small space can work really well and function just as well — sometimes better — than a large space, if there’s a place for everything.”

Like many others in the industry, designer Caitlyn Blaney of RND Construction feels built-ins are growing in popularity. “They are a great addition to many rooms.”

Claridge Homes designer Kayla Pollock finds about half want them for esthetic reasons and half want them for functionality. She advises homeowners to “really consider what you will store in them prior to building… Figure out what you want to display. This will help determine the dimensions you need.”

While built-ins can add character, “they look out of place if they are not in the same style language as the house,” says Hill. “They work best if they are part of a unified architectural and interior design.”

Haslett doesn’t recommend having built-ins or niches simply for the sake of having them. When they have purpose and are executed within the overall architectural and interior design of the home, they have a greater chance of being successful from both a functional and esthetic perspective.

Of course, not everyone is a fan of built-ins. “Some people prefer to have their own personal piece of furniture in the space,” notes Shawn Bellman of Richcraft Homes, which incorporates built-ins into just about all its floor plans but offers them as options so those who don’t want them can opt out.

“Built-ins fall under the umbrella of permanency, which can be scary for some,” adds Patricia Liptak-Satov of OakWood, who is also seeing them grow in popularity.

They will add value, she says, but, like all cabinetry, they can be expensive. “Some clients will view the storage as priceless, where some will not want to break the bank for a few cabinets.”

The cost can vary dramatically, says Haslett, from a simple and economical drywalled niche to pricey custom cabinetry with lighting. “There are many ways to achieve the bespoke feeling of built-ins with the first step being to determine what the function is. From there the design will take on a life of its own with a balance being achieved between form, function and cost.”

If you’re thinking of built-ins for your home, here’s a baker’s dozen of examples from last year’s Housing Design Awards to inspire you. 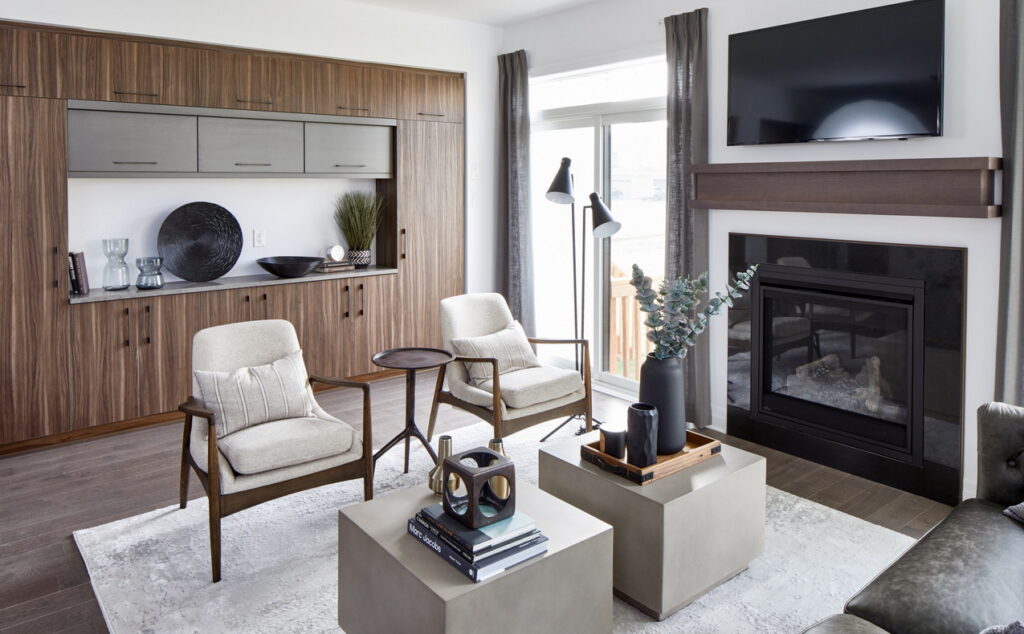 More on the Kenora 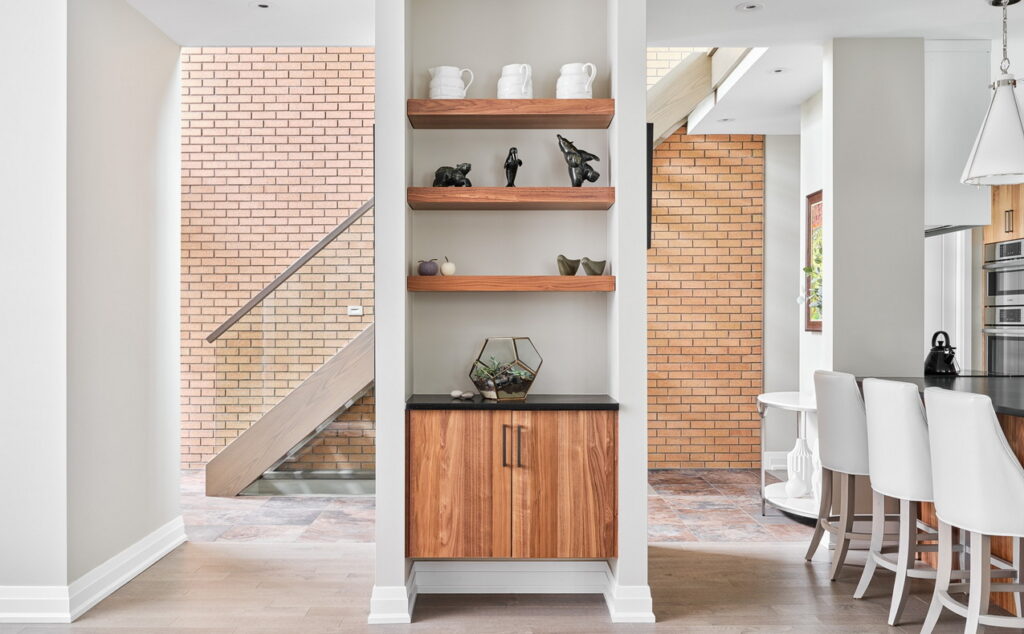 This ground-floor space is a hybrid of open-concept and defined rooms, says Hill. The shelving wall divides the living room from the entry area so that they feel like separate rooms, but leaves views through to the sunlight falling on the brick and stairs behind. “The built-ins add character and functionality to the living room, but also are part of this visual layering of spaces.” 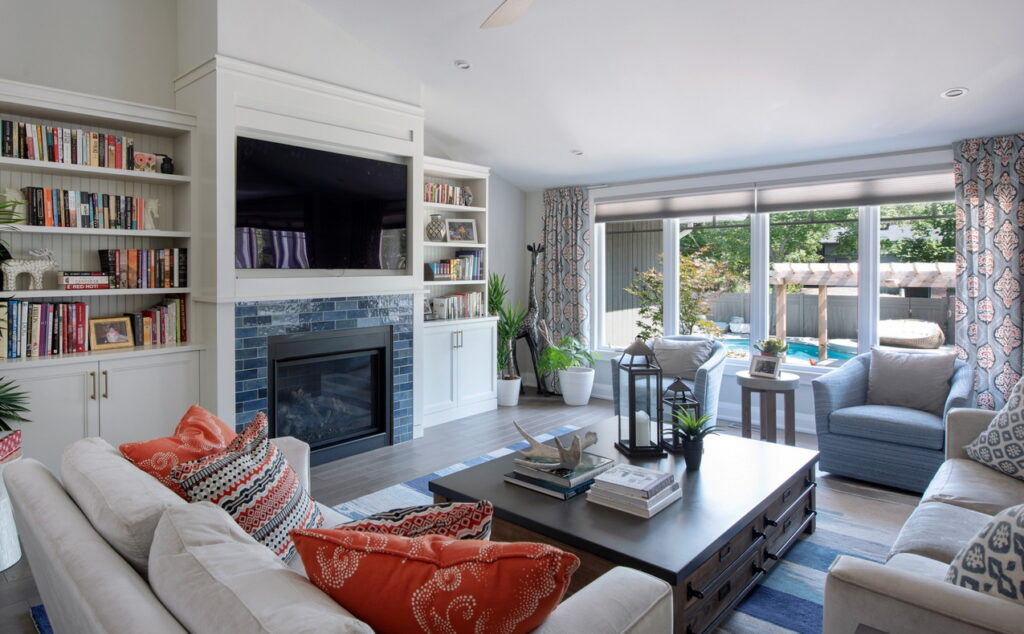 Part of a whole-home renovation for a family with four children, the living room built-ins, with their storage for books, games and TV equipment, create an inviting living space for the large family to gather. “With multiple purposes, the family is encouraged to spend time in this space together, while being easily tidied when the time comes,” says Amsted’s Stephanie Fahey. 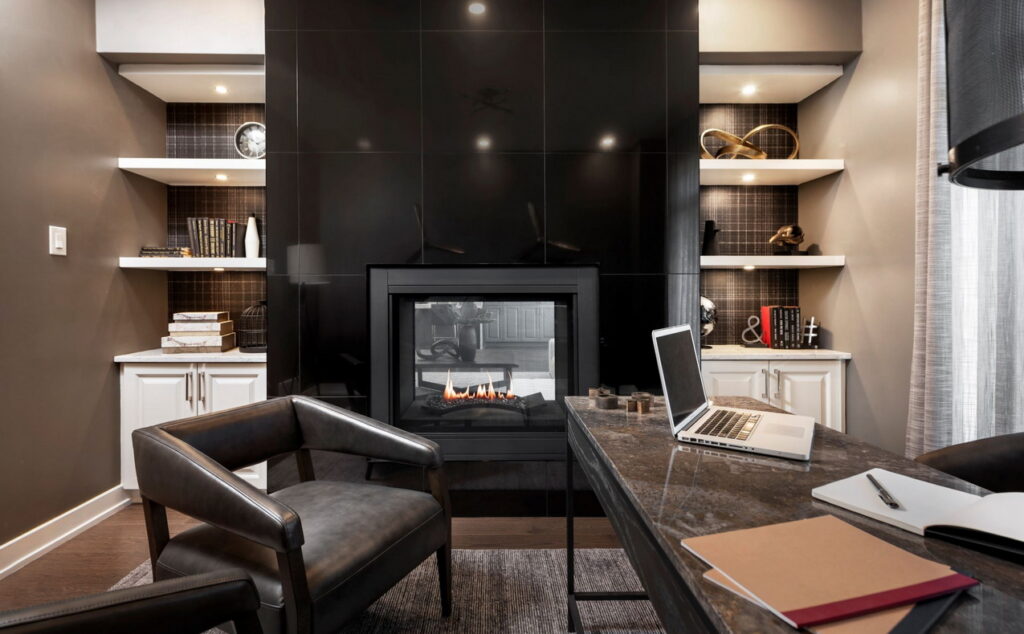 “We included built-ins in this office because the fireplace was in the centre of the room and the niches on either side of the fireplace made it the perfect fit for two matching built-ins,” says designer Kayla Pollock. “It creates a symmetrical focal point in the room and serves as a functional space for hidden storage.”

More on the Lockport II 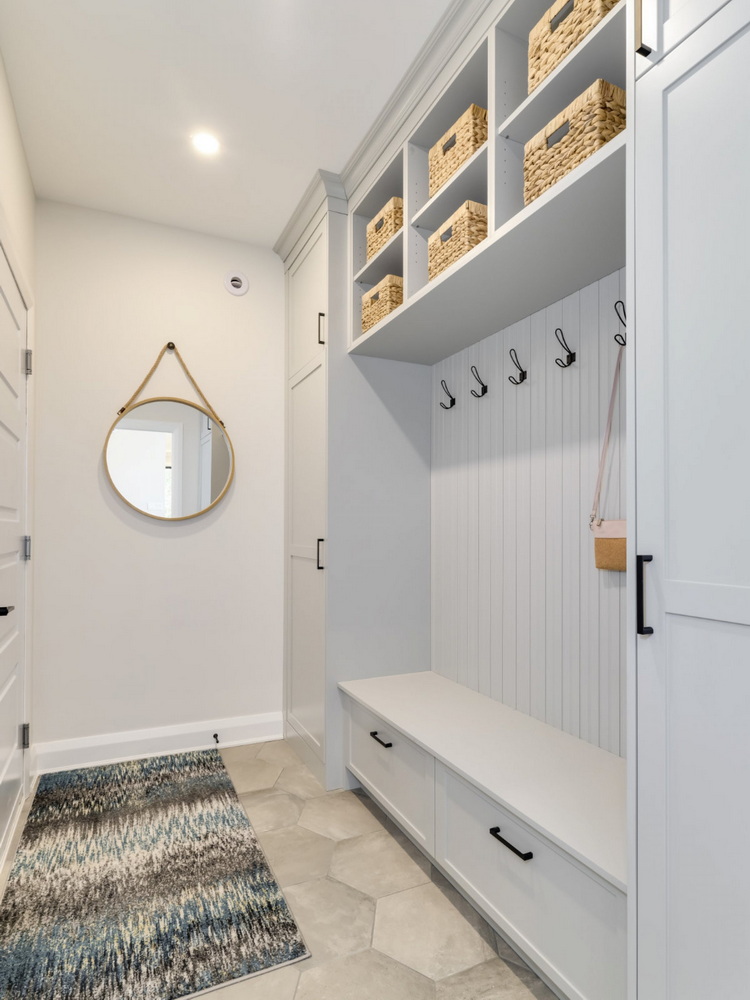 Instead of doing traditional framed closets with bifold or sliding doors, this mudroom was designed with built-in cabinetry to maximize the storage and use of the space, says chief operating officer Patricia Liptak-Satov, giving the homeowner a bench for getting ready and taking advantage of the tall ceiling height. 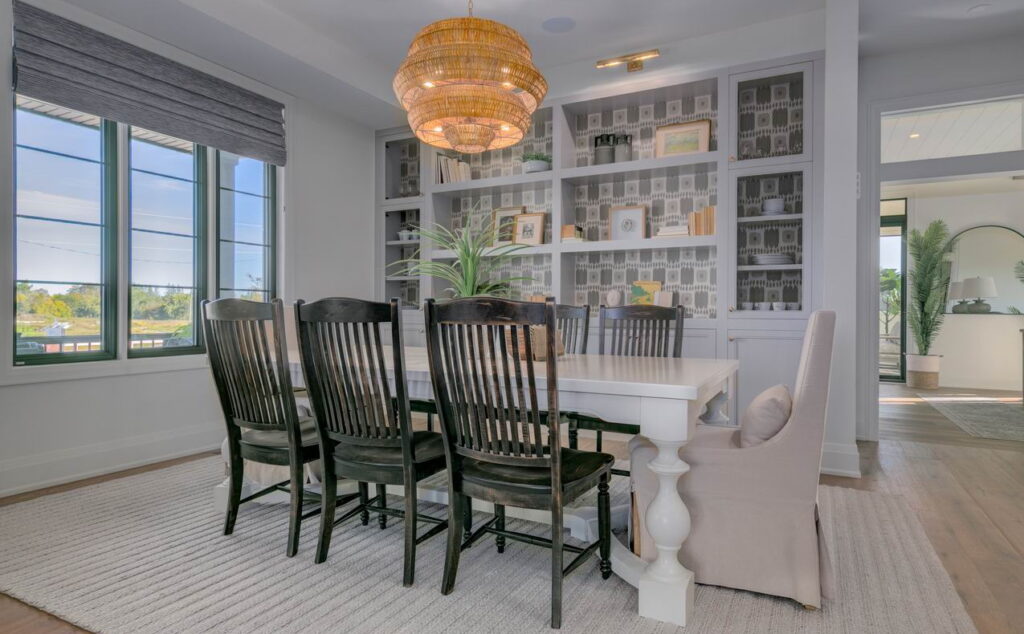 The dining room nook was originally planned for a sideboard, but designer Tanya Collins insisted on a built-in for versatility. In an interview as the home was being finished, she said, “It just gives you a lot of storage potential, which is always something people want (and) so that the office kind of moves into this space,” like a boardroom for those working from home. “And it also gives you that library/dining room/multi-purpose effect.” She added wallpaper behind the shelves to give it more pattern and texture. 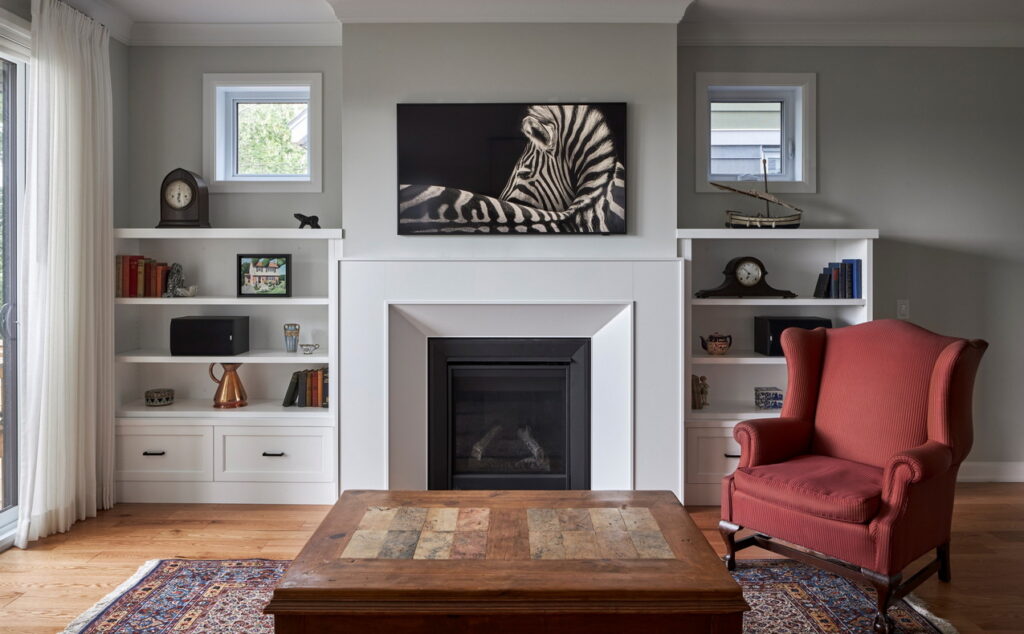 Flanking a fireplace is a common use for built-ins. In this case, the homeowners wanted built-ins to display their favourite personal items, says RND designer Caitlyn Blaney. “These built-ins enhance the space by creating an anchor point for the room, especially with the open concept of this home.” 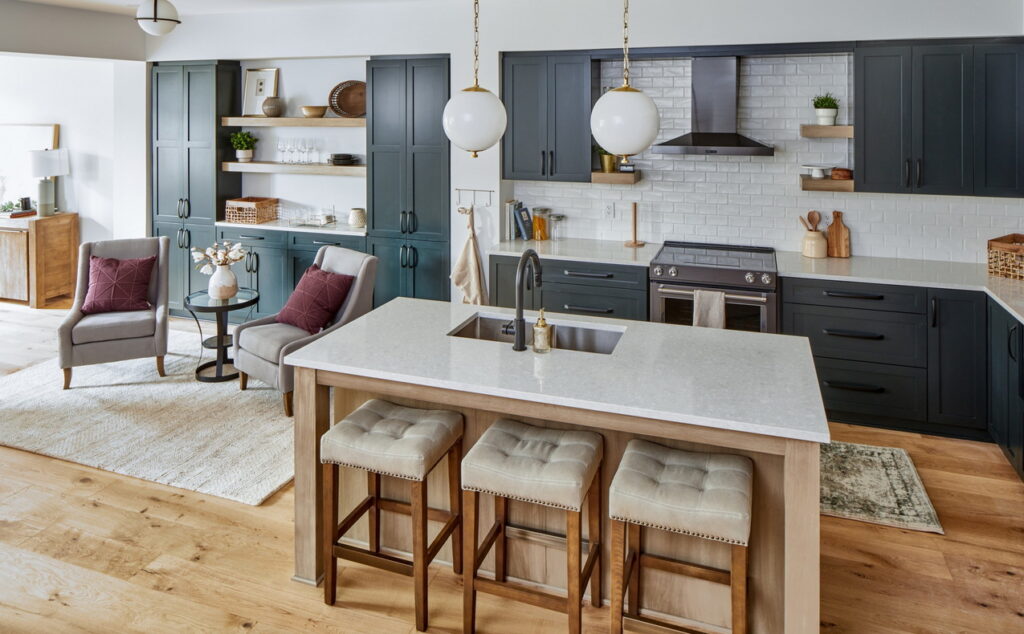 The extended pantry provides ample storage and an opportunity to display carefully selected pieces and home accents to create a cohesive design and a cosy sitting area. In this case, the pantry goes beyond a simple wall of cabinets, adding interest by being framed into a niche and incorporating a counter and open shelving.

More on the Fairhaven 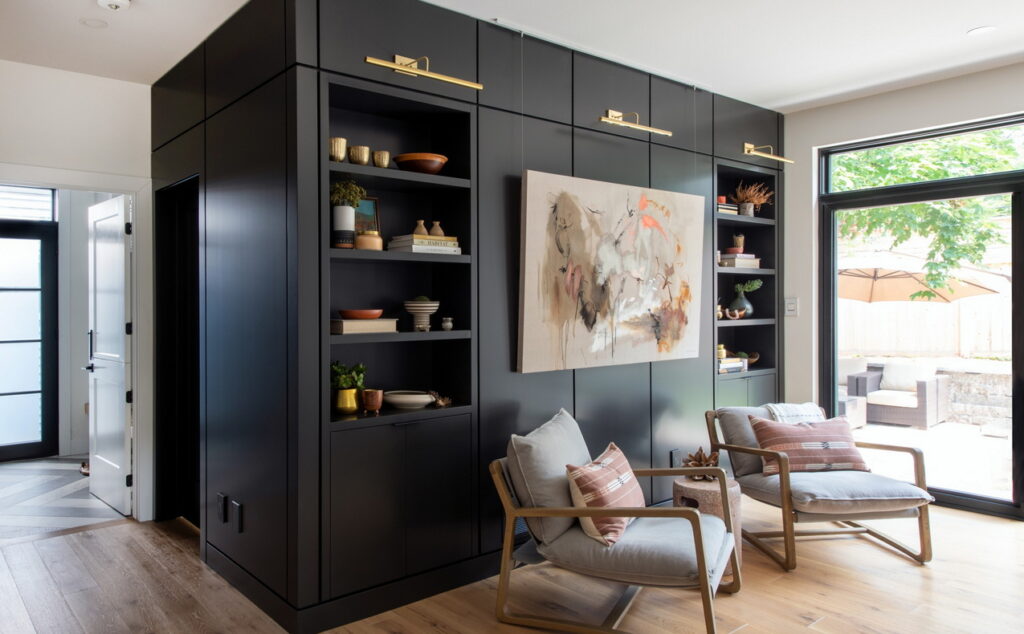 New homes tend to have very little storage space, which is usually a high demand for growing families, says Weima. The unique nature of these built-ins draws you into the space, “enticing the eye, almost like a treasure hunt to see what is there.” Darker tones were used to balance and offset the large kitchen island that’s nearby in the open-concept space. 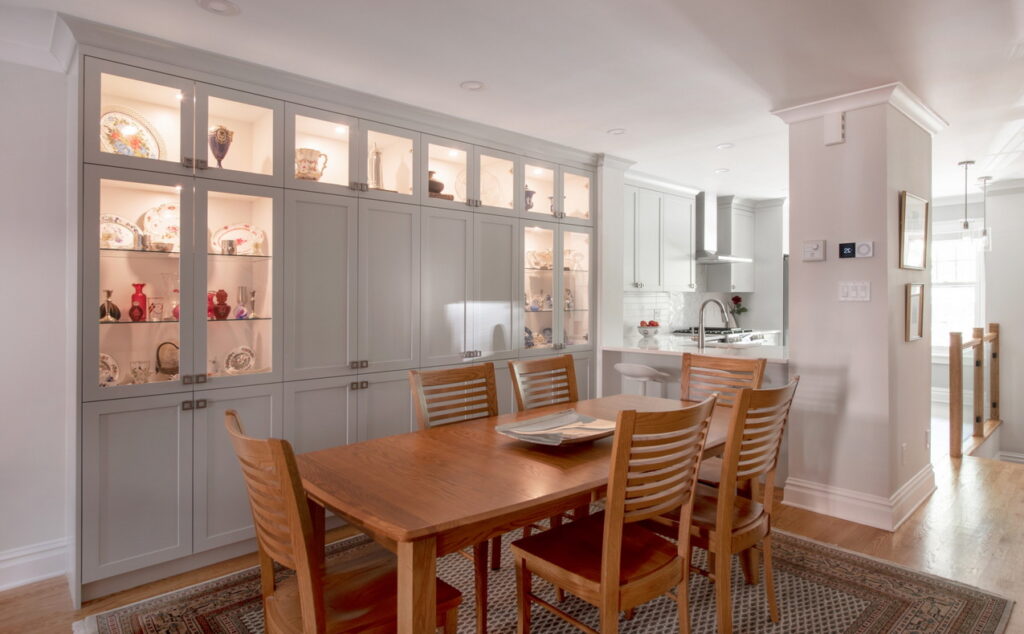 The homeowners wanted a space to display their serving ware and other collectibles in their dining room. “They had a large hutch here previously but, when redoing the kitchen, they sought to extend the look and feel of the space by using built-ins that would tie the kitchen and dining room together,” says Fahey. “The rooms now feel cohesive, while simultaneously achieving the storage and display they were after.” 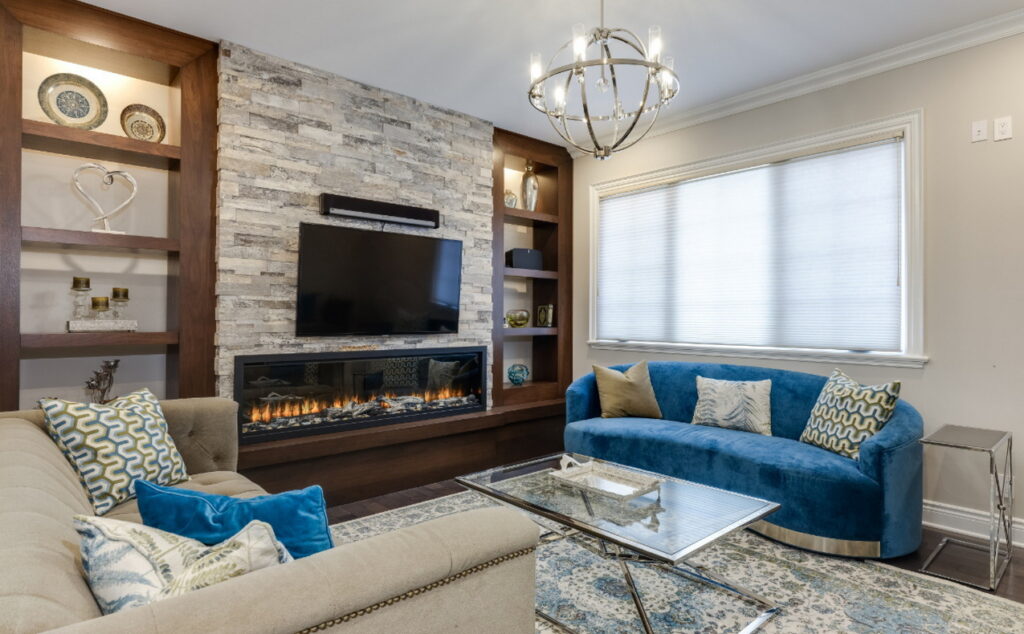 Built-ins were added to this family room to add warmth and a natural wood accent, says Liptak-Satov. Their darker colour allows the fireplace’s stone veneer to stand out, while cabinet lighting highlights display items. “The built-ins are a great area for the client to personalize the space with their own artwork, family photos and/or decor items.” 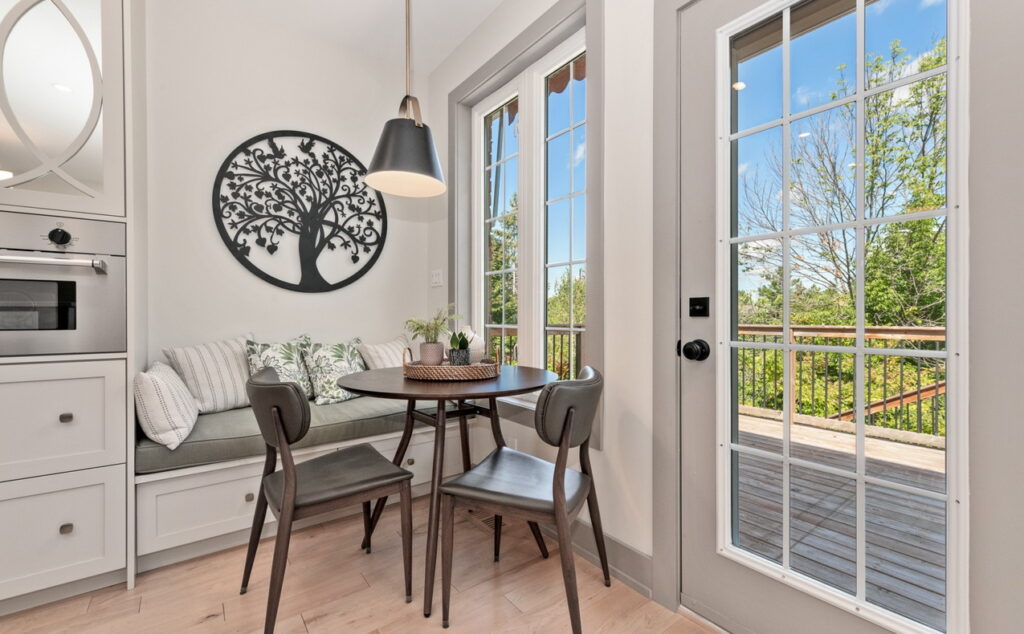 Built-ins aren’t just cabinets and shelving. In this example, a cushioned built-in bench by a large window overlooking the golf course is a favourite spot for morning coffee. It also serves to add extra seating without taking up additional floor space and it offers storage with two pull-out drawers, notes Remarkable owner Mark Ostapyk. 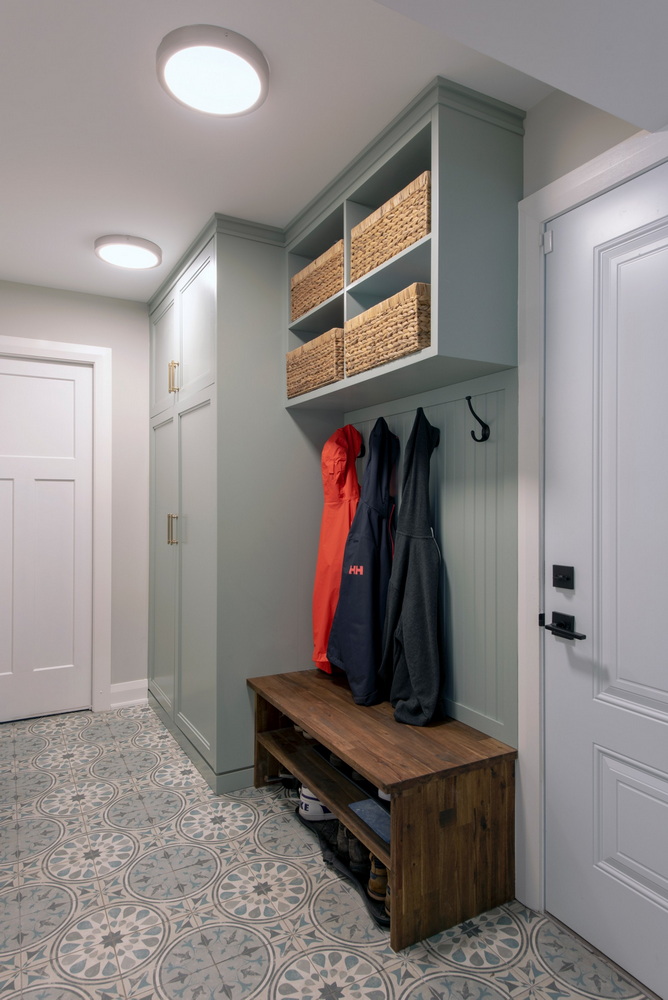 For a multi-generational family with four children, built-ins are a functional necessity, says Fahey. In the mudroom, the shelves with baskets provide distinct spaces for each child’s items, and the large integrated closet neatly hides all their outdoor gear.