ADVERTISEMENT
»New Homes»Articles»Tour the EdenWylde models, even if it’s virtual

Tour the EdenWylde models, even if it’s virtual 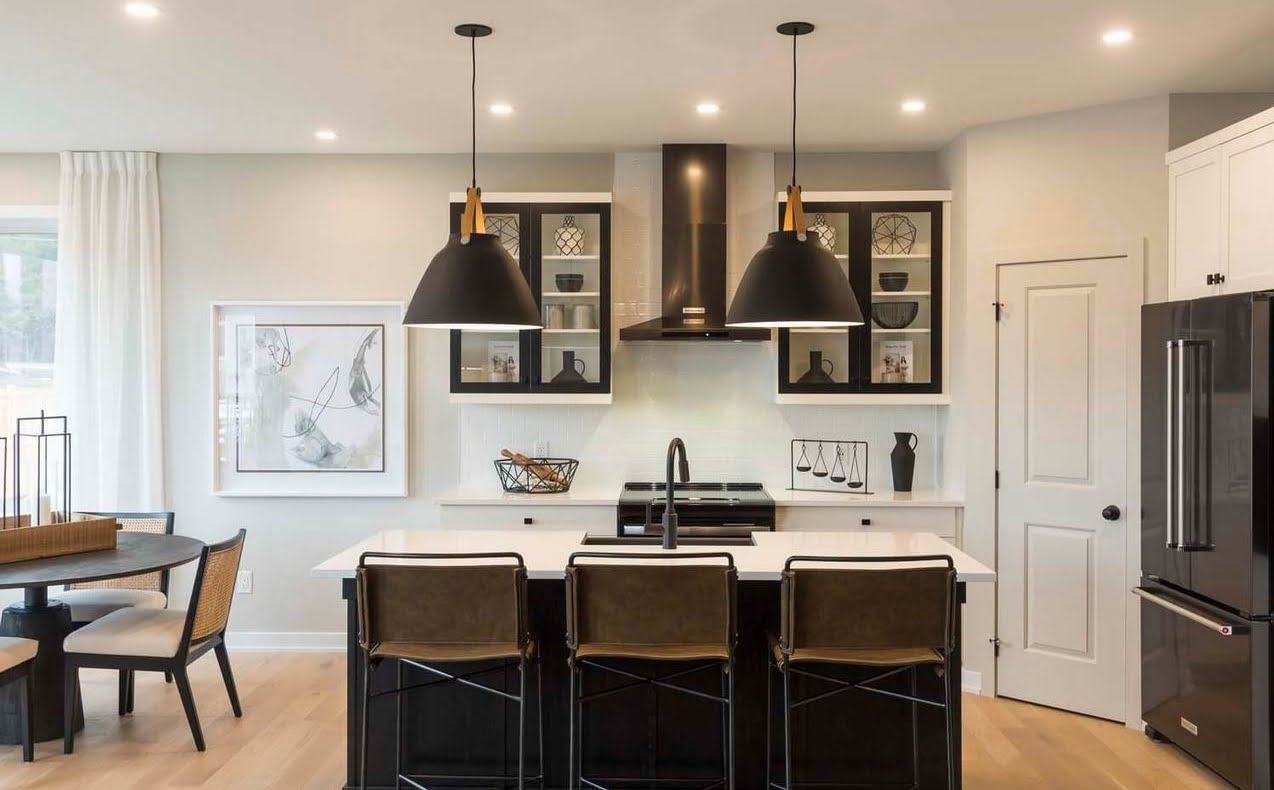 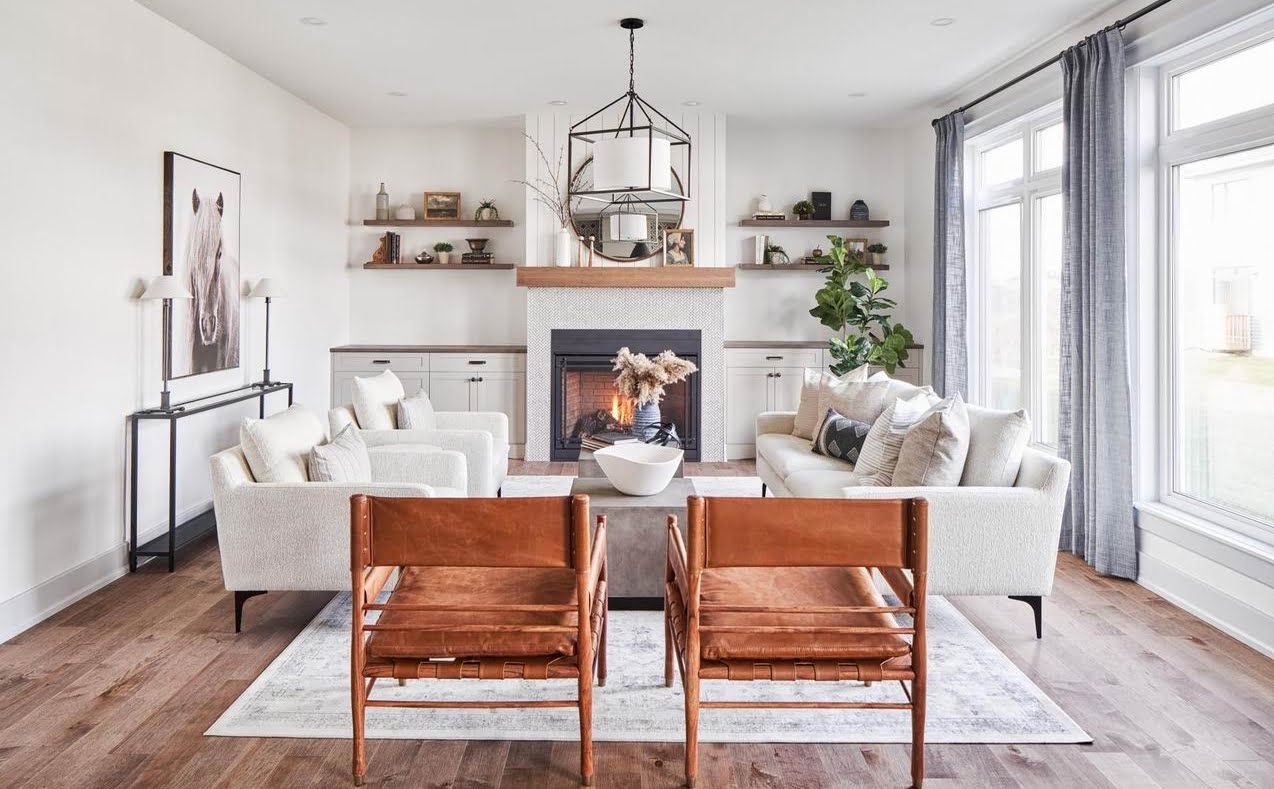 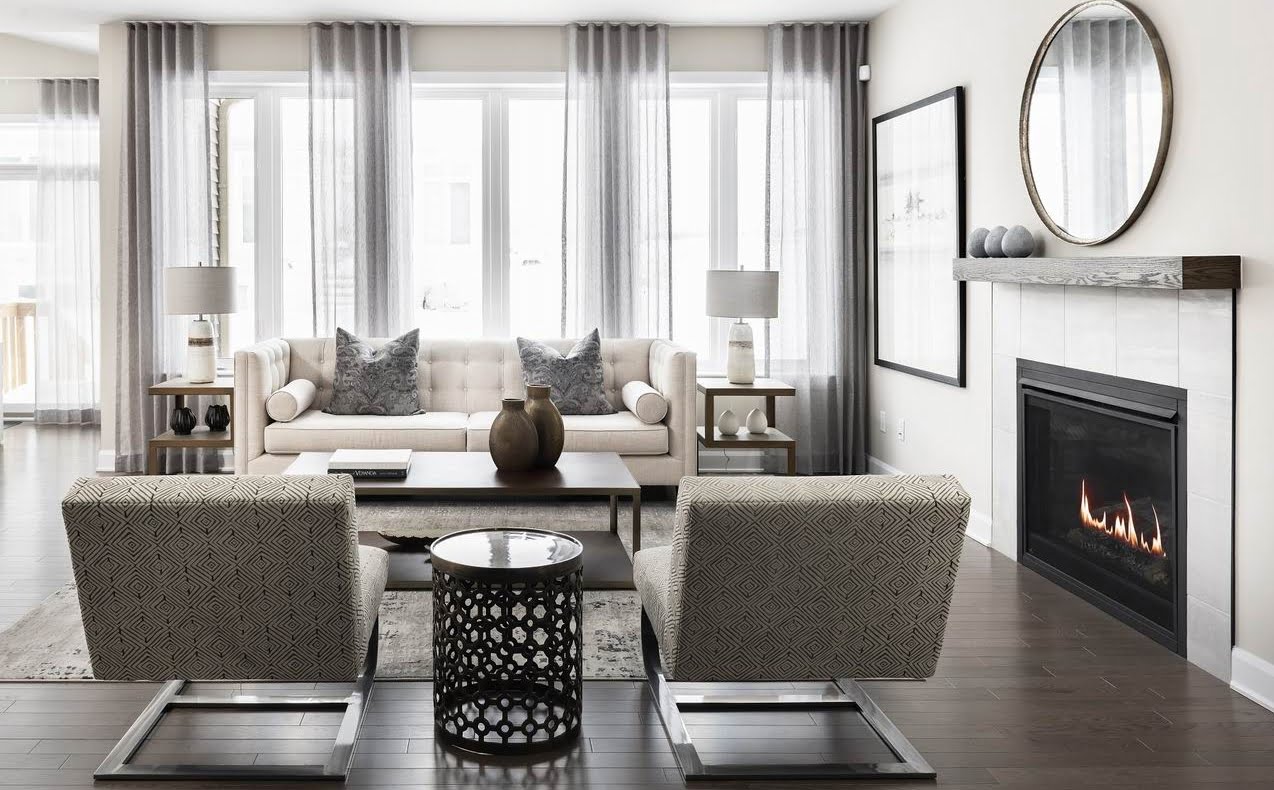 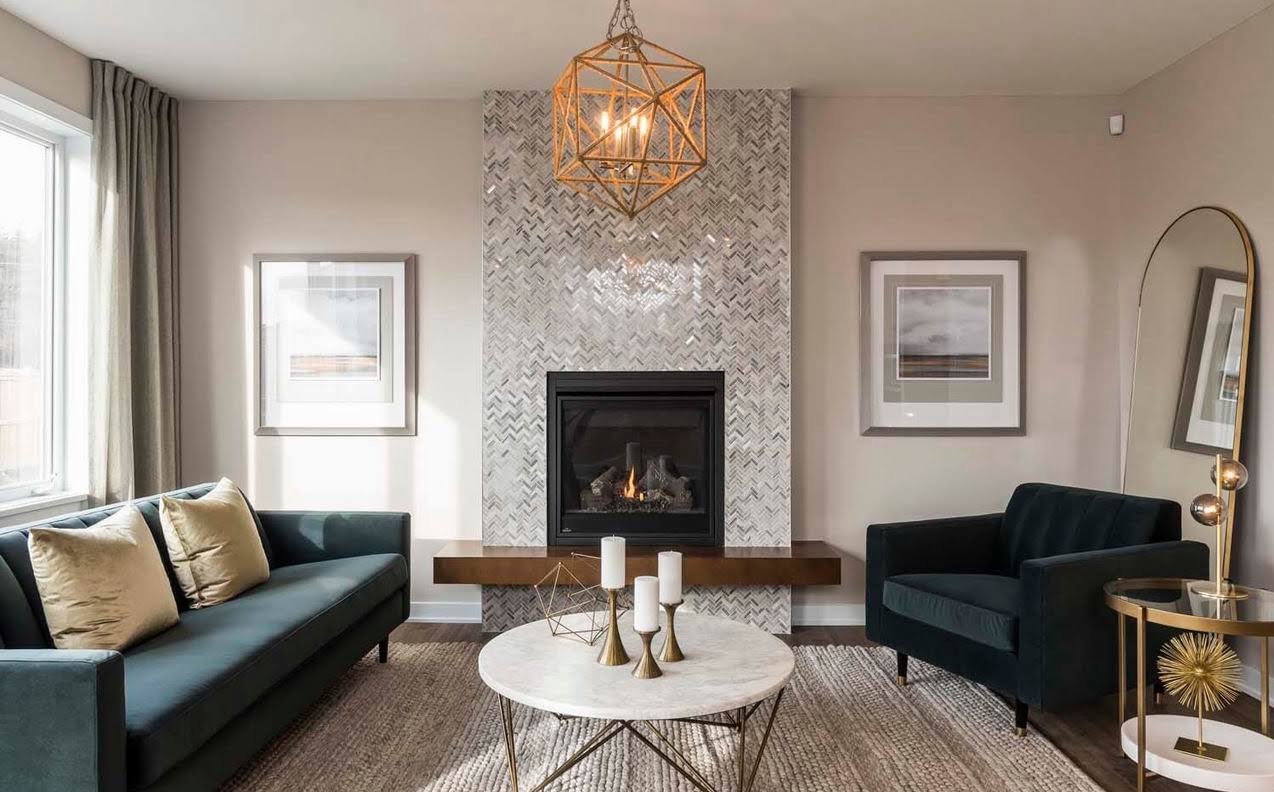 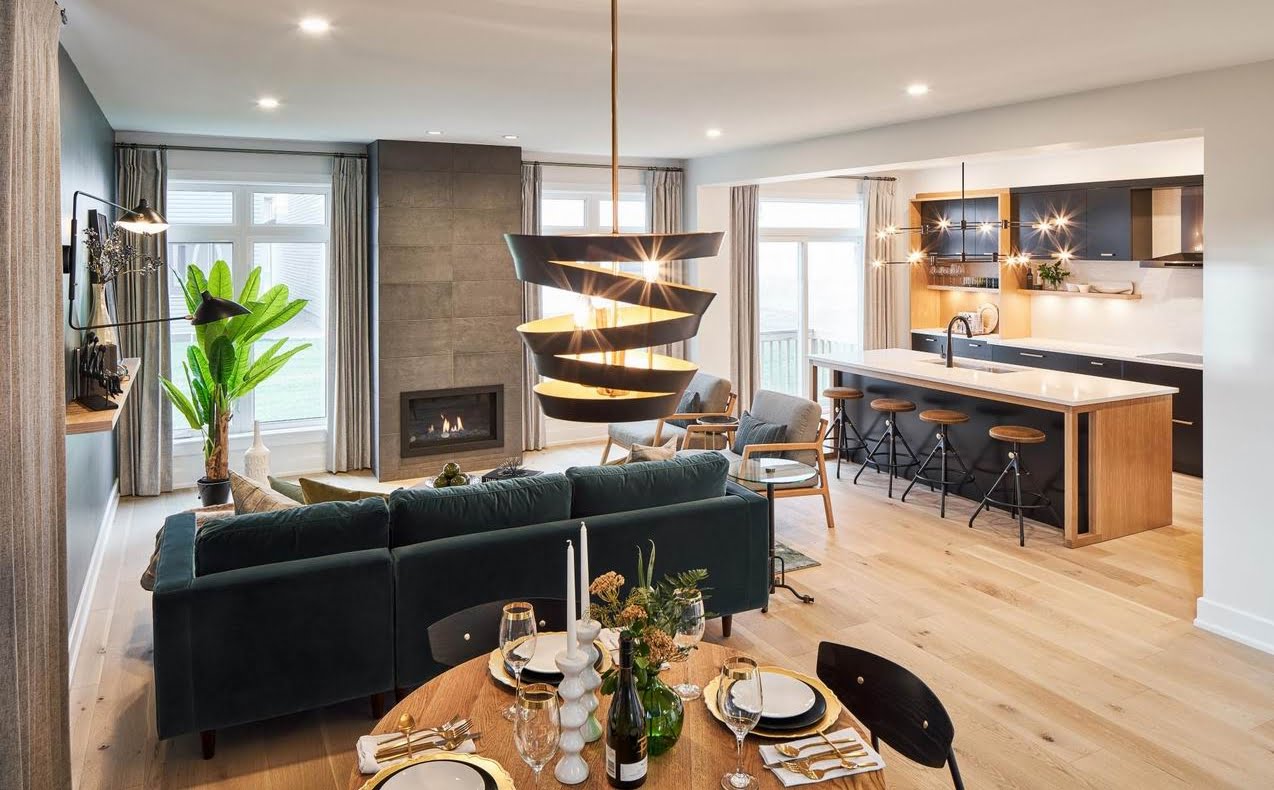 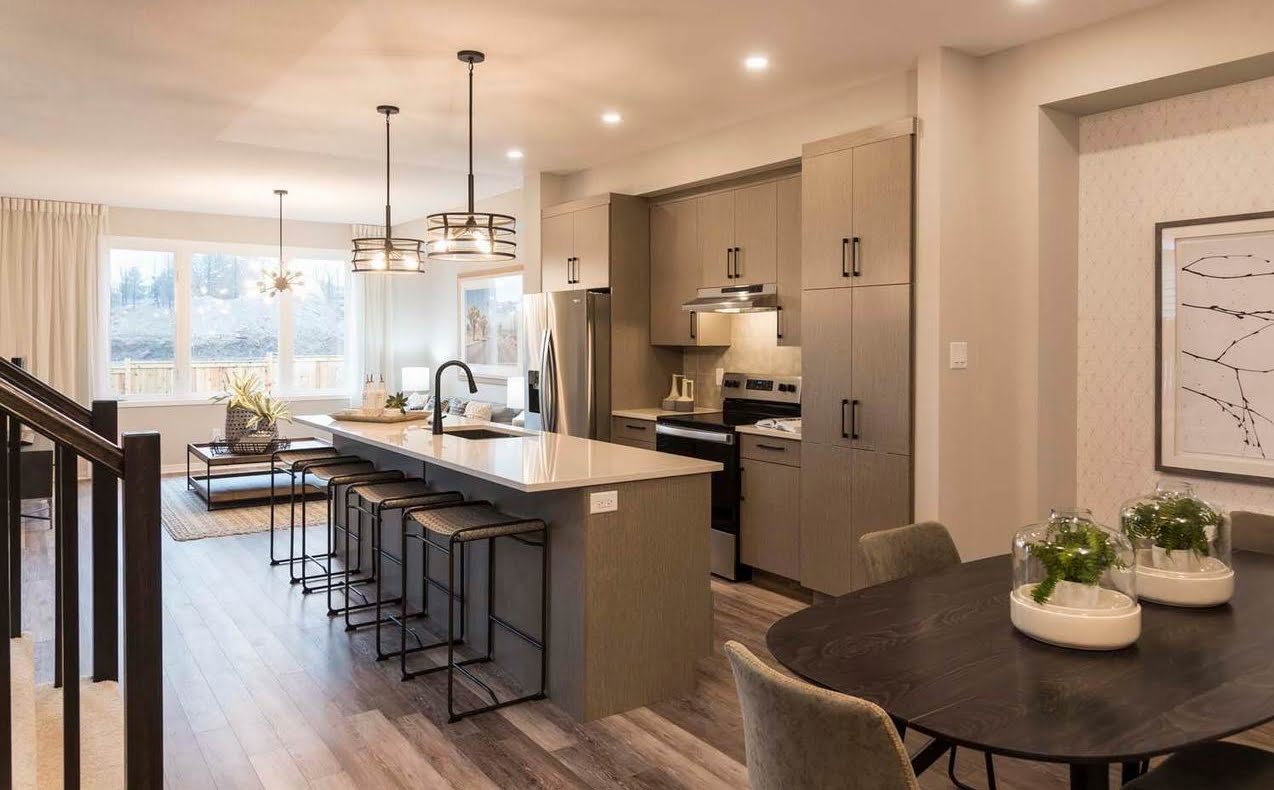 The pandemic may be keeping buyers from touring designer-decorated model homes in person as much as they’d like, but it’s not stopping builders from building those models. Several are under construction across the city and a handful were recently finished at the Stittsville community of EdenWylde:

Although in-person visits may not be possible as we shift in and out of lockdowns, there are photo galleries, video tours and 3D walk-throughs to let you visit virtually.

The homes are a mix of styles and designs, from modern farmhouse to contemporary and soft neutrals to bold uses of black and blue, plus one that shows you what the home looks like when it’s built with no upgrades. Here’s a look.

Cardel has built two singles — one of its smaller floor plans (the Auden) and one of its larger (the Paloma) — as well as its largest townhome (the Alder). Interestingly, the townhome has about the same square footage as the larger single, with both hovering around 2,235 square feet. 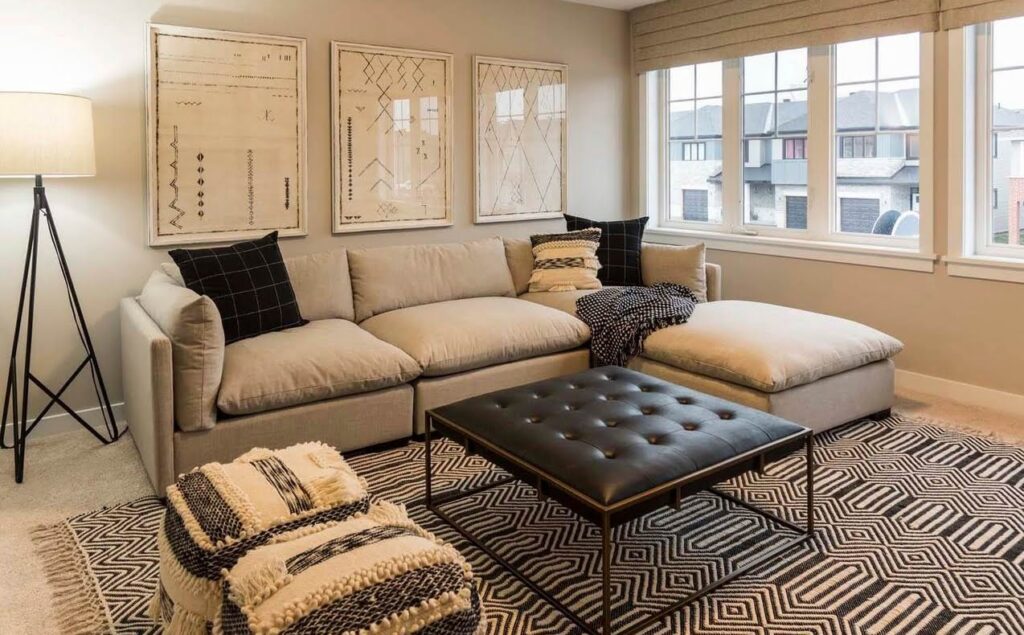 A feature of many of Cardel’s homes is a second-floor bonus room, like the one in the Paloma. Photo: Dwayne Brown Studio

The Paloma boasts a black-and-white kitchen and generous amounts of black accents elsewhere throughout the home.

“I so look forward to showing this home to everyone,” says sales representative Dale Laurie. “This is probably one of the floor plans that offers the most structural changes (as options).”

Without any options the three-bedroom home comes with 2,233 square feet and sits on a 34-foot lot. With options, windows can be added, rooms can be bumped out, the dining room can become a main-floor bedroom, the upstairs bonus room can also become a bedroom, the basement can fit a rec room, bedroom and bathroom, the master ensuite can be reconfigured and more.

The dining-room-turned bedroom in particular has been popular, Laurie says, with about half of buyers who choose the Paloma opting for the main-floor bedroom. They either have parents with them or want the option for when parents come to visit.

Turning the second-floor bonus room into a fourth bedroom is also a popular option, Laurie says.

Both the Paloma and the next-door Auden are among Cardel’s top three sellers at EdenWylde. 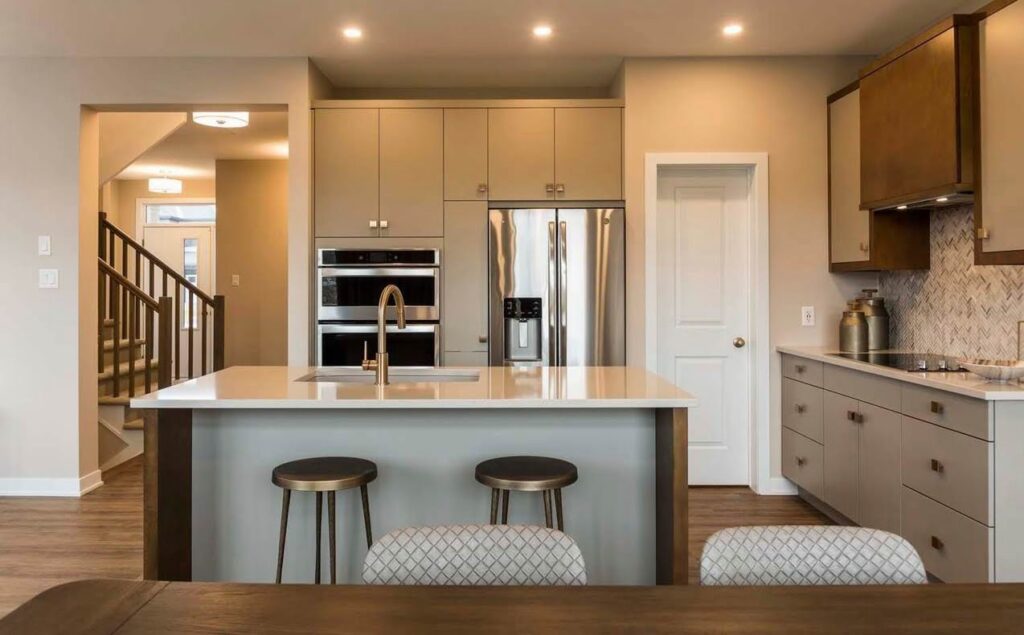 The Auden single by Cardel Homes features a walk-through pantry that connects the kitchen to the mudroom. Photo: Dwayne Brown Studio

Although the Auden is smaller at 1,964 square feet, the optional finished basement rec room adds space and the open-concept kitchen and family room feels roomy, particularly with the patio door extended from the standard six feet to eight.

“I’m finding that people are concerned more about windows on the main floor than they are on the second floor because this is where they live,” says Laurie.

And the mudroom connected to the walk-through pantry into the kitchen is oh-so-convenient.

In the model, the upstairs bonus room is finished as a fourth bedroom to show that option. “Some people have in their minds that they should always buy a four-bedroom,” Laurie says. 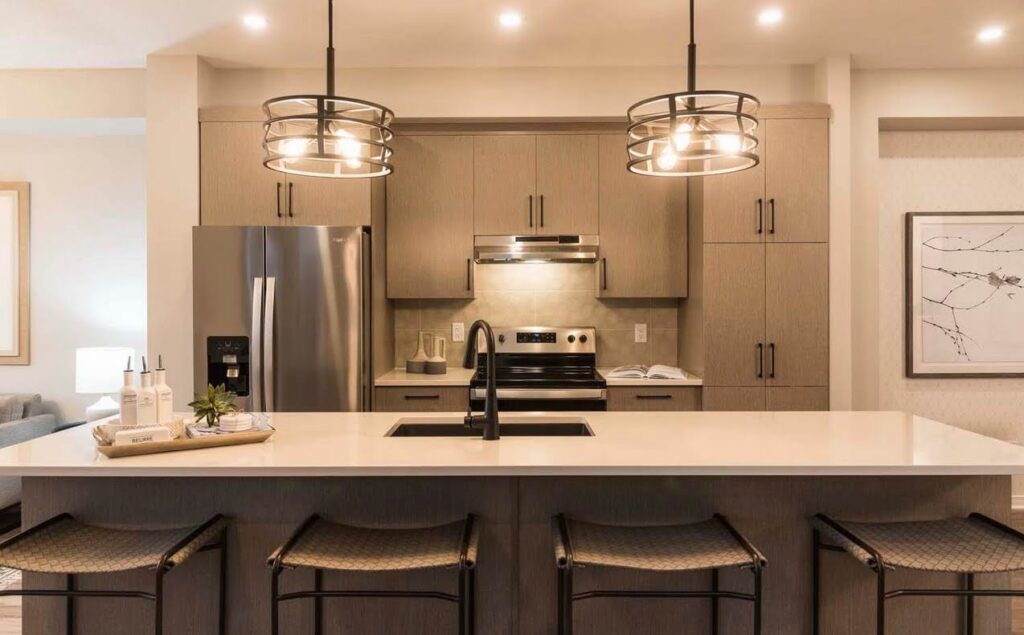 Meanwhile, Cardel’s townhome model, the Alder, feels like a single and is the builder’s most popular town. As an end unit, it benefits from extra windows, the second floor has options to reconfigure the space and remove the included loft, and it includes a finished basement. There’s also an incentive right now to include luxury vinyl tile throughout the main floor.

And the home has both a dining area and an eating nook. In the model, the nook is decorated as a work station, although Laurie says some buyers use the space as a play area.

Photo galleries of the models can be seen at cardelhomes.com (virtual tours should be available soon).

Tartan’s current model at EdenWylde is temporary, built to bridge the gap until construction is finished on its permanent EdenWylde models and sales centre, which will feature updated exteriors that Tartan has been working on, says sales manager Kyrie Warren.

The model, the two-storey single Ashton, is one of Tartan’s most popular floor plans and has been built with no upgrades, something Tartan does with one of the models at all of its sites.

“We’re quite confident and happy with what we offer as a standard home, so we like to showcase that to people,” she says. 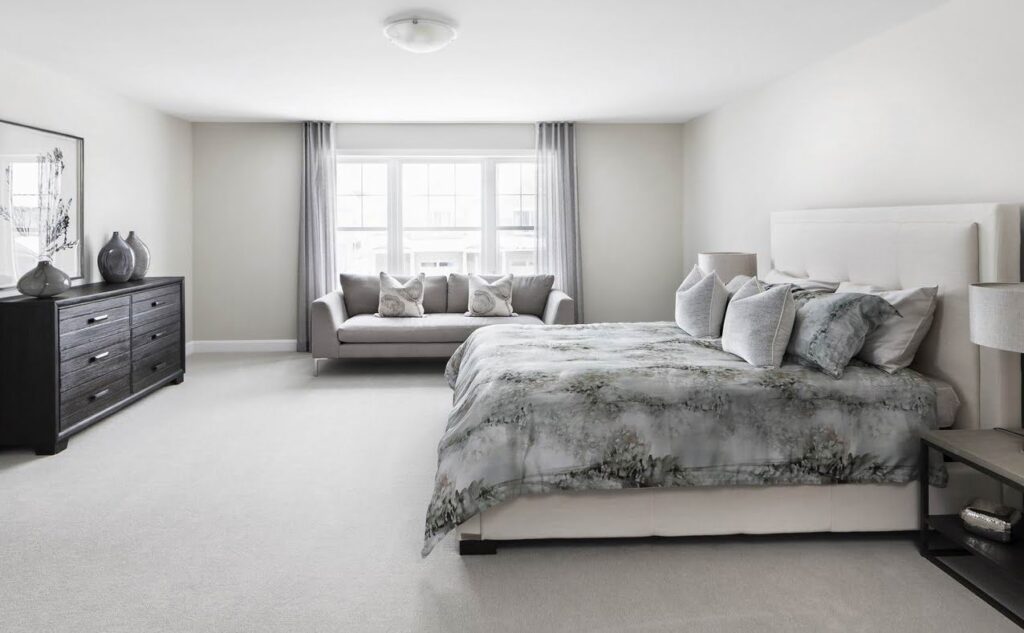 Adds design centre manager Anna Riopelle, “We wanted to show the purchaser what exactly they are getting… You don’t have to expect to upgrade to get something that looks quite nice.”

The four-bedroom home comes with 2,600 square feet and features contemporary lines and a contrast of textures. It boasts a mudroom with built-in cabinetry, a main-floor office and generous-sized rooms.

“It’s a very popular layout,” says Warren. “It feels so big and open, with so many big windows along the back of the house… It’s a very good use of space.”

The new models Tartan has coming will include another Ashton, this time with upgrades, and the smaller Capella single, which will be the model with no upgrades.

You can see a photo gallery of the current model and a video tour of another Ashton model at tartanhomes.com. 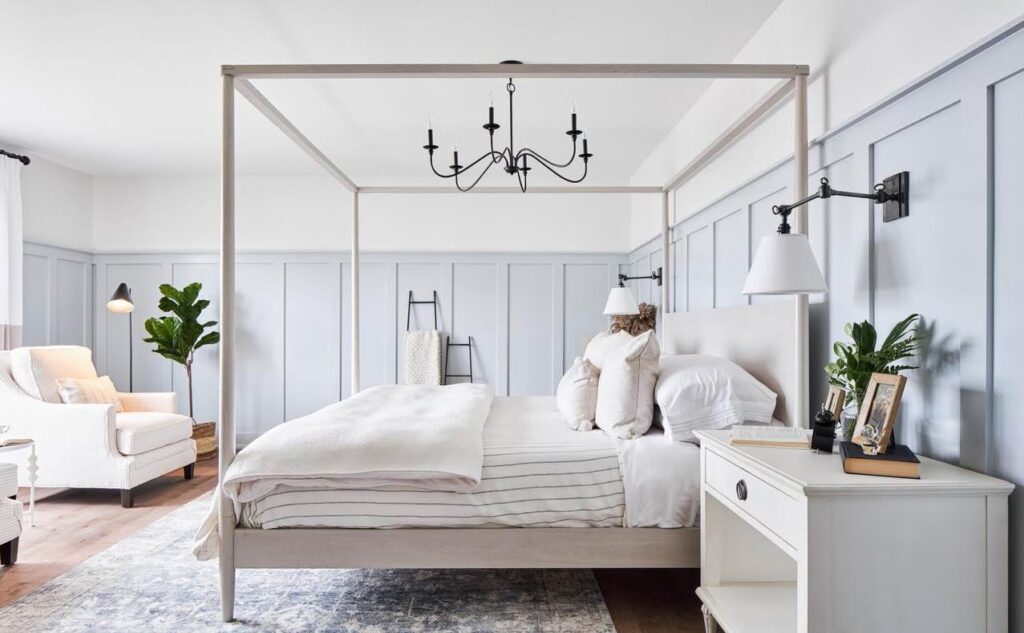 Tamarack’s seven EdenWylde models are still being finished and even once they are they will only be open virtually, but in the meantime Tamarack is selling from nearby Westwood, where it has two single-family home models, the Sable and the St. James II.

Sales rep Deborah Denison points out that Tamarack is not selling two-storey singles at EdenWylde, but the homes at least give a sense of what the company builds.

As with many of Tamarack’s models, the Westwood singles feature interiors by designer Sonya Kinkade, who has a penchant for creating model homes with personality, rather than keeping them as neutral as possible to appeal to a wider audience.

“I know some of (the homes) people will go in and say, ‘Oh, this is not my style.’ But then they go on to the next one and say, ‘Oh, OK, this is something that I like,’” says Kinkade. “People really need to see what they can become instead of just a bland space.” 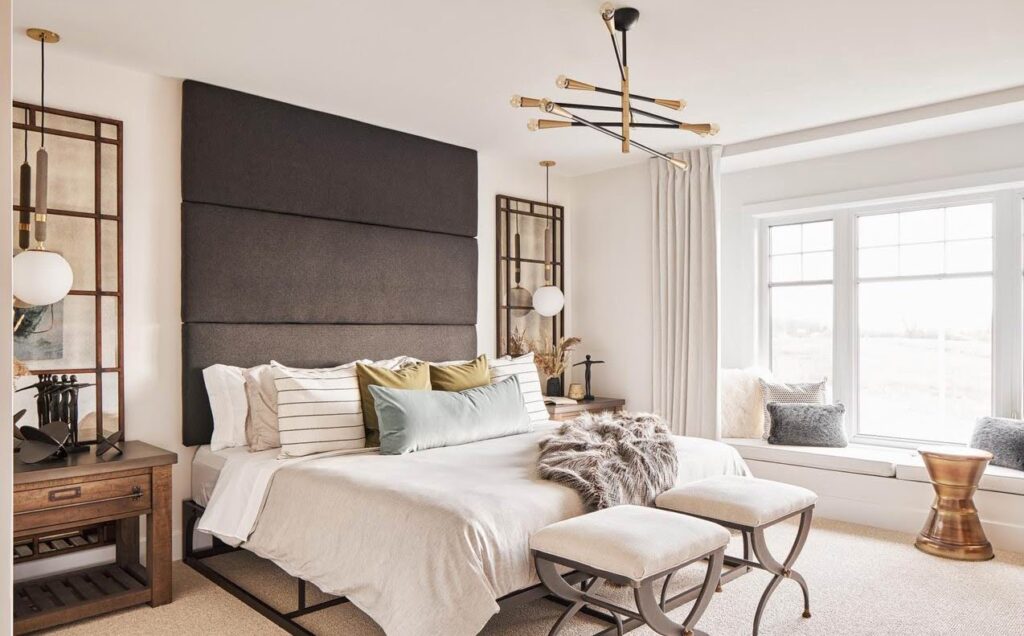 She’s stayed true to form in these two homes. The smaller Sable is “contemporary verging on modern,” with emphasis placed on the kitchen. It’s done in dramatic black and white oak, with an elongated island, a wine bar and a quartz slab backsplash.

“I really wanted it to be an entertaining space,” she says. “It’s got the wow factor to it.”

The home is 2,360 square feet, has four bedrooms and includes a main-floor office. 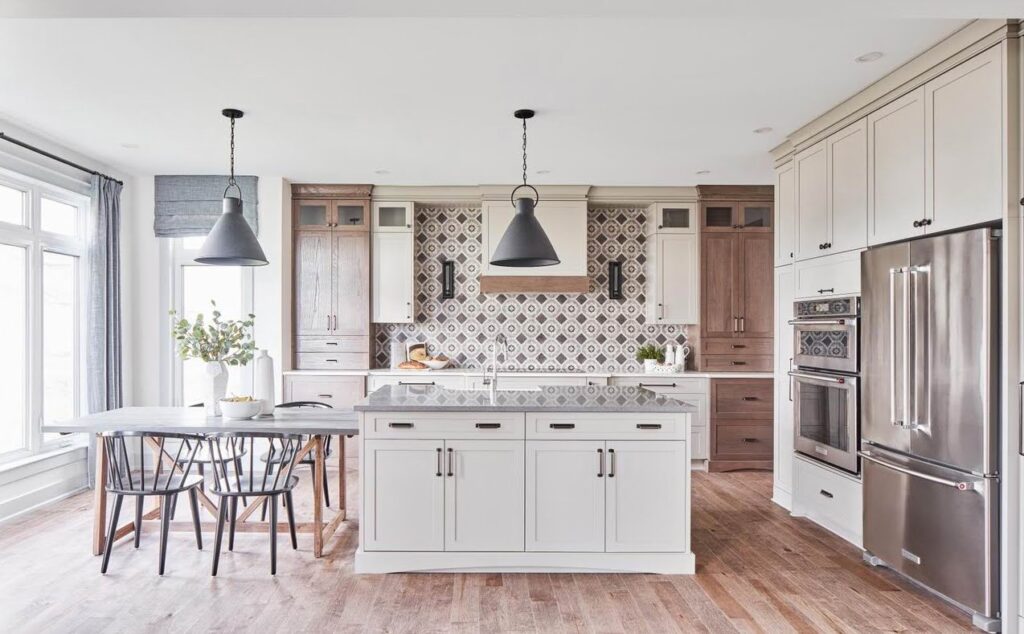 Although a modern farmhouse style, the St. James II by Tamarack is infused with European touches in the backsplash and grey-green cabinetry mixed with wood. Photo: JVLphoto.com

The contrast between the Sable and the second model, the St. James II, is striking. The St. James is also a four-bedroom with a main-floor office, but it’s much larger, at 3,190 square feet.

It features soft tones, accents of wall panelling and shiplap (but not too much), and a quiet sophistication.

Both homes have 3D walk-through virtual tours at tamarackhomes.com. 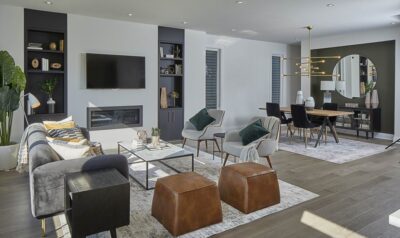 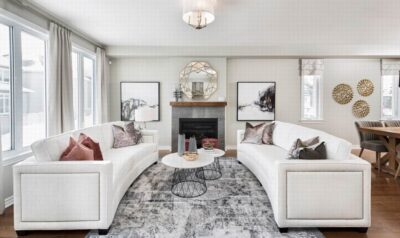 EdenWylde development profile
Get regular updates on our latest articles