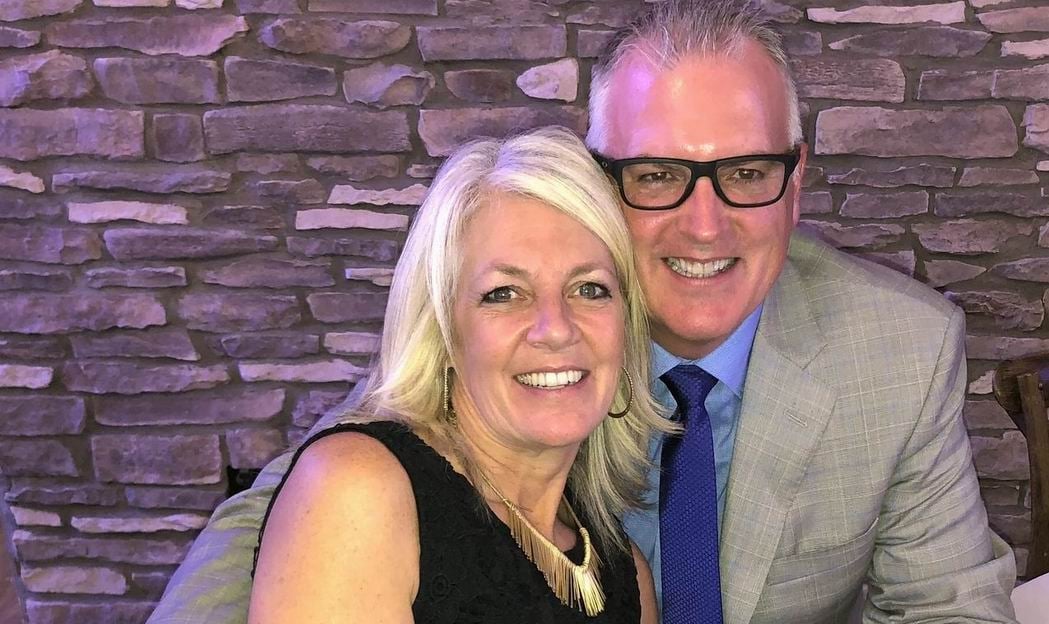 Harley Wallin and Sue Walton bought a Cardel home that allows them to blend their families together, offering a main-floor bedroom suite for his mother and private space for her special needs son.

Builders have long touted flex spaces in their floor plans as a way to adapt to the needs of buyers — a main-floor den that could be a bedroom, a dining room that becomes an office. But something unusual is beginning to happen in Ottawa’s new-home market: the introduction of truly flexible floor plans to more effectively meet the needs of today’s diverse families.

Multi-generational homes, accessible design, income properties: once the foray of custom builders or extensive renovations, now there are several examples of these possibilities in suburban new builds. While still not the norm, these new-home options are providing much-needed variety for a divergent demographic of buyers.

Harley Wallin calls his situation “our little Brady Bunch family dynamic” in reference to the 1960s sitcom about a blended family. In Wallin’s case that means him, his mother, Denise, his partner, Sue Walton, and Walton’s special needs son, 19-year-old Dillon.

They began looking two years ago for a home that would offer a main-floor suite for Denise, dedicated private space for Dillon and enough room for Wallin and Walton.

When they finally discovered Cardel Homes’ Nichols model at Creekside in Richmond, they knew they had found the perfect home. 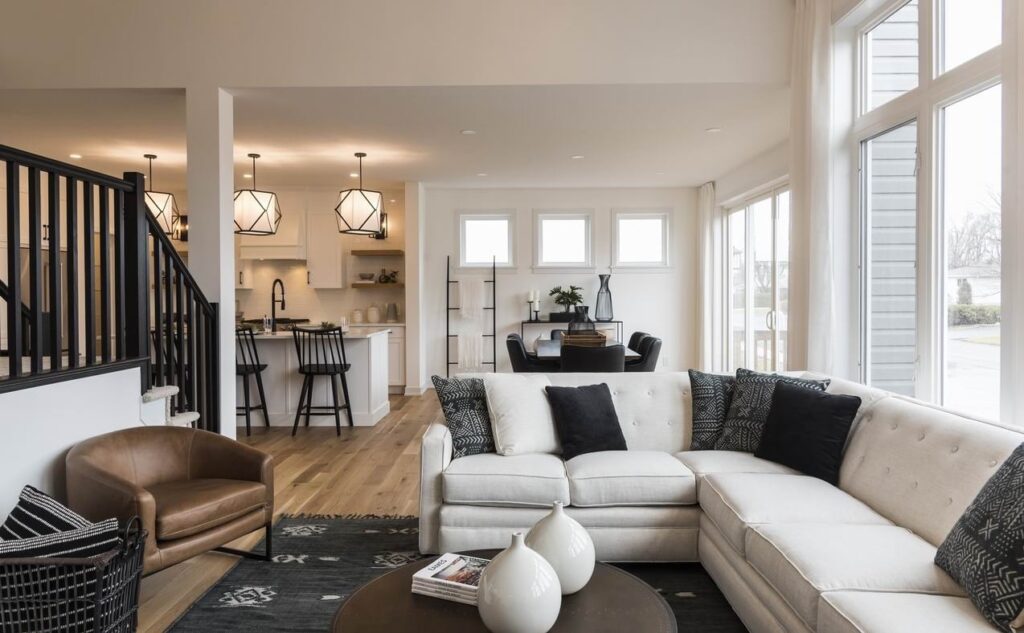 “It just works for everybody and we just really felt all four people were going to be able to get what they needed in a home comfortably,” says Wallin. “Everybody has their little piece that works.”

Adds Walton: “We didn’t want to have to compromise on anything and this allowed us not to have to.”

The two-storey home comes with a flex room on the main floor that can be living space, a garage workshop, converted to a bedroom and ensuite or changed to a full in-law suite with its own living space and wet bar by also reconfiguring the great room that’s beside it.

Wallin and Walton have opted for the bedroom/bathroom space for Denise, while upstairs one of the four bedrooms will become a man cave for Dillon, another will be a combined guest room and office for Walton and Wallin will have his own office space on the main floor.

“It’s just perfect for what our needs are,” says Wallin.

The Nichols represents just one example of Cardel’s experimentation with flexible floor plans. 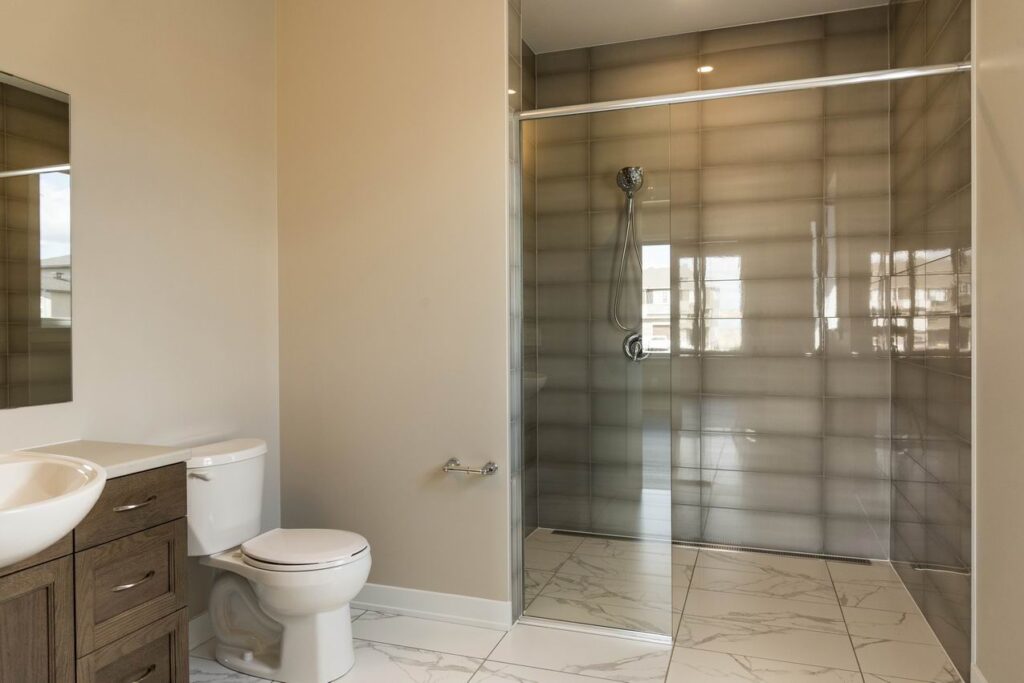 Two years ago, the builder unveiled extensive options created for its Lancaster bungalow that promoted accessibility and aging in place. Called the Independence Option, Cardel built an example of the home at Miller’s Crossing in Carleton Place to test the waters and start a dialogue on future housing needs.

“We built this to learn from it,” says vice-president of sales and marketing Tanya Buckley. “We didn’t build it to be an accessible home; we built it to adapt to needs as you go.”

The home included universal design features such as wider halls and doorways, lowered light switches, five-foot turning radiuses for manoeuvrability, no-transition flooring throughout, a relocated pantry and a curb-less shower.

“Often, more accessible homes can require significant renovations to an existing home or an entire custom home. We were hoping to create a standard option for independence that would be more attainable than the alternative custom home route to achieve a more accessible new home design,” says Catherine Buck, a drafting technologist at the time and now Cardel’s drafting manager, who was part of a special team of employees Cardel created to come up with design innovations like the Independence Option. 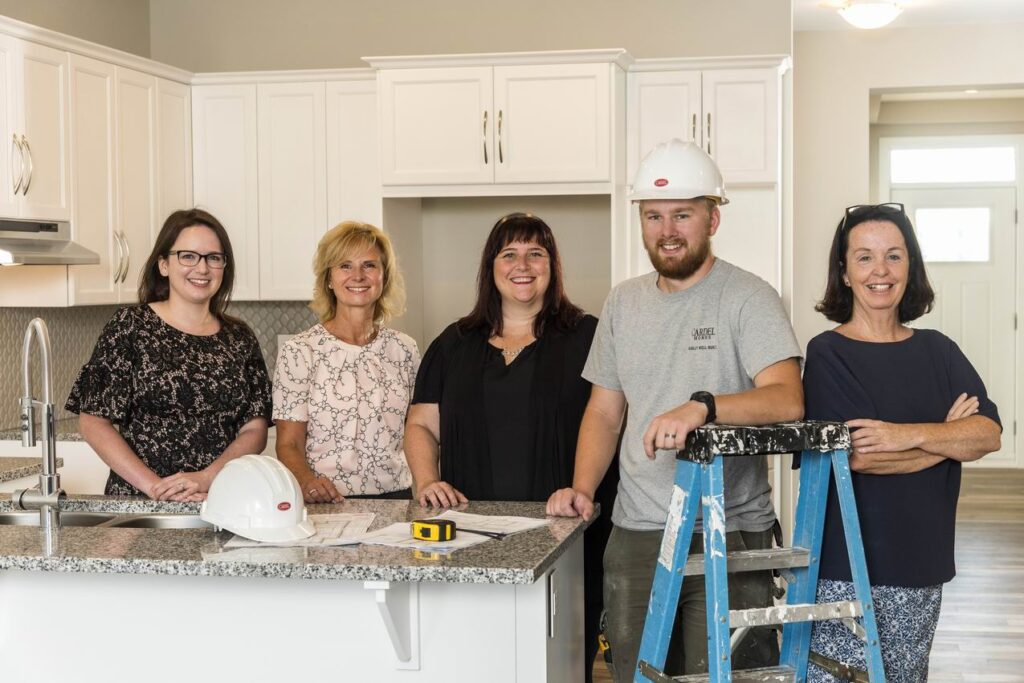 While the home was well-received, Buckley suspects the market was not quite ready to embrace the idea on a large scale.

“We wanted to throw it out there and get people thinking,” she says.

Cardel is still offering the accessible features, but rather than rolling these options out in other floor plans as they initially thought they might, the company is instead shifting gears to explore more flexible plans like the Nichols.

“We see that being the need right now,” she says. “We are working on a series of new plans aimed at addressing affordability through flexibility.”

As land and building costs continue to rise, Cardel is looking at ways to maximize square footage while taking different family models into account — they might be multi-generational, but they might be multiple couples or adult siblings living together because it’s more affordable.

“What we’re trying to do is create some flexibility and let clients choose how they create the floor plan that works for them.”

A new plan Cardel expects to release in a few months will have the option for a second master suite on the second floor, a main-floor bedroom-bathroom, as well as an optional side entry that can lead to a future separate suite in the basement. Income suites are not something Cardel is ready to offer yet, “but we’re showing clients what they could do with it,” says Buckley. 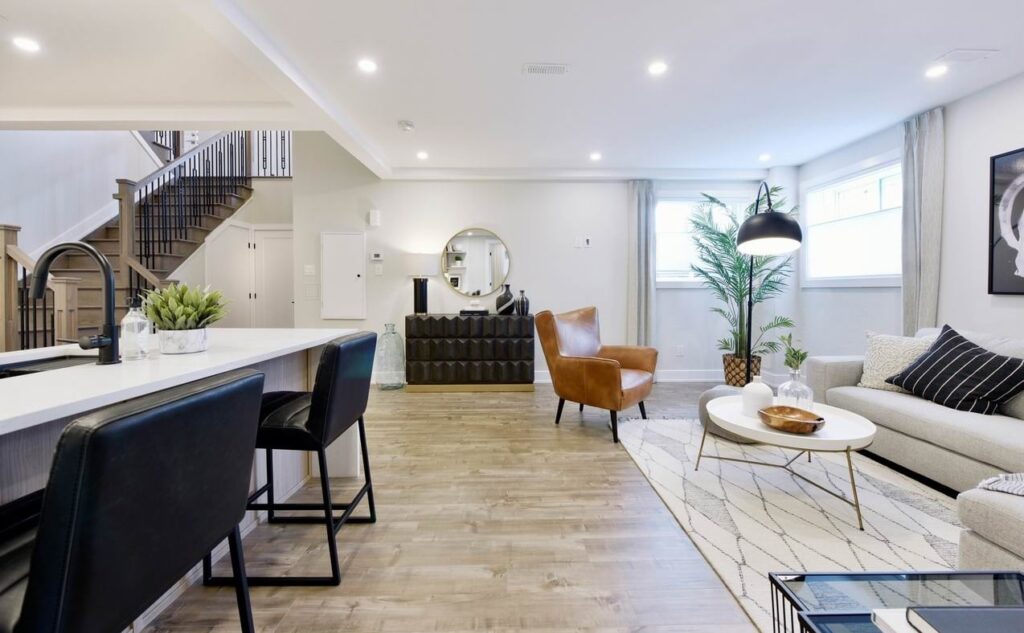 Phoenix Homes has already developed this type of floor plan, calling it the Income Series. The three homes in the series — a bungalow, a two-storey on a 35-foot lot, and a two-storey on a 50-foot lot — all include fully separate income suites in the basement.

Touted as income-generating suites for the “savvy investor,” vice-president of operations Rahul Kochar says the homes are appealing more often than not to multi-generational families.

As someone who lives in a multi-generational home himself, he can appreciate the benefits and the desire to live with extended family.

“You can have your family together and yet you can be apart.” 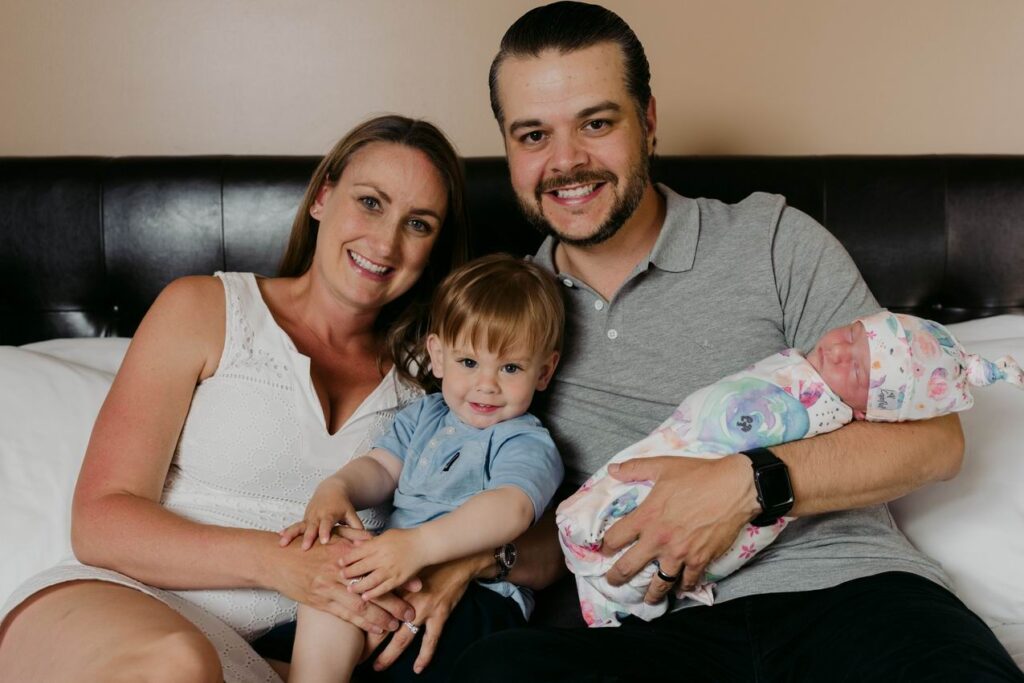 For young parents Jessica and Jeff Harris, the separate unit that comes with Phoenix’s Miraposa Plus Income Series home means his parents can move in with them while still having their own home.

That separated togetherness is something that appeals to Jeff and Jessica Harris, who are waiting to move into their Miraposa Plus Income Series home by Phoenix at Pathways at Findlay Creek. The young family — they have a toddler and a newborn — will be joined by Jeff’s parents, who are selling their larger family home and downsizing to the basement suite while Jeff and Jessica move up from a townhome to the larger two-storey home upstairs.

“It gives them a bit more freedom,” Jeff says of his parents, who are looking to retire soon and do some travelling. “And they get to be with the grandkids… It’s a really nice benefit for all of us.” 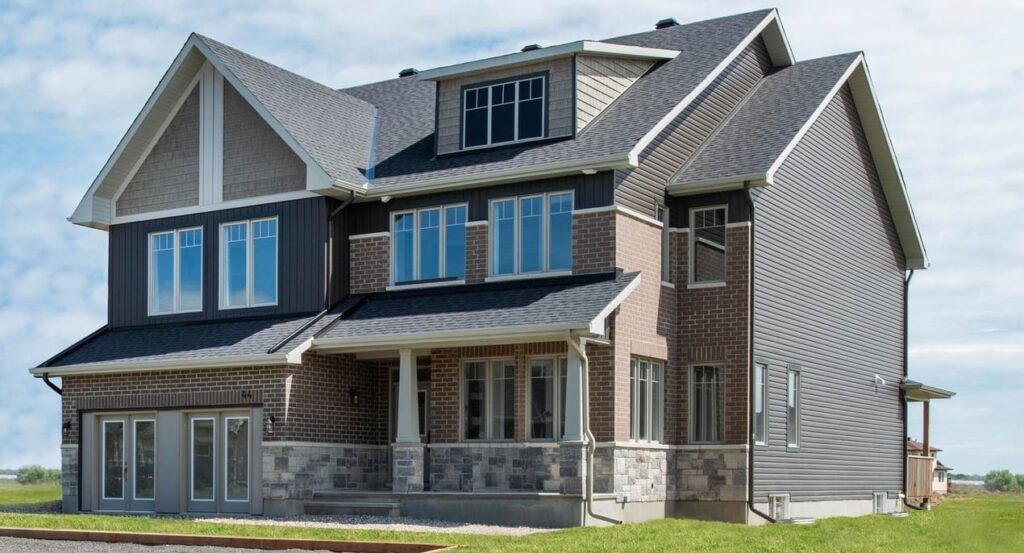 Phoenix’s newest model home at Diamondview Estates, the Newington, is a ‘simplified version’ of its Income Series homes. Although it does not have a fully separated income unit, it offers a main-floor suite for multi-generational families. Photo: Gordon King Photography

Kochar says the Income Series has proved popular — a dozen of the homes have sold so far — prompting Phoenix to create another multi-generational home. Called the Newington and just built as a model with accessible features at the builder’s Diamondview Estates development, Kochar says it’s a “simplified version of a multi-generational” home. Rather than having a fully separate unit, this home features a ground-floor bedroom with an ensuite. 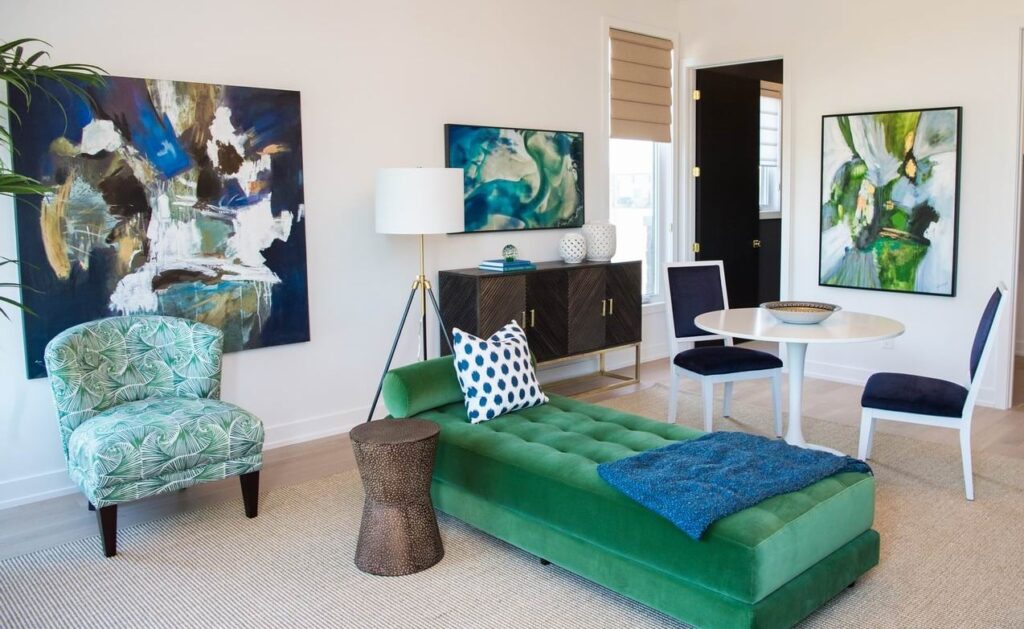 Other builders have incorporated a ground-floor suite into their floor plans as well. A key feature of Minto Communities’ 2018 Dream Home was the main-floor in-law suite, which boasted 473 square feet of living space, a walk-in closet, accessible ensuite and a wet bar.

Although the home was based on a plan that is no longer offered, Minto is developing two new designs expected to be released this fall that can include main-floor suites as optional flex plans. In a buyer survey Minto conducted this month, the builder found that while there is interest in main-floor guest suites (five per cent said it was the most important feature in their search), it’s not enough to make them a standard feature. 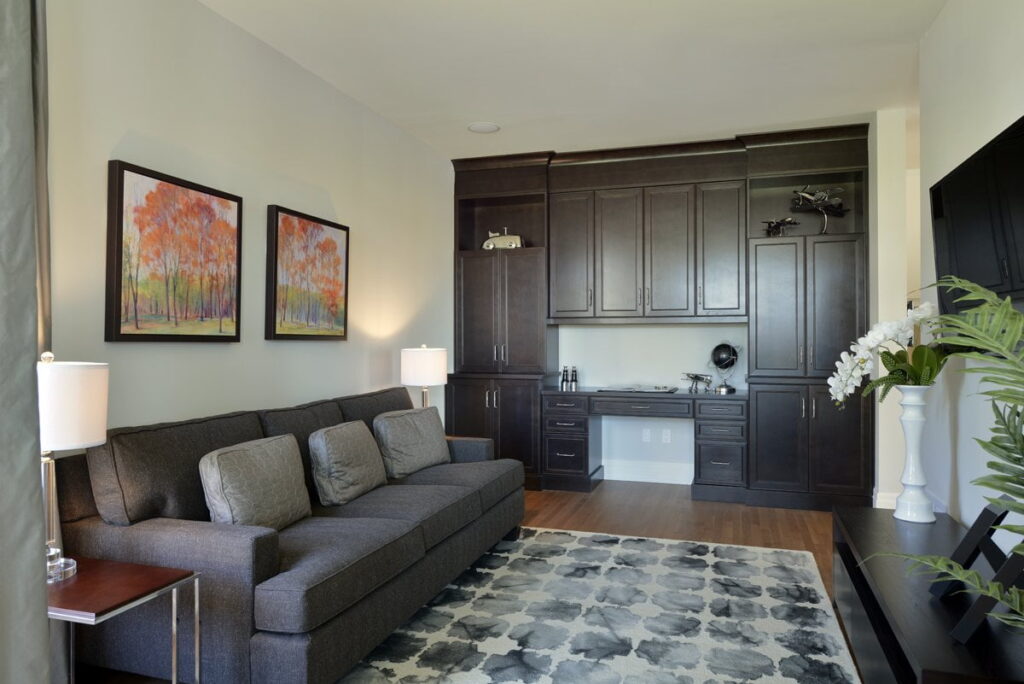 Although the Winfield model by HN Homes is built with the main-floor den, an option for the space is to have it become a bedroom with bathroom. Photo: Gordon King Photography

“We have offered this option since day one for multi-generational families, which in our experience are the people purchasing these floor plans,” says Vasi Jackson, HN’s communications and marketing co-ordinator. 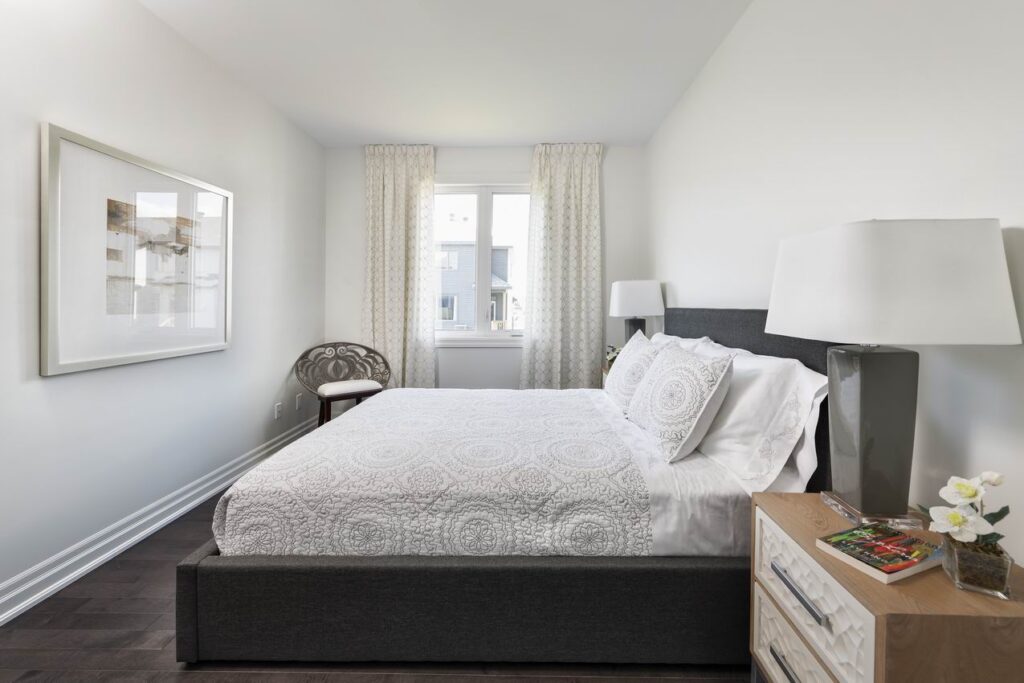 In the Riviera model at Pathways at Findlay Creek, eQ Homes has converted the den and part of the oversized garage into a main-floor bedroom and ensuite to showcase the multi-generational potential of the home. Photo: Metropolis Studio

And eQ Homes’ award-winning Riviera model at Pathways at Findlay Creek is another example of an optional main-floor in-law suite.

“It’s perfect for inter-generational families, those with adult children at home, or anyone who wants the flexibility to offer guests their own space,” marketing and brand manager Tobin Kardish said when the model opened. 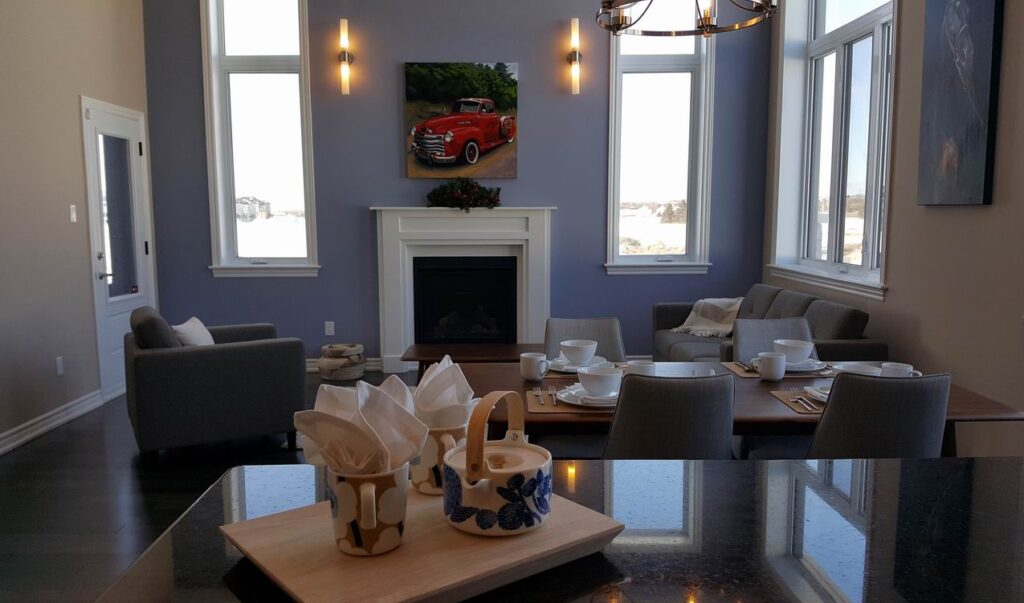 Metric’s Home Within a Home model at Trail View is a two-storey home attached to a bungalow that from the outside looks like one home. A connecting interior door allows easy access between the two homes. Photo: AllThingsHome.ca

Veering into the more custom side, builder Metric Homes, which has developments in Kanata and Richmond, has its own version of income properties. Called Home Within a Home, the floor plans — like Phoenix — feature fully separated income suites “perfect for a multi-generational family,” says co-owner and vice-president of operations Shawn Bernier.

“And with COVID-19 we are seeing a renewed interest in the concept as clients begin to see shortcomings of retirement facilities. The Home Within a Home concept allows these families to live together ‘safely’ while also having enough space and privacy to go on with their day-to-day lives.”

The COVID issue is something Cardel is seeing as well.

“There’s no question that COVID’s having an impact on how we think about designing our product and our homes,” says Buckley. That impact is reflected not just in whether or not to have parents move in with you, but also working from home, she says.

For Cardel sales representative Dale Laurie, the question of work space is also an important one. “People want to have the space for an office. I think people are going to look at things so differently moving forward. The home is going to be so much more important, not just a place to sleep anymore.”